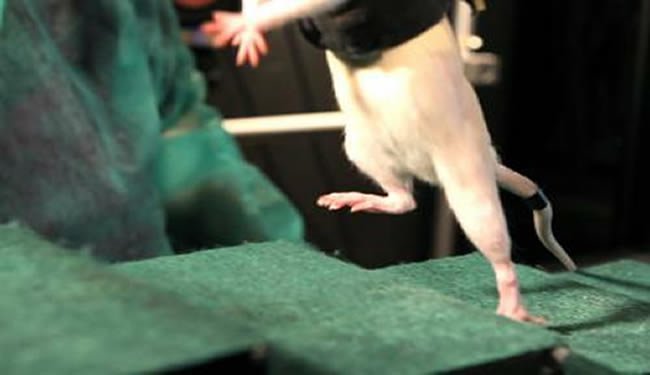 Neuroprosthetics and robot rehabilitation wake up the ‘spinal brain’ and restore voluntary movement.

Rats with spinal cord injuries and severe paralysis are now walking (and running) thanks to researchers at EPFL. Published in the June 1, 2012 issue of Science, the results show that a severed section of the spinal cord can make a comeback when its own innate intelligence and regenerative capacity is awakened. The study, begun five years ago at the University of Zurich, points to a profound change in our understanding of the central nervous system. According to lead author Grégoire Courtine, it is yet unclear if similar rehabilitation techniques could work for humans, but the observed nerve growth hints at new methods for treating paralysis.

“After a couple of weeks of neurorehabilitation with a combination of a robotic harness and electrical-chemical stimulation, our rats are not only voluntarily initiating a walking gait, but they are soon sprinting, climbing up stairs and avoiding obstacles when stimulated,” explains Courtine, who holds the International Paraplegic Foundation (IRP) Chair in Spinal Cord Repair at EPFL.

Waking up the spinal cord

It is well known that the brain and spinal cord can adapt and recover from moderate injury, a quality known as neuroplasticity. But until now the spinal cord expressed so little plasticity after severe injury that recovery was impossible. Courtine’s research proves that, under certain conditions, plasticity and recovery can take place in these severe cases—but only if the dormant spinal column is first woken up.

To do this, Courtine and his team injected a chemical solution of monoamine agonists into the rats. These chemicals trigger cell responses by binding to specific dopamine, adrenaline, and serotonin receptors located on the spinal neurons. This cocktail replaces neurotransmitters released by brainstem pathways in healthy subjects and acts to excite neurons and ready them to coordinate lower body movement when the time is right.

Five to 10 minutes after the injection, the scientists electrically stimulated the spinal cord with electrodes implanted in the outermost layer of the spinal canal, called the epidural space. “This localized epidural stimulation sends continuous electrical signals through nerve fibers to the chemically excited neurons that control leg movement. All that is left was to initiate that movement,” explains Rubia van den Brand, contributing author to the study.

Scientists wake up a dormant spinal column and restore voluntary lower body movement when stimulated. Grégoire Courtine of EPFL explains the methodology and results behind his current research, and what it could mean for people with spinal cord injury. Shared on Youtube.com with credit to EPFL/Grégoire Courtine

The innate intelligence of the spinal column

In 2009, Courtine already reported on restoring movement, albeit involuntary. He discovered that a stimulated rat spinal column—physically isolated from the brain from the lesion down—developed in a surprising way: It started taking over the task of modulating leg movement, allowing previously paralyzed animals to walk over treadmills. These experiments revealed that the movement of the treadmill created sensory feedback that initiated walking—the innate intelligence of the spinal column took over, and walking essentially occurred without any input from the rat’s actual brain. This surprised the researchers and led them to believe that only a very weak signal from the brain was needed for the animals to initiate movement of their own volition.

To test this theory, Courtine replaced the treadmill with a device that vertically supported the subjects, a mechanical harness did not facilitate forward movement and only came into play when they lost balance, giving them the impression of having a healthy and working spinal column. This encouraged the rats to will themselves toward a chocolate reward on the other end of the platform. “What they deemed willpower-based training translated into a fourfold increase in nerve fibers throughout the brain and spine—a regrowth that proves the tremendous potential for neuroplasticity even after severe central nervous system injury,” says Janine Heutschi, co-author in the study.

First human rehabilitation on the horizon

Courtine calls this regrowth “new ontogeny,” a sort of duplication of an infant’s growth phase. The researchers found that the newly formed fibers bypassed the original spinal lesion and allowed signals from the brain to reach the electrochemically-awakened spine. And the signal was sufficiently strong to initiate movement over ground—without the treadmill—meaning the rats began to walk voluntarily towards the reward, entirely supporting their own weight with their hind legs.

“This is the world-cup of neurorehabilitation,” exclaims Courtine. “Our rats have become athletes when just weeks before they were completely paralyzed. I am talking about 100% recuperation of voluntary movement.”

In principle, the radical reaction of the rat spinal cord to treatment offers reason to believe that people with spinal cord injury will soon have some options on the horizon. Courtine is optimistic that human, phase-two trials will begin in a year or two at Balgrist University Hospital Spinal Cord Injury Centre in Zurich, Switzerland. Meanwhile, researchers at EPFL are coordinating a nine million Euro project called NeuWalk that aims at designing a fully operative spinal neuroprosthetic system, much like the one used here with rats, for implanting into humans.