Scientists have identified an additional group of cells in the brain responsible for keeping us awake: the supramammillary nucleus, part of the caudal hypothalamus.

Neurologists had suspected that a component of the “ascending arousal system” could be found in this part of the brain for more than 100 years, but the precise location had been a mystery. In mice, activating this region using targeted chemical genetic techniques resulted in prolonged wakefulness during the animals’ normal sleep periods.

The results are scheduled for publication in Nature Communications.

In humans, this region could be a target for bringing some brain injury patients out of a comatose state via electrical stimulation, says lead author Nigel Pedersen, MD, assistant professor of neurology at Emory University School of Medicine and an epilepsy specialist at Emory Brain Health Center.

The supramammillary nucleus was known for its connections to the hippocampus, important for memory formation, and parts of the frontal cortex involved in focused attention, Pedersen says.

“Given these connections, this region may be important for the voluntary maintenance of wake and attention, but more work is needed to study this,” he says.

Pedersen conducted the research with Clifford Saper, MD, PhD, and Patrick Fuller, PhD, at Harvard Medical School and Beth Israel Deaconess Medical Center. Pedersen is continuing work at Emory on the importance of the supramammillary nucleus in memory and learning, and studying its connections to the hippocampus in relation to epilepsy control.

For decades, neurologists had known that damage to the hypothalamus – including that seen in the mysterious post-World War I epidemic encephalitis lethargica – resulted in marked sleepiness. Now that the location and identity of the wake-promoting neurons are precisely defined, the supramammillary region joins other parts of the brain known as being involved in keeping people awake, such as the nearby lateral hypothalamus, the upper brain stem and basal forebrain.

In the current paper, Pedersen and his colleagues used genetic engineering techniques to selectively activate particular groups of cells in the brain. They did so with a combination of a designer drug (clozapine-N-oxide) and receptors engineered to be triggered only by that drug. They injected viral vectors carrying an activation switch into the hypothalami of mice, and then gave the mice clozapine-N-oxide.*

Investigators mapped precisely where their injections went and which ones promoted wakefulness; only those involving the supramammillary nucleus did. So what does having this part of the brain stimulated “feel like” for the mice?

“It’s hard to say, but they display a normal repertoire of behavior,” Pedersen says. “They’re not as wound up, and they don’t show stereotyped repetitive behaviors, as they would with stimulants. The main difference between these and normal mice is that there is no ‘quiet’ wakefulness or napping during the normally sleep-enriched daytime period.” 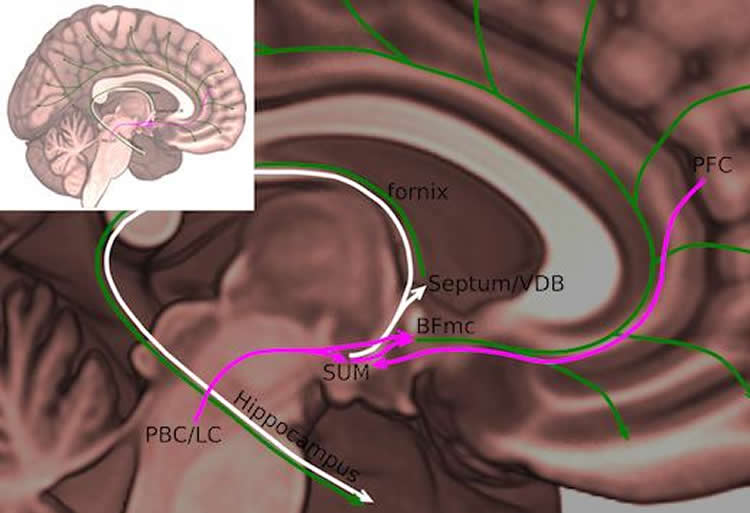 Inhibiting the same area of the brain with similar techniques increased the amount of time mice slept, especially non-REM (rapid eye movement) sleep, although sleep was not instant upon drug administration, as has been shown for other parts of the arousal system, Pedersen says.

Genetic manipulations also allowed the scientists to determine that the brain chemical glutamate was critical for wake signals. When the gene for a glutamate transporter VGLUT2 was snipped out of the supramammillary nucleus, artificial stimulation had no effect on wake and sleep.

The presence of the enzyme nitric oxide synthase was used to identify an especially potent wake-promoting group of neurons, but their functions still depend on glutamate release. The role of the gaseous neurotransmitter nitric oxide in this brain network is not yet known, Pedersen adds.

Funding: The research was supported by the National Institute of Neurological Disorders and Stroke (R25NS070682, R21NS082854, R01NS073613, R01NS092652, R01NS085477), the National Heart Lung and Blood Institute (P01HL095491) and an American Academy of Neurology and American Brain Foundation Clinician-Researcher Training Fellowship.

Supramammillary glutamate neurons are a key node of the arousal system