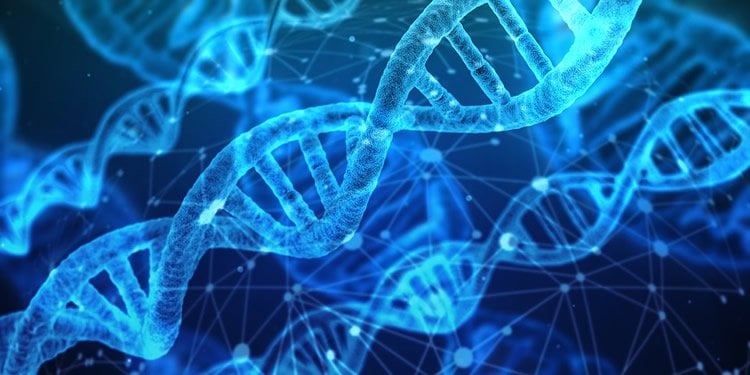 Although the NOTCH3 mutation causing AD is very rare in virtually all racial and ethnic groups, it is much more frequent in Ashkenazi Jews, and the researchers determined that nearly all of the AD cases with the NOTCH3 mutation were of that descent. The image is in the public domain.

Summary: Two rare genetic variants on the NOTCH3 and TREM2 genes have been identified in some Alzheimer’s patients.

These variants, one located in the NOTCH3 gene and the other in the TREM2 gene, were observed in persons with AD but not in any of the controls. According to the researchers, the NOTCH3 variant has not been implicated in AD in previous large genetic studies, however, other mutations in this gene cause a very rare form of dementia called CADASIL which begins with severe headaches and strokes in young adulthood followed by dementia by midlife (decades before the typical age when late-onset AD occurs).

Other mutations in the TREM2 gene have been associated with AD, and it was previously shown that persons who carry two copies of this particular mutation (referred to as Q33X) have a very rare disorder called Nasu-Hakola disease which is characterized by the onset of dementia in midlife and polycystic bone lesions with fractures.

“Our findings indicate that different mutations in the same gene or different number of copies of a particular mutation may lead to very distinct forms of dementia,” explained corresponding author Lindsay Farrer, Ph.D., chief of the Biomedical Genetics division at Boston University School of Medicine. “Discovery of associations of Alzheimer’s risk with rare genetic variants can lead to new insights about biological pathways involved in AD and strategies for developing novel treatments and biomarkers.”

These findings emerged from analyses of the entire DNA sequence for the portions of the genome that encode genes (called exons) of more than 5,600 participants with AD and nearly 4,600 cognitively healthy elderly controls. DNA sequence data were generated by the Alzheimer Disease Sequencing Project, a large NIH-funded initiative that emerged from the National Alzheimer’s Act of 2012, and screened for variants that were present in persons with AD but not in the controls. The researchers also showed that study participants with AD compared to controls had a significantly greater burden of mutations in genes known to have a role in AD.

Farrer believes that if the findings about the NOTCH3 mutation are confirmed in a large independent sample of Ashkenazi Jews, a diagnostic and predictive test for AD could be developed for that specific population.

Adults Sleep Better Together Than They Do Alone

Importance
Some of the unexplained heritability of Alzheimer disease (AD) may be due to rare variants whose effects are not captured in genome-wide association studies because very large samples are needed to observe statistically significant associations.

Design, Setting, and Participants
Genetic association study in which rare variants were identified by whole-exome sequencing in unrelated individuals of European ancestry from the Alzheimer’s Disease Sequencing Project (ADSP). Data were analyzed between March 2017 and September 2018.

Main Outcomes and Measures
Minor alleles genome-wide and in 95 genes previously associated with AD, AD-related traits, or other dementias were tabulated and filtered for predicted functional impact and occurrence in participants with AD but not controls. Support for several findings was sought in a whole-exome sequencing data set comprising 19 affected relative pairs from Utah high-risk pedigrees and whole-genome sequencing data sets from the ADSP and Alzheimer’s Disease Neuroimaging Initiative.

Results
Among 5617 participants with AD (3202 [57.0%] women; mean [SD] age, 76.4 [9.3] years) and 4594 controls (2719 [59.0%] women; mean [SD] age, 86.5 [4.5] years), a total of 24 variants with moderate or high functional impact from 19 genes were observed in 10 or more participants with AD but not in controls. These variants included a missense mutation (rs149307620 [p.A284T], n = 10) in NOTCH3, a gene in which coding mutations are associated with cerebral autosomal-dominant arteriopathy with subcortical infarcts and leukoencephalopathy (CADASIL), that was also identified in 1 participant with AD and 1 participant with mild cognitive impairment in the whole genome sequencing data sets. Four participants with AD carried the TREM2 rs104894002 (p.Q33X) high-impact mutation that, in homozygous form, causes Nasu-Hakola disease, a rare disorder characterized by early-onset dementia and multifocal bone cysts, suggesting an intermediate inheritance model for the mutation. Compared with controls, participants with AD had a significantly higher burden of deleterious rare coding variants in dementia-associated genes (2314 vs 3354 cumulative variants, respectively; P = .006).

Conclusions and Relevance
Different mutations in the same gene or variable dose of a mutation may be associated with result in distinct dementias. These findings suggest that minor differences in the structure or amount of protein may be associated with in different clinical outcomes. Understanding these genotype-phenotype associations may provide further insight into the pathogenic nature of the mutations, as well as offer clues for developing new therapeutic targets.