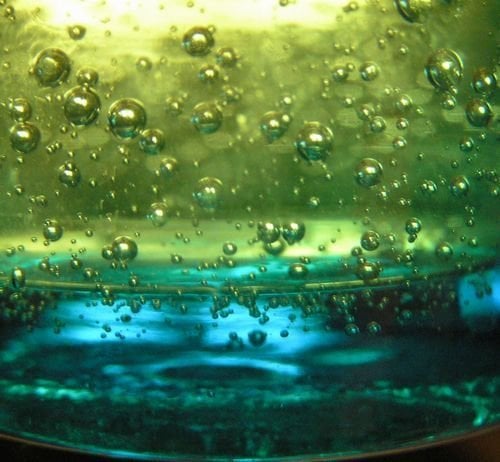 Neuroscientists at USC have discovered that carbonated drinks set off the same pain sensors in the nasal cavity as mustard, albeit at a lower intensity. During experimentation, researchers flowed carbonated saline over a dish containing nerve cells taken from the sensory circuits in the nose and mouth. They discovered that the gas activated a specific cell which serve as general pain sensors and expresses the TRPA1 gene.

Sparkling drinks spark pain circuits
Fizzy beverages light up same pain sensors as mustard and horseradish, a new study shows — so why do we drink them?

You may not think of the fizz in soda as spicy, but your body does.

The carbon dioxide in fizzy drinks sets off the same pain sensors in the nasal cavity as mustard and horseradish, though at a lower intensity, according to new research from the University of Southern California.

“Carbonation evokes two distinct sensations. It makes things sour and it also makes them burn. We have all felt that noxious tingling sensation when soda goes down your throat too fast,” said Emily Liman, senior author of a study published online in the Journal of Neuroscience.

That burning sensation comes from a system of nerves that respond to sensations of pain, skin pressure and temperature in the nose and mouth.

“What we did not know was which cells and which molecules within those cells are responsible for the painful sensation we experience when we drink a carbonated soda,” said Liman, an associate professor of neurobiology in the USC College of Letters, Arts and Sciences.

By flowing carbonated saline onto a dish of nerve cells from the sensory circuits in the nose and mouth, the researchers found that the gas activated only a particular type of cell.

These cells express a gene known as TRPA1 and serve as general pain sensors.

Now that carbonated beverages have been linked to pain circuits, some may wonder why we consume them. A new park in Paris even features drinking fountains that dispense free sparkling water.

Liman cited studies going back as far as 1885 that found carbonation dramatically reduced the growth of bacteria.

“Or it may be a macho thing,” she speculated.

If only a sip of San Pellegrino were all it took to prove one’s hardiness.

The pain-sensing TRPA1 provides only one aspect of carbonation’s sensory experience. In 2009, a group led by Charles Zuker of the University of California, San Diego and Nicholas Ryba of the National Institutes of Health showed that carbonation trips cells in the tongue that convey sourness.