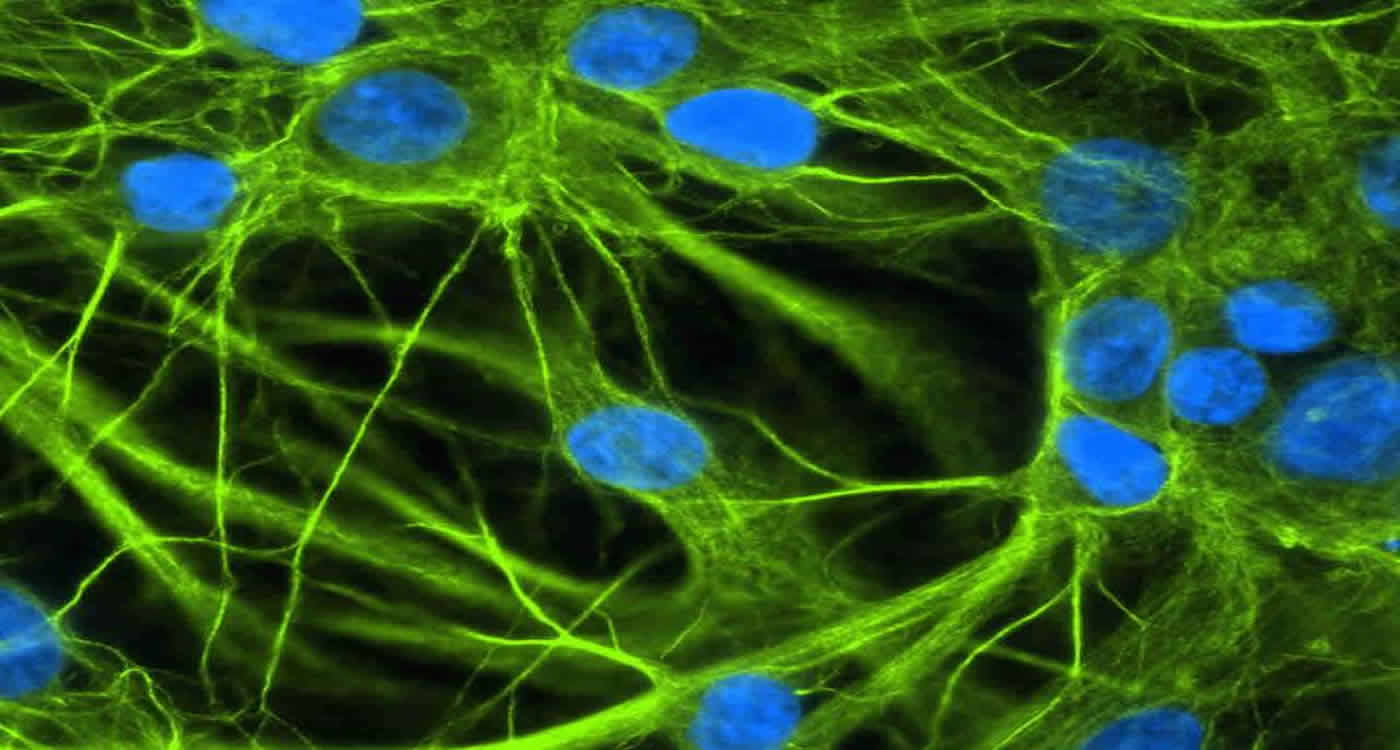 The parasite Toxoplasma gondii, which has infected an estimated one in four Americans and even larger numbers worldwide, forms astrocyte in the brain. The parasite can alter important functions within the brain. Image credit: Indiana University School of Medicine.

Researchers Discover Mechanism That May Help Parasites Manipulate Their Hosts

Rodents infected with a common parasite lose their fear of cats, resulting in easy meals for the felines. Now IU School of Medicine researchers have identified a new way the parasite may modify brain cells, possibly helping explain changes in the behavior of mice — and humans.

The parasite is Toxoplasma gondii, which has infected an estimated one in four Americans and even larger numbers worldwide. Not long after infecting a human, Toxoplasma parasites encounter the body’s immune response and retreat to a latent state, enveloped in hardy cysts that the body cannot remove.

Before entering that inactive state, however, the parasites appear to make significant changes in some of the brain’s most common, and critical cells, the researchers said. The team, lead by William Sullivan, Ph.D., professor of pharmacology and toxicology and of microbiology and immunology, reported two sets of related findings about those cells, called astrocytes, March 18 in the journal PLOS ONE.

Astrocytes are found throughout the brain and are involved in a variety of important brain structures and activities. Dr. Sullivan and his team evaluated the proteins in astrocyte cells and found 529 sites on 324 proteins where compounds called acetyl groups are added to proteins, creating a map called an “acetylome,” much like a map of all the genes in a particular species is known as its “genome.” In addition, 277 sites on 186 of the proteins had not been reported in previous studies of other types of cells. This process of acetylation can alter the function, location or other aspects of those proteins in the cells, providing new insight into how these cells operate in the brain.

Having created the first acetylome for astrocytes, the researchers then found a significant number of proteins that were acetylated differently in brain tissue infected with Toxoplasma parasites.

“We don’t know the impacts of these changes yet, but these discoveries could be particularly significant in understanding how the parasites persist in the brain and how this ‘rewiring’ could affect behavior in both rodents and humans,” Dr. Sullivan said.

In a separate article, newly published in the March 2015 issue of the popular science magazine Scientific American MIND, Dr. Sullivan and IU School of Medicine colleague Gustavo Arrizabalaga, Ph.D, professor of pharmacology and toxicology and of microbiology and immunology, describe research by others dating back to the 1980s showing that rodents infected with Toxoplasma behave differently, including not only being unafraid of cat odors, but actually attracted to them. In effect, research suggests, Toxoplasma modifies the host rodents’ brains so that the animals will be eaten and the parasites can make their way to the cat intestinal system — the only place where Toxoplasma can sexually reproduce.

Intriguingly — and much more speculatively, Drs. Arrizabalaga and Sullivan warn — some research has suggested that Toxoplasma infection could alter human behavior, and that changes could vary by gender. One study found that infected men tend to be introverted, suspicious and rebellious, while infected women tended to be extraverted, trusting and obedient. Others have suggested an association with schizophrenia.

“The studies in humans have been relatively small and are correlative. In contrast, the behavioral changes seen in mice infected with Toxoplasma are much better characterized, although we still don’t know the mechanisms the parasite employs to alter host behavior,” Dr. Sullivan said. “But our analysis of the astrocyte acetylome changes could move us toward better understanding of Toxoplasma‘s actions and the implications for behavioral impacts.”

Initial Toxoplasma infection generally causes symptoms similar to the flu, while the latent form of infection has little physical impact on healthy people. However, the parasites can become active again and cause tissue damage in people with compromised immune systems, such as patients receiving chemotherapy or infected with HIV.

In addition, if a woman’s initial infection with Toxoplasma occurs while she is pregnant, miscarriage or birth defects can result.

Humans can become infected if they don’t wash carefully after collecting cat litter containing Toxoplasma. Gardens and other areas frequented by wild and feral cats can become reservoirs for Toxoplasma, so experts recommend using gloves and masks when working in such areas. Unwashed vegetables and undercooked meats can also lead to Toxoplasma infection.

In addition to Dr. Sullivan, other contributors to the PLOS ONE paper were Anne Bouchut, Aarti R. Chawla, Victoria Jeffers and Andy Hudmon, all of the IU School of Medicine.

Support for the research was provided by funding from the National Institutes of Health grants NS078171 and AI106435.

Lysine acetylation is a reversible post-translational modification (PTM) that has been detected on thousands of proteins in nearly all cellular compartments. The role of this widespread PTM has yet to be fully elucidated, but can impact protein localization, interactions, activity, and stability. Here we present the first proteome-wide survey of lysine acetylation in cortical astrocytes, a subtype of glia that is a component of the blood-brain barrier and a key regulator of neuronal function and plasticity. We identified 529 lysine acetylation sites across 304 proteins found in multiple cellular compartments that largely function in RNA processing/transcription, metabolism, chromatin biology, and translation. Two hundred and seventy-seven of the acetylated lysines we identified on 186 proteins have not been reported previously in any other cell type. We also mapped an acetylome of astrocytes infected with the brain parasite, Toxoplasma gondii. It has been shown that infection with T. gondii modulates host cell gene expression, including several lysine acetyltransferase (KAT) and deacetylase (KDAC) genes, suggesting that the host acetylome may also be altered during infection. In the T. gondii-infected astrocytes, we identified 34 proteins exhibiting a level of acetylation >2-fold and 24 with a level of acetylation <2-fold relative to uninfected astrocytes. Our study documents the first acetylome map for cortical astrocytes, uncovers novel lysine acetylation sites, and demonstrates that T. gondii infection produces an altered acetylome.