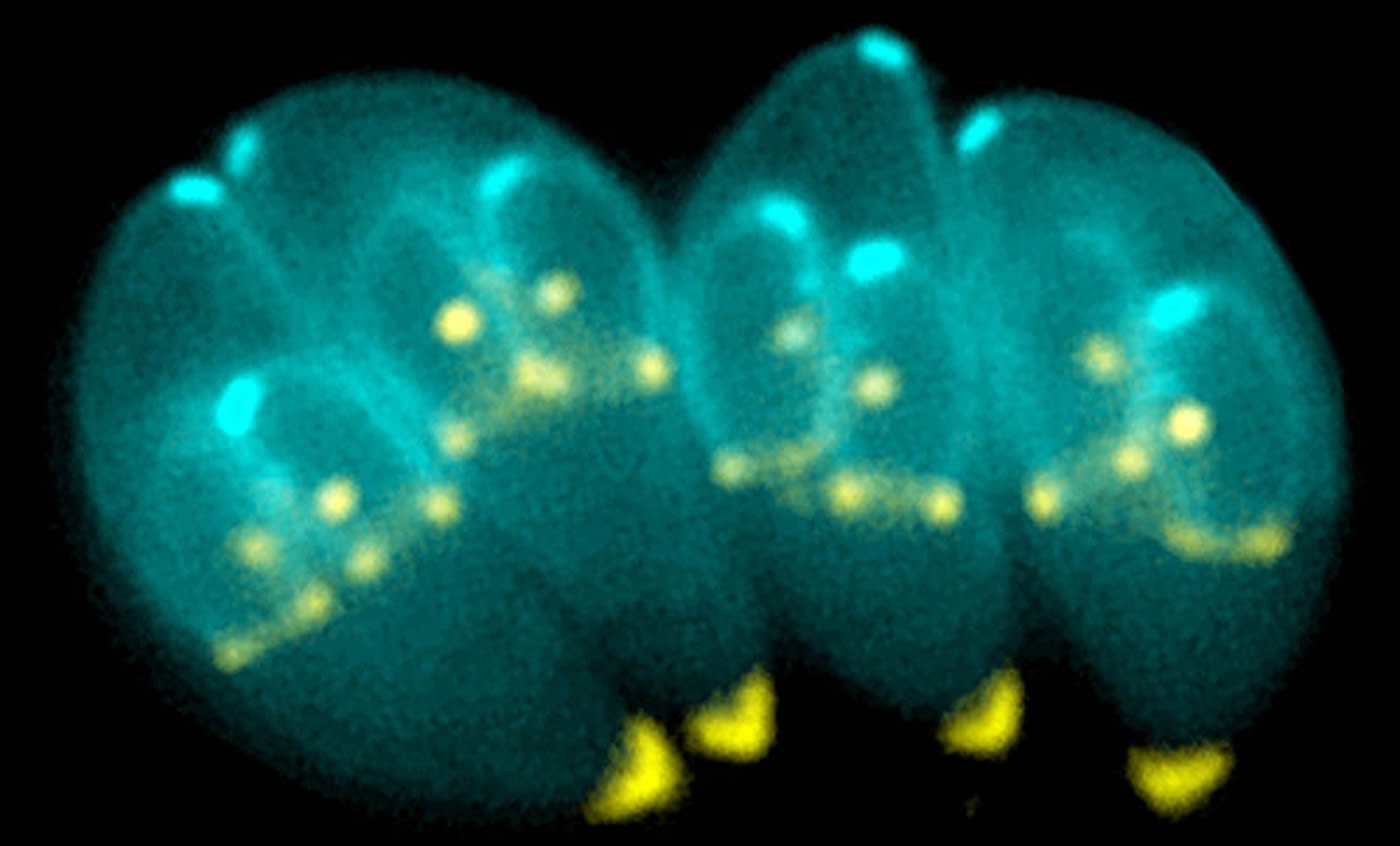 Toxoplasma is a common parasite transmitted by cats and found in raw meat. Around 30 per cent of the population is infected. Image is for illustrative purposes only and shows dividing T. gondii parasites Credit: Ke Hu and John Murray/PLOS ONE.

Melbourne researchers have discovered how a common parasite hijacks host cells and stockpiles food so it can lie dormant for decades, possibly changing its host’s behaviour or personality in the process.

The findings could lead to a vaccine to protect pregnant women from Toxoplasma infection, which carries a serious risk of miscarriage or birth defects, as well as drugs to clear chronic infections in people with compromised immune systems, such as cancer patients.

Toxoplasma is a common parasite transmitted by cats and found in raw meat. Around 30 per cent of the population is infected. The research projects were led by Dr Chris Tonkin, Dr Justin Boddey, Dr Alex Uboldi, Mr James McCoy and Mr Michael Coffey from the Walter and Eliza Hall Institute.

Dr Tonkin said Toxoplasma required a human host cell – such as a brain cell (neuron) – to live in. The research team discovered how the parasite hijacks the host cell to enable its own growth and survival, hibernating for decades by creating its own food reserve.

“Toxoplasma infection leads to massive changes in the host cell to prevent immune attack and enable it to acquire a steady nutrient supply,” Dr Tonkin said. “The parasite achieves this by sending proteins into the host cell that manipulate the host’s own cellular pathways, enabling it to grow and reproduce.”

Dr Boddey said some of these proteins might even influence the behaviour of the host. “There is a fascinating association between Toxoplasma infection and psychiatric diseases including schizophrenia and bipolar disorder. It is now possible to test whether proteins sent from the hibernating parasite into a host neuron disrupt normal brain function and contribute to development of these diseases,” he said.

Once Toxoplasma parasites establish infection, they can lie dormant in our bodies for the rest of our lives. In people with suppressed immune systems, such as cancer patients, the parasite can reactivate and cause neurological damage and even death.

Dr Tonkin said the teams had identified pathways that allow the parasite to establish chronic infections, unveiling potential avenues for treatment that clear the dormant parasite.

“We discovered that, similar to animals preparing for hibernation, Toxoplasma parasites stockpile large amounts of starch when they become dormant,” he said. “By identifying and disabling the switch that drives starch storage, we found that we could kill the dormant parasites, preventing them from establishing a chronic infection.”

Dr Tonkin said the finding could lead to a drug to clear chronic Toxoplasma infections, or even a vaccine to prevent infection in at-risk people, such as pregnant women.

“Cats are one of the primary transmitters of Toxoplasma parasites,” Dr Tonkin said. “If the parasites are transmitted to pregnant women, for example through contact with kitty litter, there is a substantial risk of miscarriage or birth defects.

“We hope to use our discoveries to develop a vaccine that stops cats transmitting the parasite, to prevent these potentially catastrophic consequences.”

Summary
Transmissible stages of Toxoplasma gondii store energy in the form of the carbohydrate amylopectin. Here, we show that the Ca2+-dependent protein kinase CDPK2 is a critical regulator of amylopectin metabolism. Increased synthesis and loss of degradation of amylopectin in CDPK2 deficient parasites results in the hyperaccumulation of this sugar polymer. A carbohydrate-binding module 20 (CBM20) targets CDPK2 to amylopectin stores, while the EF-hands regulate CDPK2 kinase activity in response to Ca2+ to modulate amylopectin levels. We identify enzymes involved in amylopectin turnover whose phosphorylation is dependent on CDPK2 activity. Strikingly, accumulation of massive amylopectin granules in CDPK2-deficient bradyzoite stages leads to gross morphological defects and complete ablation of cyst formation in a mouse model. Together these data show that Ca2+ signaling regulates carbohydrate metabolism in Toxoplasma and that the post-translational control of this pathway is required for normal cyst development.