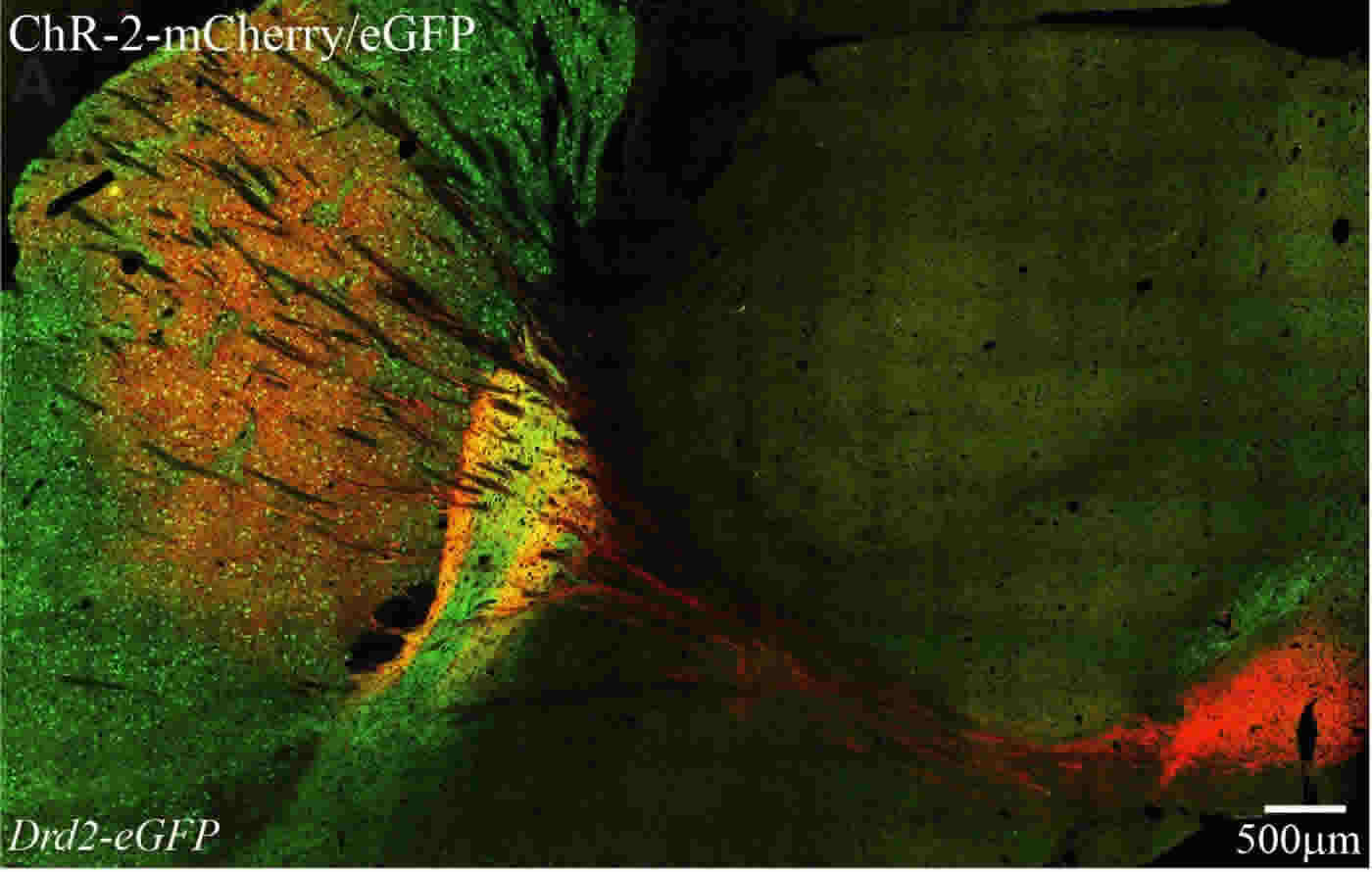 The virus stains in red the connections leaving the neostriatum wherever it is expressed, but not everywhere as was expected. In the engineered mouse strain the neurons were already fluorescent and the red mixed with the green to form an orangish-yellow hue in the locality of the neostriatum. Within this orangish-yellow zone, are green 'islands' which the virus spared. These are the 'patch' cell groupings. In regular mice, these areas would be a distribution of dark patches. Image credit: OIST.
Home
Electrophysiology

Researchers at the Okinawa Institute of Science and Technology Graduate University’s Brain Mechanisms for Behaviour Unit have found a surprise upon mapping the precise connectivity inside a brain structure called the neostriatum. The cell groups here do not seem to be talking to each other, and are less interdependent in their functioning than previously suspected. Their findings were published in Brain Structure and Function.

The neostriatum is part of a larger system in the brain that plans and executes voluntary movements. It consists of striosome (patch) and ‘matrix’ type neurons that are grouped separately. But these groupings still interweave in a three dimensional labyrinth. The lack of cross-talk between them revealed by this study has implications for studying diseases like Parkinson’s, which afflicts the nervous system.

In a human Parkinson’s patient, the neostriatum is depleted of the messenger chemical dopamine, which helps regulate and strengthen motor responses in the brain. These patients have extraordinary difficulty starting mundane activities like standing or walking. Yet they do rise to the occasion during emergencies, and sometimes even find stairs easier. This is a neuro-scientific puzzle.

The OIST researchers who published the findings study Parkinson’s in mice. They initially infected all the outputs leaving the neostriatum, with a virus that makes the cells sensitive to light. They expected all the connections to fire and the cells to light up in the neostriatum upon stimulating the brain slices. But to their surprise, some parts didn’t.

At this point, the experienced eye of the OIST unit’s head Prof. Gordon Arbuthnott recognized the distribution of these dark patches as the ‘patch’ compartments he had helped map years earlier. The virus had spared them. This fortuitous finding now allowed the researchers to stimulate the ‘patch’ and ‘matrix’ compartments separately. They could find no active connections between the two areas.

To find a behavioral link in mice, OIST researchers first trained hungry mice to reach for food pellets, then used the virus to temporarily deactivate all matrix compartments in a sub-part of the neostriatum that had been previously associated with forepaw use.

With only ‘patch’ cells at their disposal the mice failed to grasp the pellets, but kept reaching for them. Consistent failure did not discourage them, as it would healthy mice.

While the overall finding confirms older anatomical speculations about the ‘patch’ and ‘matrix’ groupings being independent, Prof. Arbuthnott is not entirely convinced.

The result opens new avenues for studying the neostriatum. While most research over the past decade has focused on mapping connections leaving it, the OIST result is possibly a gentle nudge in the right direction – inward, not outward.

“The simplest level of explanation I can think of is that one part makes the value judgment based on previous experience, and the other controls the movement. But is it really true that one part is doing one kind of calculation without consulting the other part? That’s the big question for me,” he said.