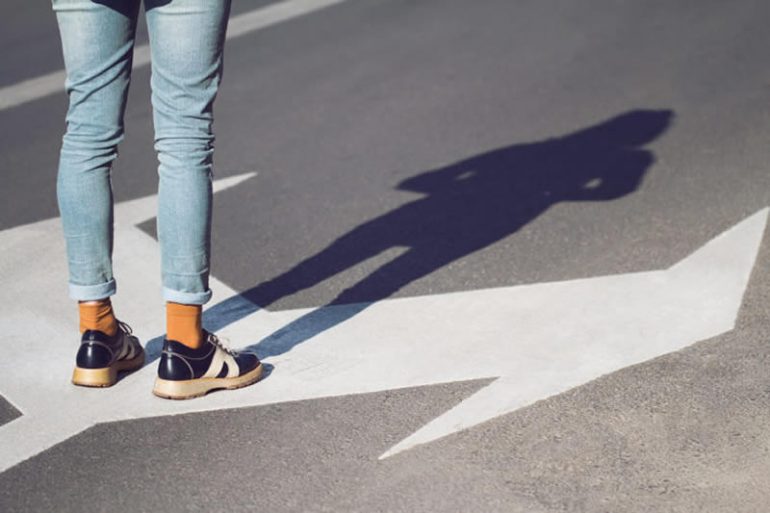 Using a virtual-navigation experiment, researchers found that stress hindered people’s ability to use memory to plan novel shortcuts. The image is adapted from the Stanford news release.

Summary: Stress generates lower levels of activity in the hippocampus and frontal-parietal lobe networks, hindering the ability to make certain decisions and plan ahead.

New research from Stanford University has found that stress can hinder our ability to develop informed plans by preventing us from being able to make decisions based on memory.

“We draw on memory not just to project ourselves backward into the past but to project ourselves forward, to plan,” said Stanford psychologist Anthony Wagner, who is the senior author of the paper detailing this work, published April 2 in Current Biology. “Stress can rob you of the ability to draw on cognitive systems underlying memory and goal-directed behavior that enable you to solve problems more quickly, more efficiently and more effectively.”

Combined with previous work from Wagner’s Memory Lab and others, these findings could have broad implications for understanding how different people plan for the future – and how lack of stress may afford some people a greater neurologically-based opportunity to think ahead.

“It’s a form of neurocognitive privilege that people who are not stressed can draw on their memory systems to behave more optimally,” said Wagner, who is the Lucie Stern Professor in the Social Sciences at Stanford’s School of Humanities and Sciences. “And we may fail to actually appreciate that some individuals might not be behaving as effectively or efficiently because they are dealing with something, like a health or economic stressor, that reduces that privilege.”

The researchers conducted experiments where they monitored participants’ behavior and brain activity – via fMRI – as they navigated through virtual towns. After participants became very familiar winding routes in a dozen towns, they were dropped onto one of the memorized paths and told to navigate to a goal location.

To test the effects of stress, the researchers warned some participants that they could receive a mild electric shock, unrelated to their performance, during their virtual rambles. Participants who didn’t have to worry about being randomly shocked tended to envision and take novel shortcuts based on memories acquired from prior journeys, whereas the stressed participants tended to fall back on the meandering, habitual routes.

Prior to beginning their trek, the participants were virtually held in place at their starting position. Brain scans from this period showed that the stressed individuals were less likely than their counterparts to activate the hippocampus – a brain structure that would have been active if they were mentally reviewing previous journeys. They also had less activity in their frontal-parietal lobe networks, which allows us to bring neural processes in line with our current goals. Previous work by the researchers had found that stress hinders this neural machinery, making it harder for us to retrieve and use memories.

The researchers believe their new study is the first to show how hippocampal-frontal lobe network disruption takes memory replay offline during a planning session due to stress.

“Its kind of like our brain is pushed into a more low-level thought-process state, and that corresponds with this reduced planning behavior,” said Thackery Brown, who was a postdoctoral scholar in the Memory Lab during this research and is lead author of the paper.

Looking forward, the researchers are especially interested in how the relationship between stress and memory affects older populations, who often experience both health and economic issues. Older people are also more likely to be concerned about memory loss. Together, these combined stressors could contribute to a diminished ability to remember, which could further exacerbate their stress and also impair their ability to deal with it.

Brown has begun conducting studies similar to the virtual navigation experiments with participants between the ages of 65 and 80 to try to better understand how the associations between stress, memory and planning play out in older populations.

“It’s a powerful thing to think about how stressful events might affect planning in your grandparents,” said Brown, who is now an assistant professor at Georgia Institute of Technology. “It affects us in our youth and as we interact with and care for older members of our family, and then it becomes relevant to us in a different way when we are, ourselves, older adults.”

Stephanie Gagnon, PhD, ’18, is also co-author of this paper. Wagner is also a member of Stanford Bio-X and the Wu Tsai Neurosciences Institute.

Funding: This work was funded by the Brain and Behavior Research Foundation, the National Institutes of Health, the Marcus and Amalia Wallenberg Foundation (Marcus Wallenbergs Stiftelse för Internationellt Vetenskapligt Samarbete), the John Templeton Foundation, and the John D. and Catherine T. MacArthur Foundation.

More to Pictures Than Meets the Eye

Summary
The ability to anticipate and flexibly plan for the future is critical for achieving goal-directed outcomes. Extant data suggest that neural and cognitive stress mechanisms may disrupt memory retrieval and restrict prospective planning, with deleterious impacts on behavior. Here, we examined whether and how acute psychological stress influences goal-directed navigational planning and efficient, flexible behavior. Our methods combined fMRI, neuroendocrinology, and machine learning with a virtual navigation planning task. Human participants were trained to navigate familiar paths in virtual environments and then (concurrent with fMRI) performed a planning and navigation task that could be most efficiently solved by taking novel shortcut paths. Strikingly, relative to non-stressed control participants, participants who performed the planning task under experimentally induced acute psychological stress demonstrated (1) disrupted neural activity critical for mnemonic retrieval and mental simulation and (2) reduced traversal of shortcuts and greater reliance on familiar paths. These neural and behavioral changes under psychological stress were tied to evidence for disrupted neural replay of memory for future locations in the spatial environment, providing mechanistic insight into why and how stress can alter planning and foster inefficient behavior.