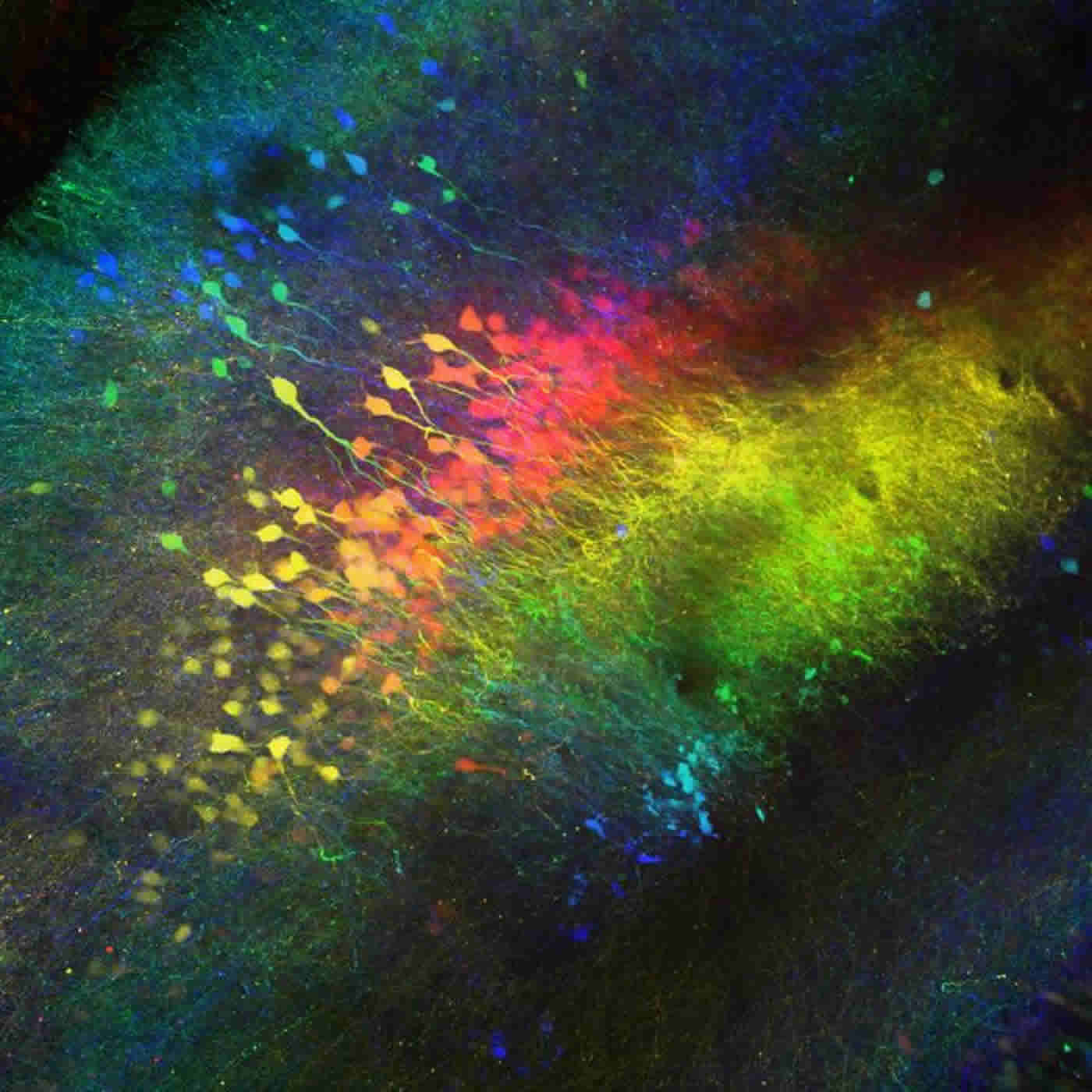 This is a composite image of neurons in the CA2 hippocampal region of a mouse. NeuroscienceNews.com image is credited to Felix Leroy and David H. Brann/Siegelbaum lab/Columbia's Zuckerman Institute.

Summary: A new study reports the CA2 region of the hippocampus controls both higher order cognition, like social memory, and instinctual behaviors, such as aggression. The findings could shed light on why abnormal social behaviors may occur in schizophrenia and other psychiatric illnesses.

Columbia scientists have identified a brain region that helps tell an animal when to attack an intruder and when to accept it into its home. This brain area, called CA2, is part of the hippocampus, a larger brain structure known to be critical for our memory of people, places, things and events.

CA2 was already known to specialize in social memory, the ability to remember encounters with others. Surprisingly, today’s findings reveal that a single brain region can control both higher-order cognition, like social memory, and an innate, instinctual behavior like social aggression. And because CA2 dysfunction has been implicated in psychiatric diseases, such as schizophrenia and bipolar disorder, these results provide further support that altered CA2 function may contribute to abnormal social behaviors associated with such illnesses.

This research was published today in Nature.

“Humans and mice are social creatures. We both engage in learned and innate social interactions that sometimes foster cooperation, and other times drive competition for mates, food and dominance. How the brain mediates these conflicting impulses has been a puzzling question,” said Steven A. Siegelbaum, PhD, the Gerald D. Fischbach, MD Professor and Chair of Neuroscience at Columbia University Irving Medical Center, principal investigator at Columbia’s Zuckerman Institute and the paper’s senior author.

“Today’s study in mice shows us that diminutive CA2, which is made up of just a few thousand cells, acts as a nexus of social behaviors, allowing memory to influence the decision to engage in social aggression,” he continued.

Although a great deal is known about the other regions of the hippocampus, the small size of CA2, coupled with its inaccessible location sandwiched between larger, neighboring areas, make it challenging to study. But in 2014, the Siegelbaum lab developed a genetic approach for turning CA2 on or off and discovered that this region is essential for social memory.

As a first step to determine whether CA2 may regulate other social behaviors, the researchers examined the brain regions that receive information from CA2. They found that CA2 sends a strong connection to the lateral septum, a brain region that had been known for some time to play an important role in limiting aggression. Indeed, both classic and more recent studies have shown that brain lesions to the lateral septum in several species, including humans, promote a hyper-aggressive state.

“CA2’s close ties to the lateral septum made us wonder whether it also played a role in this type of aggression,” said Felix Leroy, PhD, an associate research scientist in the Siegelbaum lab and the paper’s first author.

To find out, the researchers temporarily turned off CA2 in a mouse living alone in its home cage. They then introduced an intruder into the cage and observed the resulting behavior.

When CA2 was switched off, there was a marked decrease in the tendency of the residents to attack, compared to what would normally occur. This difference strongly suggested that CA2 normally acts to drive aggressive behavior, in addition to regulating social memory.

But why would a brain region that controls memory also be used to regulate aggression? One clue comes from the fact that male mice develop a social hierarchy when housed together; a dominant alpha male sits atop this hierarchy, followed by a succession of increasingly submissive males. When a new mouse is introduced into a colony, there are bouts of fights between the stranger and the other mice until the social hierarchy is re-established.

“It appears that, at the beginning of a social interaction — such as when the resident mouse meets an intruder — the animal’s CA2 forms a social memory, a sort of social ID tag, of the other mouse,” Dr. Leroy continued. “Further along in the interaction between the two mice, a signal generated in CA2 is sent to the lateral septum, which facilitates aggressive behavior.”

A hormone called vasopressin may also be at work, says the research team. When released in the brain, vasopressin regulates a number of social behaviors, so the team asked whether vasopressin might help determine whether a mouse decides to attack.

As vasopressin levels are altered in people with schizophrenia and autism, the researchers hope to further explore whether and how such disorders are tied to CA2 dysfunction.

In 2016, Dr. Siegelbaum and fellow Zuckerman Institute Principal Investigator Joseph Gogos, MD, PhD, found that mice carrying a human mutation linked to schizophrenia have a dysfunctional CA2. This provided striking evidence that social memory deficits, a key feature of schizophrenia, may have their origins in CA2.

Having Strong Social Connections Can Improve Your Health

“People with schizophrenia exhibit a wide range of behavioral alterations, including impaired social memory and altered levels of aggression,” said Dr. Siegelbaum. “Might this result from a loss or change in CA2 activity? And could these deficits be alleviated by artificially boosting CA2 activity? That is something that our research, and that of others, hopes to reveal.”

Funding: This research was supported by the National Institutes of Health (R01 MH104602-01, R01-MH106629), the Portuguese Foundation for Science and Technology and the Howard Hughes Medical Institute.