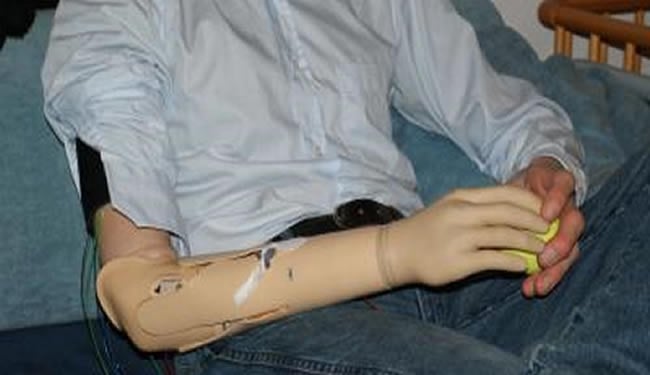 A prosthetic hand system has been created that allows the user’s brain to pick up sensory information from the prosthetic hand. This prosthetic hand system is also predicted to reduce phantom pains. Two people have tested out the new system with positive results with more testing ahead. This research should interest readers wanting to learn more about prosthetics, neurology, neuroscience, artificial intelligence and medicine.

Prosthesis with information at its fingertips

The pain of losing a body part is twofold, as the patients not only suffer from wound pain. Often they are also affected by so called phantom pain. Unlike bodily wounds which will eventually heal, phantom pain often lasts for years and sometimes a lifetime. “Phantom pain is very difficult to treat”, says Professor Dr Thomas Weiss from the Friedrich-Schiller-University Jena. “Mostly they prove to be highly therapy-resistant”, the Professor at the Department for Biological and Clinical Psychology says. In many cases the symptoms persist, in spite of high dosages of painkillers. This puts patients at a high risk of medication addiction, according to the pain research scientist.

But now scientists of the University of Jena give cause for hope to the affected patients. Together with the trauma surgeons of the Jena University Hospital, business partners and supported by the German Social Accident Insurance (Deutsche Gesetzliche Unfallversicherung, DGVU) Professor Weiss’s team modified conventional hand prostheses in order to reduce phantom pain after an underarm amputation.

A stimulation unit which is connected to the remaining part of the upper arm by a cuff plays a crucial part in the newly developed medical device. “There are pressure sensors between thumb and index finger as well as on the thumb of the hand prosthesis”, Professor Dr Dr Gunther Hofmann, Director of the Jena Department for Trauma, Hand and Reconstructive Surgery explains. Originally they were only meant to regulate the strength of grip of the artificial hand depending on what the patient wanted to pick up a raw egg or a hammer. “Our system is now able to transmit this sensory information from the hand to the upper arm”, says trauma surgeon Hofmann. “Thus the brain picks up the feedback from the prosthesis as if it was one’s own hand”, Professor Weiss adds, explaining the cause for phantom pain: The brain structures that were originally responsible for the stimulus processing of the arm are suddenly “out of work” after the loss of the limb. This induces a functional re-organization of these brain regions. “These areas take over the processing of sensory stimuli from other body parts, especially the arm stump and the face”, says the Jena psychologist. As a result, intensified and sometimes painful sensations occur – the phantom pain.

By means of the feedback between the artificial hand and the brain, provided by the Jena system, the re-organization of the brain is supposed to be prevented or to be reversed. “The first patients who have tested the system were very positive about it”, Professor Hofmann was delighted to report. It was important now to test the feedback system on as many patients as possible, he added.

“We would like to know if the transmission of sensory information from the hand is helpful to only a few people or if it is a therapeutic for all wearers of artificial limbs”, explains Professor Weiss.