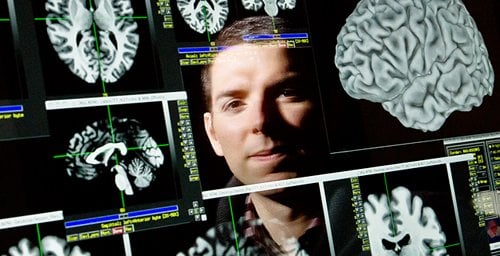 A new study of 152 Vietnam veterans with combat-related brain injuries offers the first detailed map of the brain regions that contribute to emotional intelligence; the ability to process emotional information and navigate the social world.

The study appears in the journal Social Cognitive & Affective Neuroscience.

“This was a remarkable group of patients to study, mainly because it allowed us to determine the degree to which damage to specific brain areas was related to impairment in specific aspects of general and emotional intelligence,” said study leader Aron K. Barbey, a professor of neuroscience, of psychology and of speech and hearing science at the Beckman Institute for Advanced Science and Technology at the University of Illinois.

A previous study led by Barbey mapped the neural basis of general intelligence by analyzing how specific brain injuries (in a larger sample of Vietnam veterans) impaired performance on tests of fundamental cognitive processes.

In both studies, researchers pooled data from CT scans of participants’ brains to produce a collective, three-dimensional map of the cerebral cortex. They divided this composite brain into 3-D units called voxels. They compared the cognitive abilities of patients with damage to a particular voxel or cluster of voxels with those of patients without injuries in those brain regions. This allowed the researchers to identify brain areas essential to specific cognitive abilities, and those that contribute significantly to general intelligence, emotional intelligence, or both.

They found that specific regions in the frontal cortex (behind the forehead) and parietal cortex (top of the brain near the back of the skull) were important to both general and emotional intelligence. The frontal cortex is known to be involved in regulating behavior. It also processes feelings of reward and plays a role in attention, planning and memory. The parietal cortex helps integrate sensory information, and contributes to bodily coordination and language processing.

“Historically, general intelligence has been thought to be distinct from social and emotional intelligence,” Barbey said. The most widely used measures of human intelligence focus on tasks such as verbal reasoning or the ability to remember and efficiently manipulate information, he said.

“Intelligence, to a large extent, does depend on basic cognitive abilities, like attention and perception and memory and language,” Barbey said. “But it also depends on interacting with other people. We’re fundamentally social beings and our understanding not only involves basic cognitive abilities but also involves productively applying those abilities to social situations so that we can navigate the social world and understand others.”

The new findings will help scientists and clinicians understand and respond to brain injuries in their patients, Barbey said, but the results also are of broader interest because they illustrate the interdependence of general and emotional intelligence in the healthy mind.

Notes about this cognitive neuroscience research

The study team also included Roberto Colom, of the Universidad Autónoma de Madrid, and Jordan Grafman, now at the Rehabilitation Institute of Chicago.