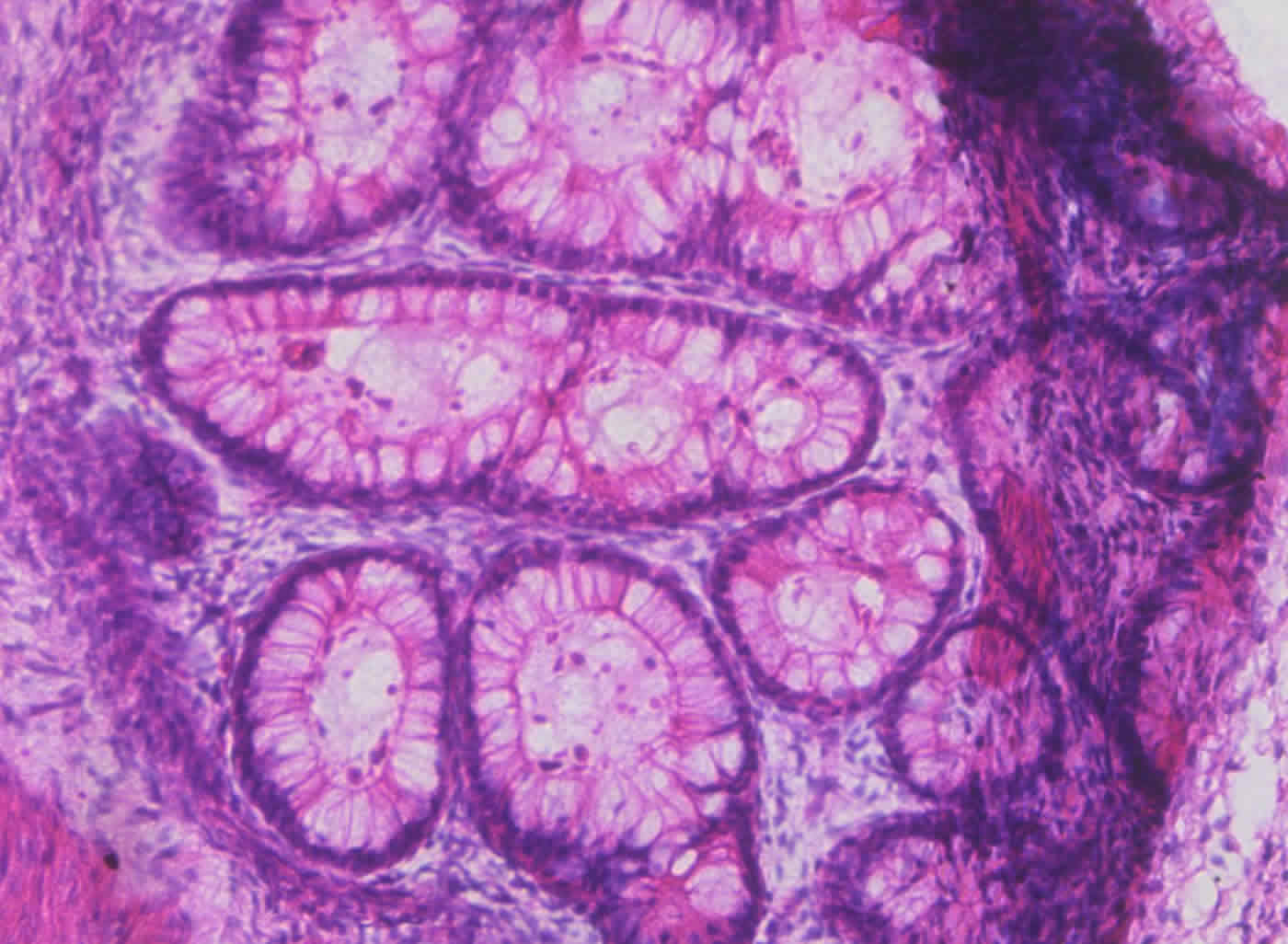 This microscopic image shows a cross section from a teratoma, generated in the lab by authors of a June 9 study in Stem Cell Reports that tested the quality of induced pluripotent stem cells (iPSCs). Teratomas, benign tumors containing the developing cells of different body parts, allowed researchers to see if the iPSCs could form the body's three basic germ cell lines - endoderm (gut region), ectoderm (epidermis, nerve tissue, etc.) and mesoderm (muscles, blood cells, etc.). This teratoma in this image includes an area with endoderm tissue. NeuroscienceNews.com image is credited to Cincinnati Children's.

Summary: A newly study reports on a comprehensive characterization of a large set of iPSCs.

Transformative technology not quite ready for clinical use.

As the promise of using regenerative stem cell therapies draws closer, a consortium of biomedical scientists reports about 30 percent of induced pluripotent stem cells they analyzed from 10 research institutions were genetically unstable and not safe for clinical use.

In a study published June 9 by the journal Stem Cell Reports, and funded by the National Heart, Lung, and Blood Institute, the multi-institutional research team reports on the comprehensive characterization of a large set of induced pluripotent stem cells (iPSCs). Specialized iPSCs are reprogrammed from adult skin or infant cord blood cells and can become any cell type in the body – a condition called pluripotency that mimics the function of human embryonic stem cells (hESCs).

Part of the Progenitor Cell Biology Consortium, the scientists are working to make sure this growing area of medical research is grounded in safe and sound science. Although the technology to produce safe and effective iPSCs exists, study authors report they encountered an unexpected number of wobbly production processes for the cells. This includes some cell lines contaminated with bacteria or carrying genes and mutations associated with cancer.

“It was very surprising to us the high number of unstable cell lines identified in the study, which highlights the importance of setting safety standards for stem cell therapies,” said Carolyn Lutzko, PhD, senior author and director of translational development in the Translational Core Laboratories at Cincinnati Children’s Hospital Medical Center. “A good number of the cell lines we studied met quality standards, although the unexpected number of lines that did not meet these standards could not be used for clinical therapies.”

The researchers also announced establishment of an on-line web portal and database hosted at https://www.synapse.org/. It gives scientists open access to data from the study to support their own research into potential iPSC-based stem cell therapies. This allows investigators to compare the quality and stability of iPSCs generated in their own labs to those from the current study.

The researchers compared 58 different lines of iPSCs submitted by the different institutions. The cells were generated with a variety of genes, methods and cells of origin, such as adult skin or infant cord blood cells. The iPSCs were evaluated for genetic stability, rate of pluripotency and several other scientific criteria.

Genetic stability is critical to the safety of iPSCs to avoid the risk of an experimental therapy triggering cancer or other medical problems. It also is vital that – prior to being instructed to become a specific cell type – iPSC lines continuously renew and expand in a blank slate form without the introduction of genetic errors.

Researchers also compared the molecular and functional characteristics of iPSCs to human embryonic stem cells, which are used sparingly as a gold standard for benchmarking quality.

How well the 58 iPSC lines met quality criteria depended on the origin of the reprogrammed cells (skin vs. blood, male vs. female) and specific reprogramming methods. The different methods included a variety of reprogramming genes, vectors (engineered viruses that deliver genetic material to cells), or the use of plasmids (small DNA molecules that can deliver reprogramming genes).

Being pluripotent means iPSCs can generate cells from each of the three basic germ cell lines that form the body – endoderm (gut region), ectoderm (epidermis, nerve tissue, etc.) and mesoderm (muscles, blood cells, etc.). Pluripotency can be tested to determine if iPSC lines are able to form what are called teratomas – benign tumors made up of different cell types (teeth, bone, brain, etc.).

It had been thought that poor quality iPSC lines could not be pluripotent, Lutzko said, although until the current study this theory had not been carefully tested because of the expense. This prompted Lutzko and her colleagues to check and see whether all iPSC lines – both high and low quality – could generate teratomas.

To do this the researchers injected laboratory mouse models with different iPSC lines to see if they formed the tumors, and secondly whether the tumors contained examples of cells from each of the three different germ cell types. Tests showed that both genetically stable and unstable iPSC lines formed teratomas with cells from all three germ layers.

Although genetically unstable iPSC lines demonstrated pluripotency, the concern in a clinical context would be that they also could result in cancer – again emphasizing the need for safe reprogramming methods, according to study authors.

Biology in a Computer

The study combined large-scale molecular testing and characterization in a laboratory setting with computational analyses led by study first author, Nathan Salomonis, PhD, a researcher in the Division of Biomedical Informatics at Cincinnati Children’s. Salomonis used computational approaches to examine and generate large sets of data on the interplay between different methods of cell programming, gene regulation and the functional quality of iPSCs.

These data revealed new and subtle telltale signs of iPSC lines that had already lost their ability to make all necessary adult cell types, Salomonis said. This massive collection of raw processed data has been made available through the online web portal and database.

As consortium researchers look forward, Salomonis said they will test how well different lines of iPSCs can transform into very specific cell types – such as brain, heart, lung and other cells in the human body. After data on these tests are verified and published, the consortium will also add this information to the online database as a public resource.

All of the current study’s laboratory tests and quality analyses were channeled through Cincinnati Children’s. The medical center served as both the study’s cell characterization core and bioinformatics core, said Lutzko, who also is an associate professor of pediatrics at the University of Cincinnati College of Medicine and division director of Regenerative Medicine and Cellular Therapies at Hoxworth Blood Center in Cincinnati.

Summary
The rigorous characterization of distinct induced pluripotent stem cells (iPSC) derived from multiple reprogramming technologies, somatic sources, and donors is required to understand potential sources of variability and downstream potential. To achieve this goal, the Progenitor Cell Biology Consortium performed comprehensive experimental and genomic analyses of 58 iPSC from ten laboratories generated using a variety of reprogramming genes, vectors, and cells. Associated global molecular characterization studies identified functionally informative correlations in gene expression, DNA methylation, and/or copy-number variation among key developmental and oncogenic regulators as a result of donor, sex, line stability, reprogramming technology, and cell of origin. Furthermore, X-chromosome inactivation in PSC produced highly correlated differences in teratoma-lineage staining and regulator expression upon differentiation. All experimental results, and raw, processed, and metadata from these analyses, including powerful tools, are interactively accessible from a new online portal at https://www.synapse.org to serve as a reusable resource for the stem cell community.