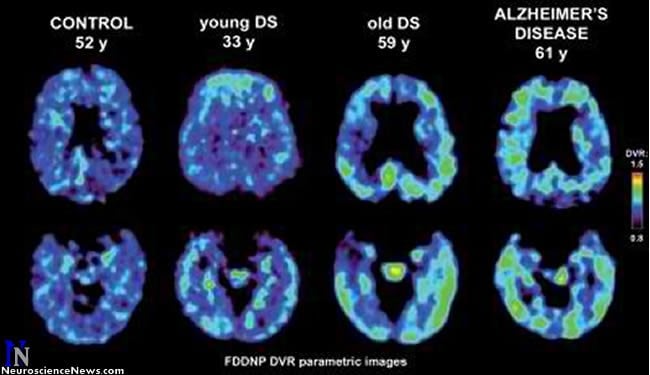 In one of the first studies of its kind, UCLA researchers used a unique brain scan to assess the levels of amyloid plaques and neurofibrillary tangles — the hallmarks of Alzheimer’s disease — in adults with Down syndrome.

Published in the June edition of the Archives of Neurology, the finding may offer an additional clinical tool to help diagnose dementia in adults with Down syndrome, a genetic disorder caused by the presence of a complete or partial extra copy of chromosome 21.

Adults with this disorder develop Alzheimer’s-like plaque and tangle deposits early, often before the age of 40. Previously, the only way to physically detect these abnormal proteins in this population was through an autopsy.

Over the last decade, methods for identifying and imaging the neuropathology of Alzheimer’s disease in living patients have been developed. UCLA researchers have created a chemical marker called FDDNP that binds to both plaque and tangle deposits, which can then be viewed through a positron emission tomography (PET) brain scan, providing a “window into the brain.” Using this method, researchers are able to pinpoint where in the brain these abnormal protein deposits are accumulating.

Due to individual variability and difficulty in obtaining baseline levels of cognitive function in adults with Down syndrome, such imaging may be useful in helping to diagnose dementia, say researchers.

“Neuroimaging may be a helpful tool in assessing and tracking plaque and tangle development over time in this population,” said the study’s senior author, Dr. Gary Small, a professor at the Semel Institute for Neuroscience and Human Behavior at UCLA who holds UCLA’s Parlow-Solomon Chair on Aging. “Early detection can also lead to earlier interventions and treatments, often before symptoms begin.”

Analysis found significantly higher binding levels of the chemical marker in participants with Down syndrome in all brain regions, when compared with healthy controls. Compared with Alzheimer’s disease patients, subjects with Down syndrome showed significantly higher binding levels in the parietal and frontal regions — areas involved in memory, behavior and reasoning.

“The higher level of plaques and tangles may be reflecting the early and extensive accumulation of these deposits seen in individuals with Down syndrome,” Small said.

The researchers also discovered significant associations between increased age in those with Down syndrome and higher FDDNP binding values in the parietal, lateral temporal and frontal regions.

“This is one of the first times we’ve been able to visualize the neuropathology occurring in the living brains of adults with Down syndrome,” said study author Dr. Jorge R. Barrio, a professor of molecular and medical pharmacology at the David Geffen School of Medicine at UCLA who holds UCLA’s Plott Chair in Gerontology. “The age-related patterns and regional distribution of the plaques and tangles were consistent with the types of deposits that could only be identified previously through an autopsy.”

While the FDDNP brain scans didn’t differentiate between the two types of abnormal proteins, the areas of accumulation were consistent with earlier autopsy study findings, which had shown that while plaque and tangle pathologies are the same in both Down syndrome and Alzheimer’s disease, the deposit patterns are different.

Autopsy studies have also shown that all adults with Down syndrome eventually develop these accumulations of amyloid plaques and tau tangles. But rather than experiencing memory decline and other cognitive losses, as is common with Alzheimer’s, aging Down syndrome patients tend to develop behavioral problems.

As part of the study, researchers performed cognitive and behavioral assessments of the Down syndrome subjects to see if FDDNP binding levels correlated with assessment results. They found several positive correlations with behavior abnormalities associated with these brain changes, including indifference and inappropriateness.

“We found that the behavioral changes in the subjects with Down syndrome correlated with neurological changes in related areas of the brain consistent with the level of FDDNP binding levels to the abnormal proteins,” Small said.

Small noted that cognitive skills in people with Down syndrome vary considerably and may not have been captured completely in the assessment, which primarily measured memory function. Larger future studies will compare other cognitive tests with FDDNP binding values, he said.

This study was supported by the National Institutes of Health and the U.S. Department of Energy.

UCLA owns three U.S. patents on the FDDNP chemical marker. The Office of Intellectual Property at UCLA is actively seeking a commercial partner to bring this promising technology to market.

Small, Barrio and study author S.C. Huang are among the inventors. Disclosures are listed in the full study.