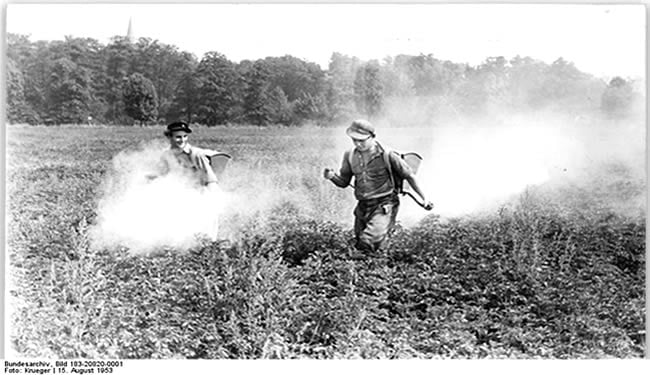 Scientists have found evidence linking pesticides to attention problems in children. Children exposed to higher levels of organophosphate pesticides when they were in their mother’s womb were more likely to have attention problems at 5 years of age. It is believed the organophosphate pesticides disrupt acetlycholine related functions in the nervous system. Attention, learning and memory are believed to rely heavily on acetylcholine.

Children who were exposed to organophosphate pesticides while still in their mother’s womb were more likely to develop attention disorders years later, according to a new study by researchers at the University of California, Berkeley.

The new findings, to be published Aug. 19 in the journal Environmental Health Perspectives (EHP), are the first to examine the influence of prenatal organophosphate exposure on the later development of attention problems. The researchers found that prenatal levels of organophosphate metabolites were significantly linked to attention problems at age 5, with the effects apparently stronger among boys.

“These studies provide a growing body of evidence that organophosphate pesticide exposure can impact human neurodevelopment, particularly among children,” said the study’s principal investigator, Brenda Eskenazi, UC Berkeley professor of epidemiology and of maternal and child health. “We were especially interested in prenatal exposure because that is the period when a baby’s nervous system is developing the most.”

The study follows more than 300 children participating in the Center for the Health Assessment of Mothers and Children of Salinas (CHAMACOS), a longitudinal study led by Eskenazi that examines environmental exposures and reproductive health. Because the mothers and children in the study are Mexican-Americans living in an agricultural community, their exposure to pesticides is likely higher and more chronic, on average, than that of the general U.S. population.

Yet, the researchers pointed out that the pesticides they examined are widely used, and that the results from this study are a red flag that warrants precautionary measures.

“It’s known that food is a significant source of pesticide exposure among the general population,” said Eskenazi. “I would recommend thoroughly washing fruits and vegetables before eating them, especially if you’re pregnant.”

“Given that these compounds are designed to attack the nervous system of organisms, there is reason to be cautious, especially in situations where exposure may coincide with critical periods of fetal and child development,” said study lead author Amy Marks, who was an analyst at UC Berkeley’s School of Public Health at the time of the study.

Many of these same UC Berkeley researchers are also finding that children with certain genetic traits may be at greater risk, a finding that is being published the same day in a separate EHP paper. That study found that 2-year-olds with lower levels of paraoxonase 1 (PON1), an enzyme that breaks down the toxic metabolites of organophosphate pesticides, had more neurodevelopmental delays than those with higher levels of the enzyme. The authors suggest that people with certain PON1 genotypes could be particularly vulnerable to pesticide exposure.

The researchers then evaluated the children at age 3.5 and 5 years for symptoms of attention disorders and ADHD using maternal reports of child behavior, performance on standardized computer tests, and behavior ratings from examiners. They controlled for potentially confounding factors such as birthweight, lead exposure and breastfeeding.

Each tenfold increase in prenatal pesticide metabolites was linked to having five times the odds of scoring high on the computerized tests at age 5, suggesting a greater likelihood of a child having clinical ADHD. The effect appeared to be stronger for boys than for girls.

While a positive link between prenatal pesticide exposure and attention problems was seen for 3.5-year-olds, it was not statistically significant, a finding that did not surprise the researchers.

“Symptoms of attention disorders are harder to recognize in toddlers, since kids at that age are not expected to sit down for significant lengths of time,” said Marks. “Diagnoses of ADHD often occur after a child enters school.”

The UC Berkeley researchers are continuing to follow the children in the CHAMACOS study as they get older, and expect to present more results in the years to come.

The findings add to the list of chemical assaults that have been linked to ADHD in recent years. In addition to pesticides, studies have found associations with exposure to lead and to phthalates, which are commonly used in toys and plastics.

“High levels of the symptoms of ADHD by age 5 are a major contributor to learning and achievement problems in school, accidental injuries at home and in the neighborhood, and a host of problems in peer relationships and other essential competencies,” said UC Berkeley psychology professor Stephen Hinshaw, one of the country’s leading experts on ADHD, who was not part of this study. “Finding preventable risk factors is therefore a major public health concern.”

About this neuroscience paper:

The authors of the PON1 paper include Nina Holland and Karen Huen at UC Berkeley’s Center for Children’s Environmental Health Research.