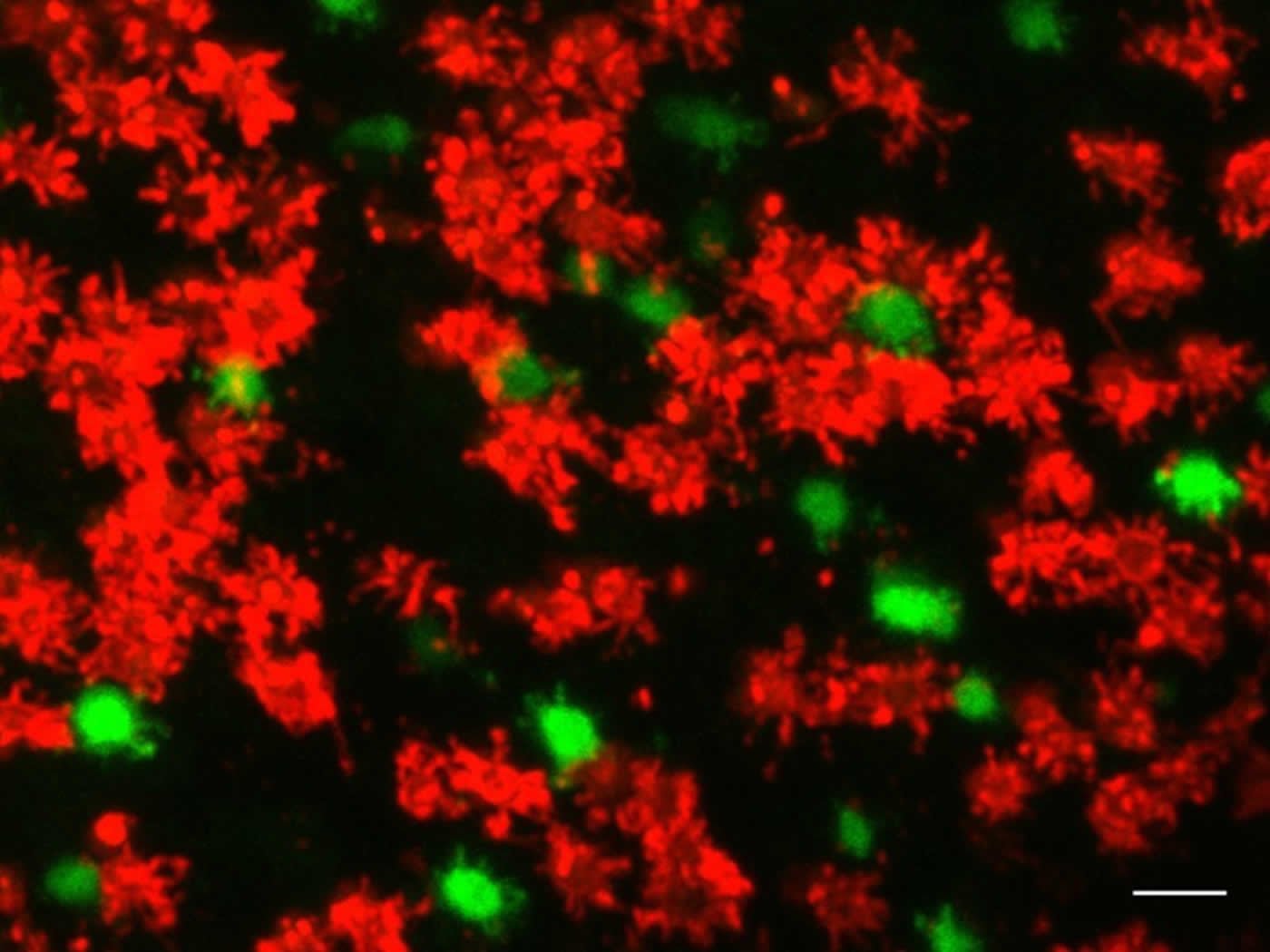 The green objects represent the type B cells - thus the neurons that are activated by low environmental oxygen. The red objects represent “canonical” or “conventional” olfactory sensory neurons: these cells each express one of the 1,100 odorant receptor genes in the genome, and respond to conventional odorous ligands. NeuroscienceNews.com image is credited to Max Planck Research Unit for Neurogenetics, Frankfurt am Main.

Mice can sense oxygen levels in the environment using specialized neurons in their noses that are present in the olfactory mucosa.

The genome of mice harbours more than 1000 odorant receptor genes, which enable them to smell myriad odours in their surroundings. Researchers at the Max Planck Research Unit for Neurogenetics in Frankfurt, the University of Saarland in Homburg, the University of Cambridge and the Karolinska Institute in Stockholm have discovered that mice can also sense the oxygen level of the inhaled air using neurons in their nose. For this newly discovered sensory property, mice rely on two genes termed Gucy1b2 and Trpc2, but apparently not on odorant receptor genes.

The research team discovered that a specific type of chemosensory neuron in the mouse olfactory mucosa responds to oxygen decreases in the environment. Chemosensory cells typically detect an increase in the concentration of a substance. In mammals, a lack of oxygen was thought to be detected primarily by the carotid body, a sensory organ situated at the carotid arteries in the neck. Activation of the carotid body results in activation of the respiratory centre in the brain. As mice live in burrows, it appears that during evolution an additional mechanism has developed in order to protect the individuals and their offspring from a shortage of oxygen.

The function of these so-called type B cells was enigmatic until this paper. “We activated these cells with low-oxygen air, and discovered a possibly vital function of these cells”, says Peter Mombaerts, director of the Max Planck Research Unit for Neurogenetics. The research team investigated how type B cells behave when exposed to various oxygen levels. Using a calcium-sensitive dye, they observed that type B cells in the olfactory mucosa are activated following a modest decrease of the oxygen level in the external environment.

The scientists found that the Gucyb12 and Trpc2 genes are essential for signal transduction in type B cells upon exposure to low oxygen. They used genetically altered mice in which either gene is inactivated genetically. These genes encode, respectively, an enzyme that produces the second messenger cGMP and an ion channel through which calcium enters the cells. (Calcium is also another important intracellular messenger.) Without functional Gucy1b2 and Trpc2 genes, calcium-dependent signalling pathways are not activated in type B cells, and mice cannot distinguish or respond properly to decreased oxygen levels. Thus far the molecular sensor that detects the low oxygen level remains unknown. The researchers are investigating further the signalling mechanisms that result in activation of these neurons.

The researchers speculate that type B cells have also a social influence in mice. For instance, mice build their nests preferably in locations with a higher oxygen level in order to protect their offspring. “The offspring needs sufficient oxygen, otherwise they would be underserved”, says Frank Zufall, director at the Center for Integrative Physiology and Molecular Medicine in Homburg.

Mice may be more sensitive to a lack of oxygen than humans. The human Gucy1b2 and Trpc2 genes are pseudogenes, which means that these genes may not encode proteins. It remains to be determined if type B cells occur in humans at all and if so, whether they detect low oxygen levels.

Imaging the Brain With Ultrasound Waves

Summary
Sensing the level of oxygen in the external and internal environments is essential for survival. Organisms have evolved multiple mechanisms to sense oxygen. No function in oxygen sensing has been attributed to any mammalian olfactory system. Here, we demonstrate that low environmental oxygen directly activates a subpopulation of sensory neurons in the mouse main olfactory epithelium. These neurons express the soluble guanylate cyclase Gucy1b2 and the cation channel Trpc2. Low oxygen induces calcium influx in these neurons, and Gucy1b2 and Trpc2 are required for these responses. In vivo exposure of a mouse to low environmental oxygen causes Gucy1b2-dependent activation of olfactory bulb neurons in the vicinity of the glomeruli formed by axons of Gucy1b2+ sensory neurons. Low environmental oxygen also induces conditioned place aversion, for which Gucy1b2 and Trpc2 are required. We propose that this chemosensory function enables a mouse to rapidly assess the oxygen level in the external environment.