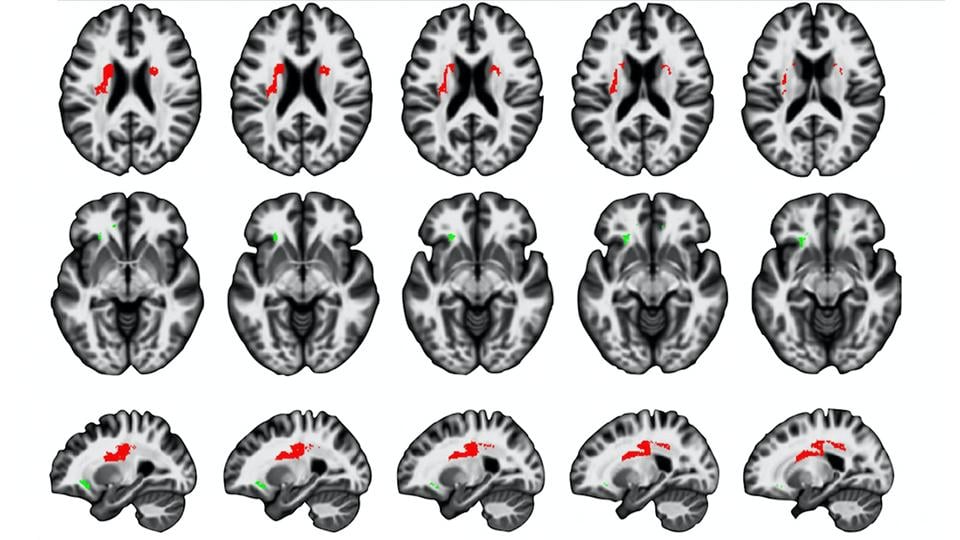 Summary: New patterns of brain ageing across the human lifespan have been revealed by researchers analysing microstructural changes in the brain’s white matter.

Dr Marinella Cappelletti from Goldsmiths, University of London, University of Oxford’s Dr Vyacheslav Karolis, and colleagues, mapped and analysed myelin content in the brains of almost 100 healthy adults aged 20 to 74.

A report on their research is published in the journal Neurobiology of Ageing.

Myelin is a substance that wraps around nerve fibres, increasing the speed of electrical communication between neurons. Its light colour gives a name to the brain tissue known as white matter – a collection of fibres which connects distant brain areas. Myelin loss, through normal ageing or through disease, typically causes neurological dysfunction.

Using magnetisation transfer concentration (a brain imaging marker sensitive to myelin content), the research team mapped myelin content across the brain in people of different ages and demonstrated that healthy ageing is not a steady, or uniform, process.

Dr Karolis, Dr Cappelletti and colleagues first confirmed that at the front of the brain, areas of white matter are most affected by ageing. This reinforces the evidence known for some time that anterior areas of the brain, which typically develop later, are more susceptible to ageing decline relative to posterior areas.

Dr Karolis et al have also identified a new pattern of brain ageing which shows that regions of the brain’s white matter that are more lateral (toward the side) start declining from about the mid-40s, although the decline is relatively slow.

In contrast, white matter in the ventral, or deeper, areas of the brain showed relatively stable myelin levels until around the late-50s, at which point age-related changes appear, and decline continues quite rapidly. The researchers have termed this pattern the lateral-to-ventral gradient of ageing.

They also found a moderate ageing effect in the temporal lobe, an area of the brain often associated with neurodegeneration (the loss of structure or function in neurons); this suggests that brain regions which show myelin loss in healthy ageing are different from those showing pathological changes.

Dr Cappelletti said: “The study provides a closer link between developmental and ageing processes. The ventral-to-lateral sequence has previously been observed in the process of myelin development with myelination progressing from deep to lateral areas. Here we show a clear reversal of this pattern in ageing, and provide benchmark data which may help to distinguish between healthy and pathological ageing, and also highlight the importance of looking at ageing from mid-life.”

Spatial gradients of healthy ageing: a study of myelin-sensitive maps

Highlights
• We studied spatial gradients of white matter ageing in myelin-sensitive MT maps
• We found evidence for two gradients: anterior-to-posterior and lateral-to-ventral
• In the lateral white matter maturation continues up to the age of 45
• These late-maturing white matter regions show an early but gradual MT decrease
• Instead, early-maturing ventral regions show a rapid MT decrease at a later age

Protracted development of a brain network may entail greater susceptibility to ageing decline, supported by evidence of an earlier onset of age-related changes in late-maturing anterior areas, i.e. an anterior-to-posterior gradient of brain ageing. Here we analysed the spatio-temporal features of age-related differences in myelin content across the human brain indexed by magnetisation transfer (MT) concentration in a cross-sectional cohort of healthy adults. We described age-related spatial gradients in MT, which may reflect the reversal of patterns observed in development. We confirmed an anterior-to-posterior gradient of age-related MT decrease, and also showed a lateral-to-ventral gradient inversely mirroring the sequence of connectivity development and myelination. MT concentration in the lateral white matter regions continued to increase up to the age of 45, and decreased moderately following a peak. In contrast, ventral white matter regions reflected life-long stable MT concentration levels, followed by a rapid decrease at a later age. We discussed our findings in relation with existing theories of brain ageing, including the lack of support for the proposal that areas which mature later decline at an accelerated rate.