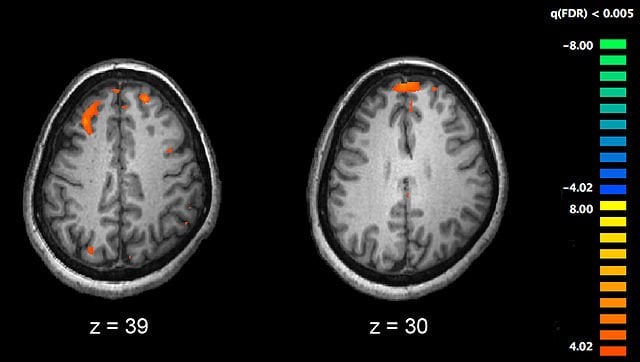 Columbia University Medical Center (CUMC) researchers have identified dozens of new spontaneous genetic mutations that play a significant role in the development of schizophrenia, adding to the growing list of genetic variants that can contribute to the disease. The study, the largest and most comprehensive of its kind, was published today in the online edition of the journal Nature Genetics.

Although schizophrenia typically onsets during adolescence and early adulthood, many of the mutations were found to affect genes with higher expression during early-to-mid fetal development. Together, the findings show that both the function of the mutated gene and when the gene is expressed are critically important in determining the risk for schizophrenia.

The findings inform epidemiologic studies showing that environmental factors, such as malnutrition or infections during pregnancy, can contribute to the development of schizophrenia. “Our findings provide a mechanism that could explain how prenatal environmental insults during the first and second trimester of pregnancy increase one’s risk for schizophrenia,” said study leader Maria Karayiorgou, MD, professor of psychiatry at CUMC, and acting chief, division of Psychiatric and Medical Genetics, New York State Psychiatric Institute. “Patients with these mutations were much more likely to have had behavioral abnormalities, such as phobias and anxiety in childhood, as well as worse disease outcome.”

In an earlier study of 53 families, the team of investigators found that spontaneous, or de novo, mutations — genetic errors that are present in patients but not in their parents — play a role in a substantial portion of sporadic cases of schizophrenia. The mutations were found in the part of the genome that codes for proteins, known as the exome.

In the larger, current study, the researchers performed whole-exome sequencing on 231 patient “trios” from the United States and South Africa. Each trio consisted of a patient and both of his or her parents, who were unaffected by the disease. By comparing the exomes of the patients with those of their parents, the researchers were able to identify de novo rather than heritable, mutations that may contribute to schizophrenia. This is the first study of this scale to search for single nucleotide variations in the exomes of schizophrenia patients. Previous studies from the Columbia group and others searched for much larger genetic variations, such as gene deletions or duplications.

The researchers identified many mutated genes with diverse functions. They also identified four new genes (LAMA2, DPYD, TRRAP, and VPS39) affected by recurrent de novo events within or across the two populations, a finding unlikely to have occurred by chance.

The researchers estimate that several hundred loci (genetic locations) can contribute to the development of schizophrenia. “The chance that two patients have exactly the same mutation or combination of mutations is rather small” said Dr. Karayiorgou. “What is intriguing is that despite this variability, people with schizophrenia tend to have, more or less, the same phenotype—that is, the same clinical presentation. Our hypothesis is that many neural circuits are extremely important in schizophrenia and that these circuits are vulnerable to a number of influences. So, when any of the genes involved in these circuits are mutated, the end result is the same.”

According to the researchers, the challenge remains to identify the affected biological processes and neural circuits, and to determine how they are affected.

“Although the genetics of schizophrenia are extremely complex, a coherent picture of the disease is beginning to emerge,” said co-director of the study Dr. Joseph Gogos, MD, PhD, and associate professor of physiology and neuroscience at Columbia University Medical Center. “Our studies show that dozens, and perhaps hundreds, of different spontaneous mutations can raise one’s risk for schizophrenia. On the surface, this is daunting, but using these new findings to understand how these mutations affect the same neural circuits, including during early fetal development, raises hopes that it may be possible to develop effective prevention and treatment strategies for the disease.”

Contrary to popular belief, schizophrenia is not a split personality; it is a chronic, severe, and disabling brain disorder that affects just over one percent of the adult population and is characterized by loss of contact with reality (psychosis), hallucinations (usually, hearing voices), firmly held false beliefs (delusions), abnormal thinking, a restricted range of emotions (flattened affect) or inappropriate and disorganized behavior, social withdrawal, and diminished motivation.

The disease often strikes in the early adult years, and although many individuals experience some recovery, many others experience substantial and lifelong disability. People with schizophrenia often have problems functioning in society and in relationships and are over-represented on disability rolls and among the homeless and imprisoned.

The precise causes of schizophrenia are not known, but current research suggests a combination of hereditary and environmental factors. Fundamentally, however, it is a biologic problem (involving changes in the brain), not one caused by poor parenting or a mentally unhealthy environment.

Since the causes of schizophrenia are not clear, treatments focus on eliminating disease symptoms. Treatments include antipsychotic medications and various psychosocial treatments.

Notes about this Schizophrenia research

The research was partially supported by National Institute of Mental Health grants MH061399 and MH077235 and the Lieber Center for Schizophrenia Research at Columbia University.

The authors declare no financial conflict of interest.