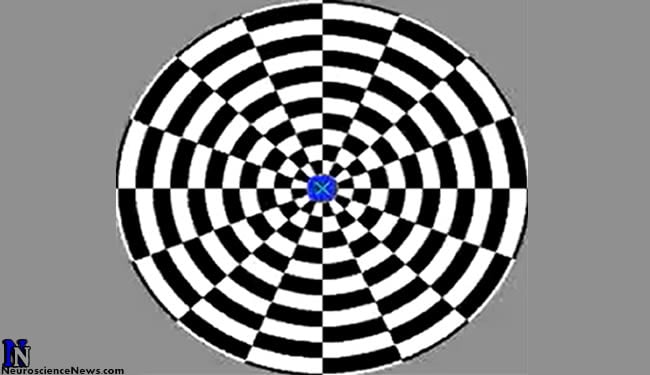 The yellow jacket (Rocky, the mascot of the University of Rochester) appears to be expanding. But he is not. He is staying still. We simply think he is growing because our brains have adapted to the inward motion of the background and that has become our new status quo. Similar situations arise constantly in our day-to-day lives – jump off a moving treadmill and everything around you seems to be in motion for a moment.

This age-old illusion, first documented by Aristotle, is called the Motion Aftereffect by today’s scientists. Why does it happen, though? Is it because we are consciously aware that the background is moving in one direction, causing our brains to shift their frame of reference so that we can ignore this motion? Or is it an automatic, subconscious response?

Davis Glasser, a doctoral student in the University of Rochester’s Department of Brain and Cognitive Sciences thinks he has found the answer. The results of a study done by Glasser, along with his advisor, Professor Duje Tadin, and colleagues James Tsui and Christopher Pack of the Montreal Neurological Institute, will be published this week in the journal Proceedings of the National Academy of Sciences (PNAS).

In their paper, the scientists show that humans experience the Motion Aftereffect even if the motion that they see in the background is so brief that they can’t even tell whether it is heading to the right or the left.

Even when shown a video of a backdrop that is moving for only 1/40 of a second (25 milliseconds) – so short that the direction it is moving cannot be consciously distinguished – a subject’s brain automatically adjusts. If the subject is then shown a stationary object, it will appear to him as though it is moving in the opposite direction of the background motion. In recordings from a motion center in the brain called cortical area MT, the researchers found neurons that, following a brief exposure to motion, respond to stationary objects as if they are actually moving. It is these neurons that the researchers think are responsible for the illusory motion of stationary objects that people see during the Motion Aftereffect.

This discovery reveals that the Motion Aftereffect illusion is not just a compelling visual oddity: It is caused by neural processes that happen essentially every time we see moving objects. The next phase of the group’s study will attempt to find out whether this rapid motion adaptation serves a beneficial purpose – in other words, does this rapid adaptation actually improve your ability to estimate the speed and direction of relevant moving objects, such as a baseball flying toward you.