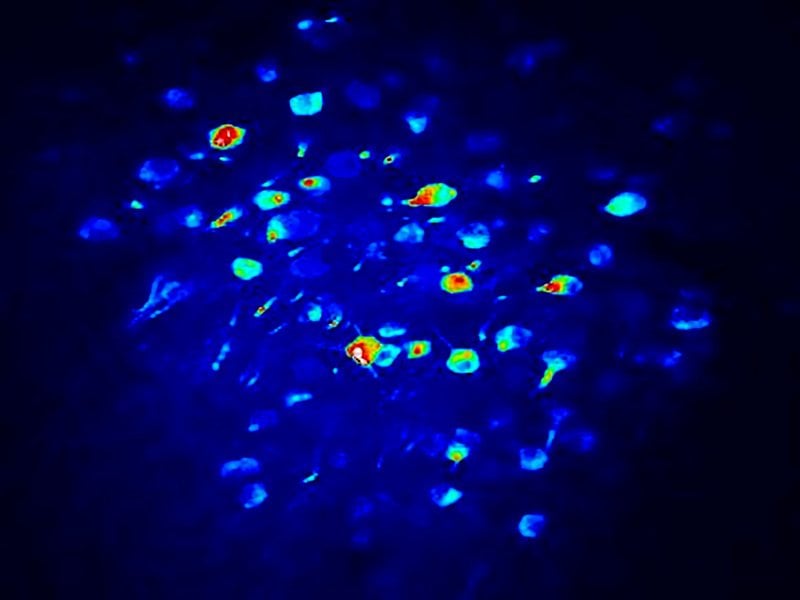 When Neurons Have Less to Say, They Say it With Particular Emphasis

Neurons strengthen their synapses in order to remain active after loss of input.

The brain is an extremely adaptable organ – but it is also very conservative according to scientists from the Max Planck Institute of Neurobiology in Martinsried in collaboration with colleagues from the Friedrich Miescher Institute in Basel and the Ruhr Institute Bochum. The researchers succeeded in demonstrating that neurons in the brain regulate their own excitability so that the activity level in the network remains as constant as possible. Even in the event of major changes, for example the complete absence of information from a sensory organ, the almost silenced neurons re-establish levels of activity similar to their previous ones after only 48 hours. The mean activity level thus achieved is a basic prerequisite for a healthy brain and the formation of new connections between neurons – an essential capacity for regeneration following injury to the brain or a sensory organ, for example.

Neurons communicate using electrical signals. They transmit these signals to neighbouring cells via special contact points known as the synapses. When a new item of information presents for processing, the cells can develop new synaptic contacts with their neighbouring cells or strengthen existing ones. To enable forgetting, these processes are also reversible. The brain is consequently in a constant state of reorganisation, through which individual neurons are prevented from becoming either too active or too inactive. The aim is to keep the level of activity constant, as the long-term overexcitement of neurons can result in damage to the brain.

Too little activity is not good either. “The cells can only re-establish connections with their neighbours when they are ‘awake’, so to speak, that is when they display a minimum level of activity,” explains Mark Hübener, head of the recently published study. The international team of researchers succeeded in demonstrating for the first time that the brain itself compensates for massive changes in neuronal activity within a period of two days, and can return to a similar level of activity to that before the change.

Up to now, the only indication of this astonishing capacity of the brain came from cell cultures. It was also unclear as to how neurons could control their own excitability in relation to the activity of the entire network. Now, the scientists have made significant progress towards finding an answer to this question. In their study, they examined the visual cortex of mice that recently went blind. As expected, but never previously demonstrated, the activity of the neurons in this area of the brain did not fall to zero but to half of the original value.

“That alone was an astonishing finding, as it shows the extent to which the visual cortex also processes information from other areas of the brain,” explains Tobias Bonhoeffer, who has been researching processes in the visual cortex at his department in the Max Planck Institute of Neurobiology for many years. “However, things really became exciting when we observed the area further over the following hours and days.”

The scientists were able, under the microscope, to witness “live” how the neurons in the visual cortex became active again. After just a few hours, they could clearly observe how the points of contact between the affected cells and neighbouring cells increased in size. When synapses get bigger, they also become stronger and signals are transmitted faster and more effectively. As a result of this intensification of the contact between the neurons, the activity of the affected network returned to its starting value after a period of between 24 and 48 hours. “To put it simply, due to the absence of visual input, the cells had less to say – but when they did say something, they said it with particular emphasis,” explains Mark Hübener.

Due to the simultaneous strengthening of all of the synapses of the affected neurons, major reductions in the neuronal activity can be normalised again with surprising speed. The relatively stable activity level thereby achieved is an essential prerequisite for maintaining a healthy, adaptable brain.