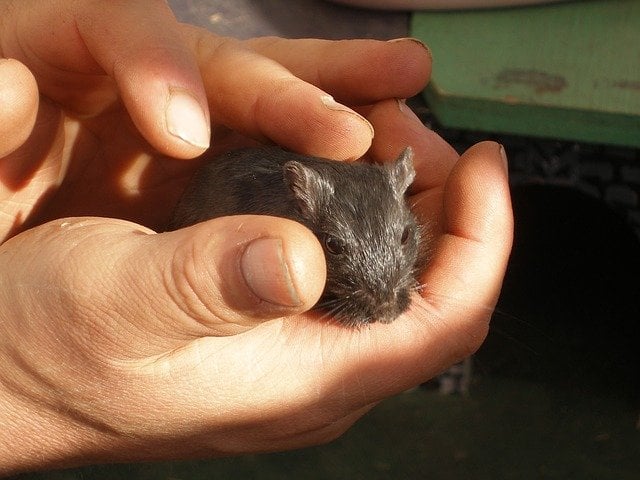 Researchers compared mice without MAO A/B with the 'wild type' litter mates. They discovered significant differences in how the knockout mice processed fear and other types of learning. This image shows a person holding a mouse.
Home
Featured

A little bit of learned fear is a good thing, keeping us from making risky, stupid decisions or falling over and over again into the same trap. But new research from neuroscientists and molecular biologists at USC shows that a missing brain protein may be the culprit in cases of severe over-worry, where the fear perseveres even when there’s nothing of which to be afraid.

In a study appearing the week of July 15 in the Proceedings of the National Academy of Sciences, the researchers examined mice without the enzymes monoamine oxidase A and B (MAO A/B), which sit next to each other in a human’s genetic code as well as on that of mice. Prior research has found an association between deficiencies of these enzymes in humans and developmental disabilities along the autism spectrum, such as clinical perseverance, the inability to change or modulate actions along with social context.

“These mice may serve as an interesting model to develop interventions to these neuropsychiatric disorders,” said University Professor and senior author Jean Shih, Boyd & Elsie Welin Professor of Pharmacology and Pharmaceutical Sciences at the USC School of Pharmacy and the Keck School of Medicine of USC. “The severity of the changes in the MAO A/B knockout mice compared to MAO A knockout mice supports the idea that the severity of autistic-like features may be correlated to the amounts of monoamine levels, particularly at early developmental stages.”

Shih is a world leader in understanding the neurobiological and biochemical mechanisms behind such behaviors as aggression and anxiety. In this latest study, Shih and her co-investigators — including lead author Chanpreet Singh, a USC doctoral student at the time of the research who is now at the California Institute of Technology (Caltech), and Richard Thompson, USC University Professor Emeritus and Keck Professor of Psychology and Biological Sciences at the USC Dornsife College of Letters, Arts and Sciences — expanded their past research on MAO A/B, which regulates neurotransmitters known as monoamines, including serotonin, norepinephrine and dopamine.

Comparing mice without MAO A/B with their wild-type littermates, the researchers found significant differences in how the mice without MAO A/B processed fear and other types of learning. Mice without MAO A/B and wild mice were put in a new, neutral environment and given a mild electric shock. All mice showed learned fear the next time they were tested in the same environment, with the MAO A/B knockout mice displaying a greater degree of fear.

But while wild mice continued to explore other new environments freely after the trauma, mice without the MAO A/B enzymes generalized their phobia to other contexts — their fear spilled over onto places where they should have no reason to be afraid.

“The neural substrates processing fear in the brain is very different in these mice,” Singh said. “Enhanced learning in the wrong context is a disorder and is exemplified by these mice. Their brain is not letting them forget. In a survival issue, you need to be able to forget things.”

The mice without MAO A and MAO B also learned eye-blink conditioning much more quickly than wild mice, which has also been noted in autistic patients but not in mice missing only one of these enzymes.

Importantly, the mice without MAO A/B did not display any differences in learning for spatial skills and object recognition, the researchers found, “but in their ability to learn an emotional event, the [MAO A/B knockout mice] are very different than wild types,” Singh said.

He continued: “When both enzymes are missing, it significantly increases the levels of neurotransmitters, which causes developmental changes, which leads to differential expression of receptors that are very important for synaptic plasticity — a measure of learning — and to behavior that is quite similar to what we see along the autism spectrum.”