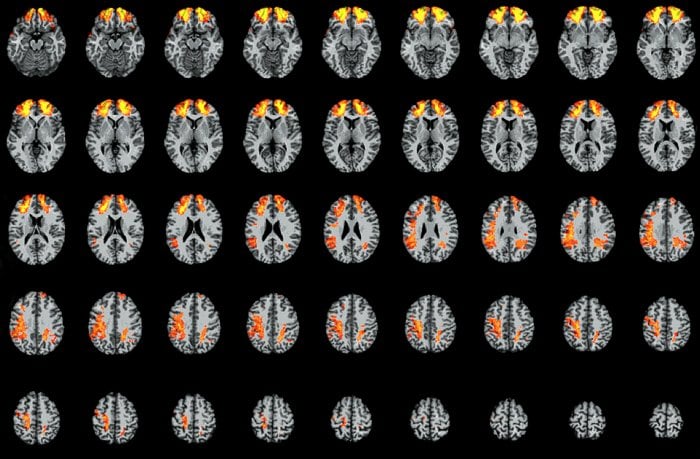 Researchers compared the discourse comprehension abilities of patients with damage to specific brain regions relative to patients without damage to those regions. Each image here represents one slice of the brain and the highlighted areas are those that are important for discourse comprehension. Credit Aron Barbey/University of Illinois.
Home
Featured

When reading text or listening to someone speak, we construct rich mental models that allow us to draw conclusions about other people, objects, actions, events, mental states and contexts. This ability to understand written or spoken language, called “discourse comprehension,” is a hallmark of the human mind and central to everyday social life. In a new study, researchers uncovered the brain mechanisms that underlie discourse comprehension.

The study appears in Brain: A Journal of Neurology.

With his team, study leader Aron Barbey, a professor of neuroscience, of psychology, and of speech and hearing science at the University of Illinois, previously had mapped general intelligence, emotional intelligence and a host of other high-level cognitive functions. Barbey is the director of the Decision Neuroscience Laboratory at the Beckman Institute for Advanced Science and Technology at Illinois.

To investigate the brain regions that underlie discourse comprehension, the researchers studied a group of 145 American male Vietnam War veterans who sustained penetrating head injuries during combat. Barbey said these shrapnel-induced injuries typically produced focal brain damage, unlike injuries caused by stroke or other neurological disorders that affect multiple regions. These focal injuries allowed the researchers to pinpoint the structures that are critically important to discourse comprehension.

A technique called voxel-based lesion-symptom mapping allowed the team to pool data from the veterans’ CT scans to create a collective, three-dimensional map of the cerebral cortex. They divided this composite brain into units called voxels (the three-dimensional counterparts of two-dimensional pixels). This allowed them to compare the discourse comprehension abilities of patients with damage to a particular voxel or cluster of voxels with those of patients without injuries to those brain regions.

The researchers identified a network of brain areas in the frontal and parietal cortex that are essential to discourse comprehension.

“Rather than engaging brain regions that are classically involved in language processing, our results indicate that discourse comprehension depends on an executive control network that helps integrate incoming language with prior knowledge and experience,” Barbey said. Executive control, also known as executive function, refers to the ability to plan, organize and regulate one’s behavior.cogn

“The findings help us understand the neural foundations of discourse comprehension, and suggest that core elements of discourse processing emerge from a network of brain regions that support language processing and executive functions. The findings offer new insights into basic questions about the nature of discourse comprehension,” Barbey said, “and could offer new targets for clinical interventions to help patients with cognitive-communication disorders.

“Discourse comprehension is a hallmark of human social behavior,” Barbey said. “By studying the mechanisms that underlie these abilities, we’re able to advance our understanding of the remarkable cognitive and neural architecture from which language comprehension emerges.”

Notes about this neuroscience and language research