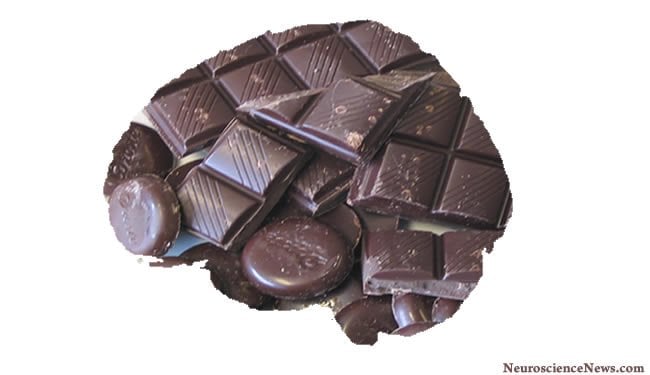 Pleasure Response From Chocolate: You Can See it in the Eyes

The brain’s pleasure response to tasting food can be measured through the eyes using a common, low-cost ophthalmological tool, according to a study just published in the journal Obesity. If validated, this method could be useful for research and clinical applications in food addiction and obesity prevention.

Dr. Jennifer Nasser, an associate professor in the department of Nutrition Sciences in Drexel University’s College of Nursing and Health Professions, led the study testing the use of electroretinography (ERG) to indicate increases in the neurotransmitter dopamine in the retina.

Dopamine is associated with a variety of pleasure-related effects in the brain, including the expectation of reward. In the eye’s retina, dopamine is released when the optical nerve activates in response to light exposure.

Nasser and her colleagues found that electrical signals in the retina spiked high in response to a flash of light when a food stimulus (a small piece of chocolate brownie) was placed in participants’ mouths. The increase was as great as that seen when participants had received the stimulant drug methylphenidate to induce a strong dopamine response. These responses in the presence of food and drug stimuli were each significantly greater than the response to light when participants ingested a control substance, water.

This study was a small-scale demonstration of the concept, with only nine participants. Most participants were overweight but none had eating disorders. All fasted for four hours before testing with the food stimulus.

If this technique is validated through additional and larger studies, Nasser said she and other researchers can use ERG for studies of food addiction and food science.

“My research takes a pharmacology approach to the brain’s response to food,” Nasser said. “Food is both a nutrient delivery system and a pleasure delivery system, and a ‘side effect’ is excess calories. I want to maximize the pleasure and nutritional value of food but minimize the side effects. We need more user-friendly tools to do that.”

The low cost and ease of performing electroretinography make it an appealing method, according to Nasser. The Medicare reimbursement cost for clinical use of ERG is about $150 per session, and each session generates 200 scans in just two minutes. Procedures to measure dopamine responses directly from the brain are more expensive and invasive. For example, PET scanning costs about $2,000 per session and takes more than an hour to generate a scan.

Notes about this food addiction and neuroscience research