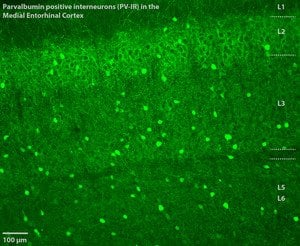 A microscopic view of the entorhinal cortex. The bright spots are the bodies of neurons. Credited to DZNE/Charité – Universitätsmedizin Berlin, Beed/Schmitz
Home
Featured

Researchers Gain New Insights into the Workings of the Brain

Scientists of the Charité Universitätsmedizin Berlin and the German Center for Neurodegenerative Diseases (DZNE) have managed to acquire new insights into the functioning of a region in the brain that normally is involved in spatial orientation, but is damaged by the Alzheimer’s disease. They investigated how nerve signals are suppressed inside the so-called entorhinal cortex. According to the researchers, this neuronal inhibition leads nerve cells to synchronize their activity.

The results of this study are now published in Neuron.

The entorhinal cortex is a link between the brain’s memory centre, the hippocampus, and the other areas of the brain. It is, however, more than an interface that only transfers nervous impulses. The entorhinal cortex also has an independent role in learning and thinking processes. This is particularly applicable for spatial navigation. “We know precious little about how this happens,” says Prof. Dietmar Schmitz, a researcher at the Cluster of Excellence NeuroCure at the Charité – Universitätsmedizin Berlin and Site Speaker for the DZNE in Berlin. “This is why we are investigating in animal models how the nerve cells within the entorhinal cortex are connected with each other.“

Signals wander inside the brain as electrical impulses from nerve cell to nerve cell. In general, signals are not merely forwarded. Rather, operation of the brain critically depends on the fact that the nerve impulses in some situations are activated and in other cases suppressed. A correct balance between suppression and excitation is decisive for all brain processes. “Until now research has mainly concentrated on signal excitation within the entorhinal cortex. This is why we looked into inhibition and detected a gradient inside the entorhinal cortex,” explains Dr. Prateep Beed, lead author of the study. “This means that nerve signals are not suppressed equally. The blockage of the nerve signals is weaker in certain parts of the entorhinal cortex and stronger in others. The inhibition has, so to speak, a spatial profile.”

When the brain is busy, nerve cells often coordinate their operation. In an electroencephalogram (EEG) – a recording of the brain’s electrical activity – the synchronous rhythm of the nerve cells manifests as a periodic pattern. “It is a moot question as to how nerve cells synchronize their behavior and how they bring about such rhythms,” says Beed. As he explains, it is also unclear whether these oscillations are only just a side effect or whether they trigger other phenomena. “But it has been demonstrated that neuronal oscillations accompany learning processes and even happen during sleep. They are a typical feature of the brain’s activity,” describes the scientist. “In our opinion, the inhibitory gradient, which we detected, plays an important role in creating the synchronous rhythm of the nerve cells and the related oscillations.”

In the case of Alzheimer’s, the entorhinal cortex is among the regions of the brain that are the first to be affected. “In recent times, studies related to this brain structure have increased. Here, already in the early stages of Alzheimer’s, one finds the protein deposits that are typical of this disease,” explains Schmitz, who headed the research. “It is also known that patients affected by Alzheimer’s have a striking EEG. Our studies help us to understand how the nerve cells in the entorhinal cortex operate and how electrical activities might get interrupted in this area of the brain.”

Notes about this neuroscience and neurodegenerative disease research