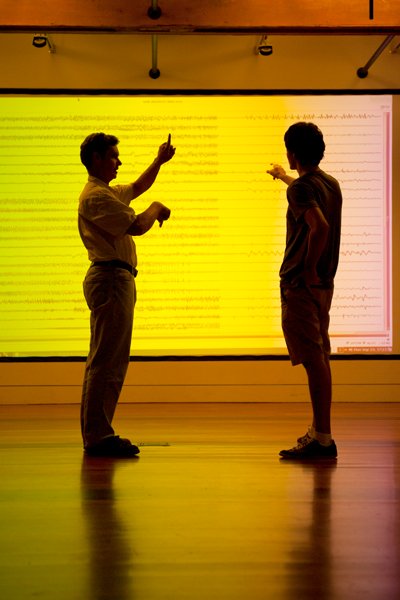 Scientists Build a ‘Brain Stethoscope’ to Turn Seizures into Music

When Chris Chafe and Josef Parvizi began transforming recordings of brain activity into music, they did so with artistic aspirations. The professors soon realized, though, that the work could lead to a powerful biofeedback tool for identifying brain patterns associated with seizures.

Josef Parvizi was enjoying a performance by the Kronos Quartet when the idea struck. The musical troupe was midway through a piece in which the melodies were based on radio signals from outer space, and Parvizi, a neurologist at Stanford Medical Center, began wondering what the brain’s electrical activity might sound like set to music.

He didn’t have to look far for help. Chris Chafe, a professor of music research at Stanford, is one of the world’s foremost experts in “musification,” the process of converting natural signals into music. One of his previous works involved measuring the changing carbon dioxide levels near ripening tomatoes and converting those changing levels into electronic performances.

Parvizi, an associate professor, specializes in treating patients suffering from intractable seizures. To locate the source of a seizure, he places electrodes in patients’ brains to create electroencephalogram (EEG) recordings of both normal brain activity and a seizure state.

He shared a consenting patient’s EEG data with Chafe, who began setting the electrical spikes of the rapidly firing neurons to music. Chafe used a tone close to a human’s voice, in hopes of giving the listener an empathetic and intuitive understanding of the neural activity.

Upon a first listen, the duo realized they had done more than create an interesting piece of music (see the YouTube video below for the audio clip).

“My initial interest was an artistic one at heart, but, surprisingly, we could instantly differentiate seizure activity from non-seizure states with just our ears,” Chafe said. “It was like turning a radio dial from a static-filled station to a clear one.”

If they could achieve the same result with real-time brain activity data, they might be able to develop a tool to allow caregivers for people with epilepsy to quickly listen to the patient’s brain waves to hear whether an undetected seizure might be occurring.

Parvizi and Chafe dubbed the device a “brain stethoscope.”

The sound of a seizure

The EEGs Parvizi conducts register brain activity from more than 100 electrodes placed inside the brain; Chafe selects certain electrode/neuron pairings and allows them to modulate notes sung by a female singer. As the electrode captures increased activity, it changes the pitch and inflection of the singer’s voice.

Before the seizure begins – during the so-called pre-ictal stage – the peeps and pops from each “singer” almost synchronize and fall into a clear rhythm, as if they’re following a conductor, Chafe said.

In the moments leading up to the seizure event, though, each of the singers begins to improvise. The notes become progressively louder and more scattered, as the full seizure event occurs (the ictal state). The way Chafe has orchestrated his singers, one can hear the electrical storm originate on one side of the brain and eventually cross over into the other hemisphere, creating a sort of sing-off between the two sides of the brain.

After about 30 seconds of full-on chaos, the singers begin to calm, trailing off into their post-ictal rhythm. Occasionally, one or two will pipe up erratically, but on the whole, the choir sounds extremely fatigued.

It’s the perfect representation of the three phases of a seizure event, Parvizi said.

Caring for a person with seizures can be very difficult, as not all seizure activity manifests itself with behavioral cues. It’s often impossible to know whether a person with epilepsy is acting confused because they are having a seizure, or if they are experiencing the type of confusion that is a marker of the post-ictal seizure phase.

To that end, Parvizi and Chafe hope to apply their work to develop a device that listens for the telltale brain patterns of an ongoing seizure or a post-ictal fatigued brain state.

“Someone – perhaps a mother caring for a child – who hasn’t received training in interpreting visual EEGs can hear the seizure rhythms and easily appreciate that there is a pathological brain phenomenon taking place,” Parvizi said.

The device can also offer biofeedback to non-epileptic patients who want to hear the music their own brain waves create.

This video is for the audio recording mentioned above.

The effort to build this device is funded by Stanford’s Bio-X Interdisciplinary Initiatives Program (Bio-X IIP), which provides money for interdisciplinary projects that have potential to improve human health in innovative ways. Bio-X seed grants have funded 141 research collaborations connecting hundreds of faculty since 2000. The proof-of-concept projects have produced hundreds of publications, dozens of patents, and more than a tenfold return on research funds to Stanford.

From a clinical perspective, the work is still very experimental.

“We’ve really just stuck our finger in there,” Chafe said. “We know that the music is fascinating and that we can hear important dynamics, but there are still wonderful revelations to be made.”

Next year, Chafe and Parvizi plan to unveil a version of the system at Stanford’s Cantor Arts Center. Visitors will don a headset that will transmit an EEG of their brain activity to their handheld device, which will convert it into music in real time.

“This is what I like about Stanford,” Parvizi said. “It nurtures collaboration between fields that are seemingly light-years apart – we’re neurology and music professors! – and our work together will hopefully make a positive impact on the world we live in.”