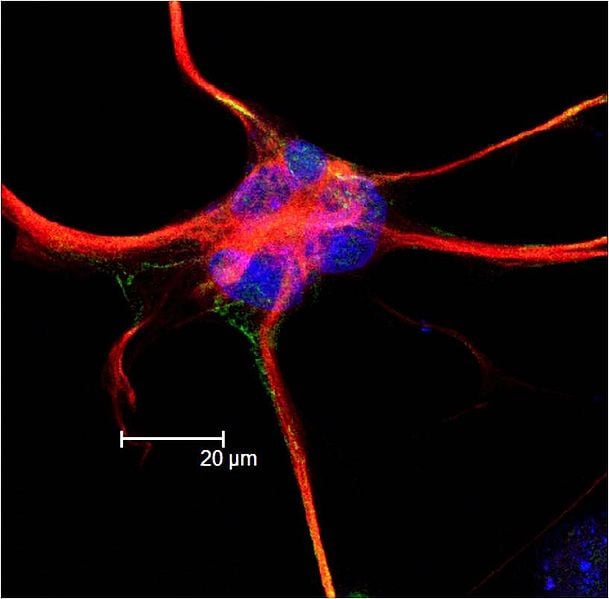 Astrocytes may be central to the constant fine-tuning and reconfiguring of brain circuits occurring throughout our lives in response to experiences such as learning, recollection, emotion and motion. This is an astrocyte, labeled with GFAP (red), Focal Adhesion Kinase (FAK) green, and nuclear stain To-Pro (blue). The image is for illustrative purposes only and is not connected to the research.
Home
Featured

Stanford University School of Medicine neuroscientists have discovered a new role played by a common but mysterious class of brain cells.

Their findings, published online Nov. 24 in Nature, show that these cells, called astrocytes because of their star-like shape, actively refine nerve-cell circuits by selectively eliminating synapses — contact points through which nerve cells, or neurons, convey impulses to one another — much as a sculptor chisels away excess bits of rock to create an artwork.

“This was an entirely unknown function of astrocytes,” said Ben Barres, MD, PhD, professor and chair of neurobiology and the study’s senior author. The lead author was Won-Suk Chung, PhD, a postdoctoral scholar in Barres’ lab. More than one-third of all the cells in the human brain are astrocytes. But until quite recently, their role in the brain has remained obscure.

The study was performed on brain tissue from mice, but it is likely to apply to people as well, Barres said.

The discovery adds to a growing body of evidence that substantial remodeling of brain circuits takes place in the adult brain and that astrocytes are master sculptors of its constantly evolving synaptic architecture. The findings also raise the question of whether deficits and excesses in this astrocytic function could underlie, respectively, the loss of this remodeling capacity in old age or the wholesale destruction of synapses that erupts in neurodegenerative disorders, such as Alzheimer’s and Parkinson’s disease.

“Astrocytes are in the driver’s seat when it comes to synapse formation, function and elimination,” Barres said. In previous studies, he and his colleagues have shown that astrocytes play a critical role in determining exactly where and when new synapses are generated.

The new study showed that astrocytes’ synapse-gobbling behavior persists into adulthood and is triggered by activity in the neurons, suggesting astrocytes may be central to the constant fine-tuning and reconfiguring of brain circuits occurring throughout our lives in response to experiences such as learning, recollection, emotion and motion. While a healthy brain’s neurons remain intact for much a person’s lifetime, the connections between them — the synapses — are constantly forming, strengthening, weakening or dying.

The Barres team also has previously implicated another brain cell type, collectively known as microglia, in synaptic pruning in early development, when the young brain undergoes ongoing episodes of circuit remodeling. The role of astrocytes in synaptic refining, the new study shows, differs from that of microglia both in timing and mechanism.

Barres’ team began to suspect astrocytes’ participation in the pruning process when, having developed methods for isolating exceptionally pure populations of different types of brain cells, they saw that the genes for two separate biochemical pathways were active in astrocytes. Both of these pathways are involved in phagocytosis, the trash-collection process by which specialized cells in the body engulf, ingest and digest dead cells; foreign materials, including bacteria; debris from wounds; and so forth. At the leading end of the two pathways were two phagocytic receptors, MERKTK and MEGF10, which in other cell types have been shown to bind to particular proteins on targeted cells or materials, triggering the ensuing engulfment, ingestion and digestion of the targets.

It’s known that much of an astrocyte’s surface membrane is typically in close contact with neurons. In fact, a single astrocyte may ensheathe thousands of synapses. It was only natural, Barres said, to wonder whether astrocytes play some role in eliminating synapses.

The researchers first demonstrated that both MERKTK and MEGF10, along with their entire tool kits of cooperating proteins, are present in living astrocytes in the mouse brain. (In unpublished work, they have since confirmed this using human astrocytes.) Next, they showed that mouse astrocytes in a lab dish eagerly gobbled up synapses and dispatched them to their lysosomes, highly acidic internal garbage disposals found in most cells in the body. But this engulfment was dependent on astrocytes having functional MEGF10 and MERTK. Disabling one or the other receptor’s function cut in half astrocytes’ ability to engorge themselves on synapses; knocking out both receptors lowered the synapse-eating activity by about 90 percent.

To see if this happens in real life, Chung, Barres and their associates turned to a familiar experimental model: a brain area called the lateral geniculate nucleus, which is a critical component of the brain’s vision-processing system. The LGN receives inputs from neurons just a couple of steps downstream from the photoreceptors in the retina. In early development, neurons in the LGN are innervated by inputs from both eyes. But at a critical point in development, a highly selective synaptic-pruning process kicks in, resulting in each neuron from one side of the LGN being contacted pretty much only by neurons from a single eye. This pruning process in the LGN is dependent on the transmission of waves of spontaneous neuronal impulses originating in the retina.

Experimenting with mice that had entered the critical period for synaptic pruning in the LGN, the investigators labeled the incoming neurons in this system with different-colored stains so their synaptic regions could be identified within astrocytes if the astrocytes ate them up. And sure enough, a lot of this label turned up inside astrocytes’ lysosomes, indicating that astrocytes were actively ingesting synapses. Knocking out one or another or, especially, both of the two phagocytic receptors greatly reduced the amount of labeled synaptic material found in astrocytes. Impairing astrocytic MERKTK and MEGF10 function also caused a failure of LGN neurons to restrict their inputs to only neurons from just one eye, clearly implicating astrocytes in that process. Electrophysiology experiments proved that the LGN neurons in the MERKTK- and MEGF10-knockout mice retained an excessive number of synapses, demonstrating that astrocytes play an active role in pruning synapses during development.

Importantly, injection of a drug blocking the transmission of spontaneous waves of electrical impulses originating in the retina severely impaired astrocytes’ ability to eat synapses, showing that the synapse-pruning propensity is linked to neuronal activity. Other tests showed that astrocytic phagocytosis of synapses continues into adulthood.

Researchers Find the Adhesions That Build the Brain’s Networks

Barres said this raises the question of whether astrocytes function throughout life to continually restructure our neuronal circuitry in response to experientially induced brain activity. If astrocytes’ synaptic snacking slows with aging, as that of other phagocytic cell types is known to do, it could reduce the aging brain’s capacity to adapt to new experiences, he said. “Maybe you need the astrocytes to gobble up old synapses to make room for new ones.”

If so, it may be possible someday to design drugs to keep astrocytes’ phagocytic process from slowing, Barres added. Such drugs might prevent the accumulation in aging brains of past-their-prime synapses, which are vulnerable to degeneration in Alzheimer’s, Parkinson’s and other neurodegenerative disease characterized by massive synapse loss.

The study was funded by the National Institute of Neurological Disorders and Stroke (grant 5R21NS072556), the McKnight Foundation and the Damon Runyon Cancer Research Foundations.

Exercise May Reduce Brain Inflammation, Reducing the Risk of Alzheimer’s