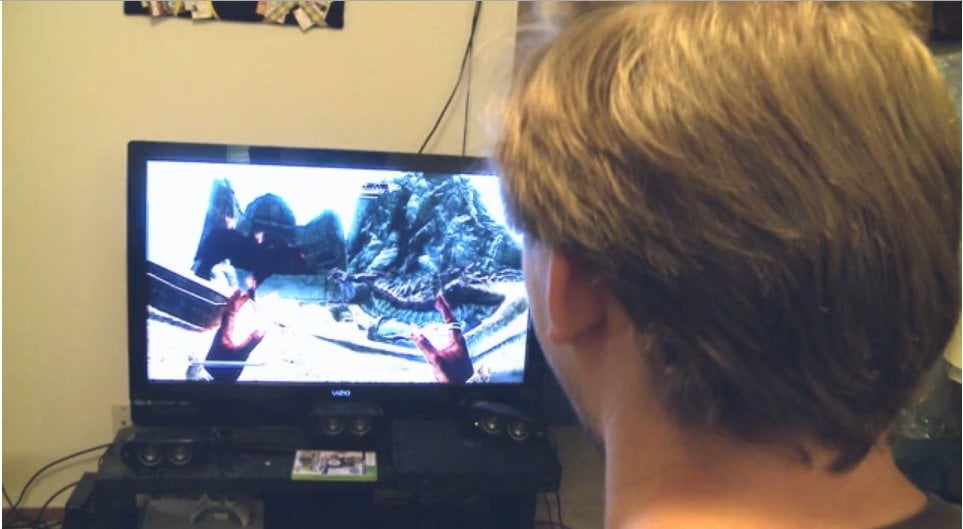 According to the researcher, problematic video game use isn't very different from other types of addictive behaviors such as alcohol or drug abuse. Video game addiction includes a number of unhealthy behaviors, from lying about how much time is spent playing the game to missing real life obligations. This image shows a person playing a video game and is adapted from the University of Missouri video below.
Home
Featured

Researchers Identify Risk Factors for Addictive Video-Game Use Among Adults

“The biggest risk factor for pathological video game use seems to be playing games to escape from daily life,” said Joe Hilgard, a doctoral candidate in the Department of Psychological Sciences in the MU College of Arts and Science. “Individuals who play games to get away from their lives or to pretend to be other people seem to be those most at-risk for becoming part of a vicious cycle. These gamers avoid their problems by playing games, which in turn interferes with their lives because they’re so busy playing games.”

Problematic video game use is more than just excessive use of video games; it also includes a variety of unhealthy behaviors, such as lying to others about how much time is spent playing games and missing work or other obligations to play games.

“People who play games to socialize with other players seem to have more problems as well,” Hilgard said. “It could be that games are imposing a sort of social obligation on these individuals so that they have to set aside time to play with other players. For example, in games like World of Warcraft, most players join teams or guilds. If some teammates want to play for four hours on a Saturday night, the other players feel obligated to play or else they may be cut from the team. Those play obligations can mess with individuals’ real-life obligations.”

Problematic video game use isn’t all that different from other types of addictive behavior, such as alcohol or drug abuse, which can be spurred by poor coping strategies, Hilgard said.

“Gamers who are really into getting to the next level or collecting all of the in-game items seem to have unhealthier video-game use,” Hilgard said. “When people talk about games being ‘so addictive,’ usually they’re referring to games like Farmville or Diablo that give players rewards, such as better equipment or stronger characters, as they play. People who are especially motivated by these rewards can find it hard to stop playing.”

“Researchers have suspected that Massively Multiplayer Online Role-Playing Games (MMORPGs) are the most addictive genre of video games,” Hilgard said. “Our study provides some evidence that supports that claim. The games provide opportunities for players to advance levels, to join teams and to play with others. In addition, the games provide enormous fantasy worlds that gamers can disappear into for hours at a time and forget about their problems. MMORPGs may be triple threats for encouraging pathological game use because they present all three risk factors to gamers.”

How Thick Is a Soup? Logarithmic Perception and How We Perceive Liquid Thickness

Notes about this video game addiction and psychology research

The open-access journal, Frontiers in Psychology, published the article, “Individual differences in motives, preferences, and pathology in video games: the gaming attitudes, motives, and experiences scales (GAMES),” earlier in September. Bruce Bartholow, a professor of psychological sciences at MU also co-authored the study.