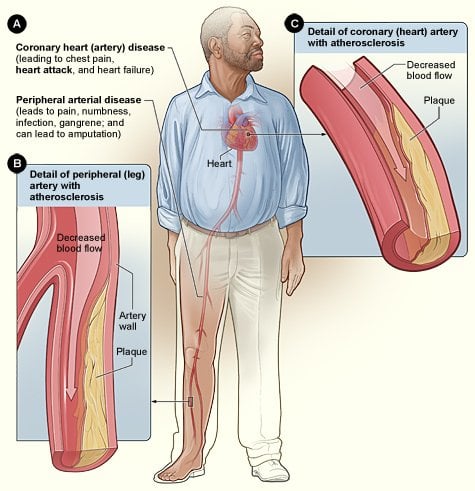 Researchers estimated the cost to government of 9/11-induced smoking at $530 million to $830 million, and potentially higher if the smoking continued beyond 2003. The image shows the effects of smoking on the body and is used for illustrative purposes.
Home
Featured

The 9/11 attacks on America appear to have caused about one million former smokers across the country to take up the habit again and maintain it, according to a Weill Cornell Medical College public health study.

The analysis, published in the June 20 issue of the journal Contemporary Economic Policy, is the first to look at the net costs to society of terrorism-induced smoking in the United States after 9/11 and the 1995 Oklahoma City bombing.

“This helps us better understand what the real costs of such disasters are in human and economic tolls, and it suggests ways that such future stressful reactions that result in excess smoking might be avoided,” says the study’s author, Dr. Michael F. Pesko, an instructor in Weill Cornell Medical College’s Department of Public Health. While the Oklahoma City bombing didn’t affect smoking rates in the U.S., Pesko suggests that 9/11 caused a significant 2.3 percent increase nationwide. The increase started after 9/11 and continued through the end of 2003, when analysis of the data ended, he says.

Self-reported stress was also found to especially increase in communities with a higher concentration of active-duty and reserve members of the military, and among higher-educated groups. The increase in stress following 9/11 was found to account for all of the increase in smoking.

“This study provides the first unbiased estimate of the effect of stress on smoking, and the finding that there was such a big increase in smoking nationwide, seemingly due to one event, is extraordinary, and surprising,” says Dr. Pesko. “It sheds light on a hidden cost of terrorism.”

Dr. Pesko has long been interested in the relationship between stress and substance abuse. “There is a consensus in the research community that stress is a very large motivator for individuals to use substances, but this has not really been studied very thoroughly,” he says.

To shed light on the relationship, Pesko chose two domestic terrorist attacks and examined data from the Behavioral Risk Factor Surveillance System, which tracks annual rates of risky personal behavior across the nation. Health departments in every state conduct monthly phone surveys of residents, asking about seat-belt use, smoking and drinking habits, the last time they visited a doctor or dentist, etc. The Centers for Disease Control and Prevention then aggregates that data and extrapolates it into an annual, nationally representative report. Since the same questions are asked yearly, responses can be compared over time, Dr. Pesko says. He chose to examine self-reported days of stress and what he considers to be a bona fide stress response — whether former smokers begin smoking again.

Dr. Pesko compared 1,657,985 responses to the nationally representative questionnaire, and extrapolated that from the fourth quarter of 2001 through 2003, when the study ended, between 950,000 and 1.3 million adult former smokers resumed smoking, representing a 2.3 percent increase in adult smokers across the country. There was no increase in the months and years following the Oklahoma City bombing.

“I was really surprised to find that former smokers across the nation resumed their old habit,” Dr. Pesko says. “I was expecting to see impacts just in the New York City area — or, at most, the tri-state area.”

Schizophrenia and Bipolar Disorder May Be Detectable Years Before Illnesses Begin

He estimated the cost to government of 9/11-induced smoking at $530 million to $830 million, and potentially higher if the smoking continued beyond 2003. These figures represent changes in the use of Medicare and Medicaid, productivity losses associated to illness from smoking, and decreased tax revenue linked to lost work. The figure also takes into account increased tax revenue from cigarette purchases.

The study findings suggest a potential public health response to future stress-inducing events, says Dr. Pesko. One possibility would be programs that offer free nicotine replacement therapy soon after the events, he says. “Another strategy would be to alert health professionals to do more substance abuse screening during regular medical appointments following terrorist attacks, or any such event that is likely to stress the nation,” he says.

Notes about this stress and smoking research