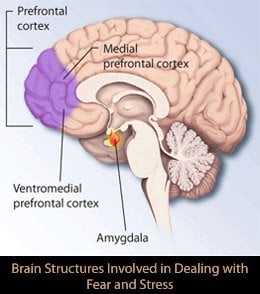 The researchers also found that short sleep duration (less than six hours of sleep per night), separate from general insomnia, was associated with new-onset PTSD symptoms. This illustrative image shows the areas of the brain involved in dealing with fear and stress associated with PTSD.
Home
Featured

Pre-existing Symptoms of Insomnia Linked to the Development of PTSD and Other Mental Disorders, Following Military Deployment

A new study from the Perelman School of Medicine at the University of Pennsylvania and the Naval Health Research Center has shown Military service members who have trouble sleeping prior to deployments may be at greater risk of developing posttraumatic stress disorder (PTSD), depression and anxiety once they return home. The new study, published in the July 2013 issue of the journal SLEEP, found that pre-existing insomnia symptoms conferred almost as a large of a risk for those mental disorders as combat exposure.

“Understanding environmental and behavioral risk factors associated with the onset of common major mental disorders is of great importance in a military occupational setting,” said lead study author Philip Gehrman, PhD, assistant professor of Psychology in the Department of Psychiatry, member of the Penn Sleep Center, and the Philadelphia VA Medical Center. “This study is the first prospective investigation of the relationship between sleep disturbance and development of newly identified positive screens for mental disorders in a large military cohort who have been deployed in support of the recent operations in Iraq or Afghanistan.”

Using self-reported data from the Millennium Cohort Study, the research team evaluated the association of pre-deployment sleep duration and insomnia symptoms on the development of new-onset mental disorders among deployers. Multivariable logistic regression was used to estimate the odds of developing PTSD, depression, and anxiety, while adjusting for relevant covariates including combat-related trauma.

They analyzed data from 15,204 service members, including only those servicemen and women on the timing of their first deployment across all branches and components of military service. They identified 522 people with new-onset PTSD, 151 with anxiety, and 303 with depression following deployment. In adjusted models, combat-related trauma and pre-deployment insomnia symptoms were significantly associated with higher odds of developing posttraumatic stress disorder, depression, and anxiety.

The researchers also found that short sleep duration (less than six hours of sleep per night), separate from general insomnia, was associated with new-onset PTSD symptoms.

“We found that insomnia is both a symptom and a risk factor for mental illness and may present a modifiable target for intervention among military personnel,” says Gehrman. “We hope that by early identification of those most vulnerable, the potential exists for the designing and testing of preventive strategies that may reduce the occurrence of PTSD, anxiety, and depression.”

The research team says that additional study is needed to investigate whether routine inquiry about insomnia symptoms and application of appropriate early, effective interventions reduces subsequent morbidity from mental disorders. They note that in a military population, assessment of insomnia symptoms could easily be incorporated into routine pre-deployment screening.

How the Brain Affects the Way We Perceive Movies

Notes about this PTSD and insomnia research

The Millennium Cohort Study is funded through the Military Operational Medicine Research Program of the US Army Medical Research and Materiel Command, Fort Detrick, Maryland.