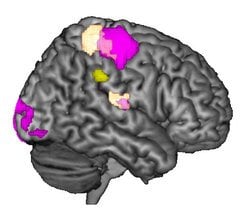 View of the right brain hemisphere: during incongruent experiments, the supramarginal gyrus (yellow) is particularly connected to the dark purple brain areas. The light purple areas are activated through tactile stimuli on the hand. Credited to MPI f. Human Cognitive and Brain Sciences/Silani et al., The Journal of Neuroscience.
Home
Featured

A research team headed by Tania Singer from the Max Planck Institute for Human Cognitive and Brain Sciences has discovered that our own feelings can distort our capacity for empathy. This emotionally driven egocentricity is recognised and corrected by the brain. When, however, the right supramarginal gyrus doesn’t function properly or when we have to make particularly quick decisions, our empathy is severely limited.

When assessing the world around us and our fellow humans, we use ourselves as a yardstick and tend to project our own emotional state onto others. While cognition research has already studied this phenomenon in detail, nothing is known about how it works on an emotional level. It was assumed that our own emotional state can distort our understanding of other people’s emotions, in particular if these are completely different to our own. But this emotional egocentricity had not been measured before now.

This is precisely what the Max Planck researchers have accomplished in a complex marathon of experiments and tests. They also discovered the area of the brain responsible for this function, which helps us to distinguish our own emotional state from that of other people. The area in question is the supramarginal gyrus , a convolution of the cerebral cortex which is approximately located at the junction of the parietal, temporal and frontal lobe. “This was unexpected, as we had the temporo-parietal junction in our sights. This is located more towards the front of the brain,” explains Claus Lamm, one of the publication’s authors.

On the empathy trail with toy slime and synthetic fur

Using a perception experiment, the researchers began by showing that our own feelings actually do influence our capacity for empathy, and that this egocentricity can also be measured. The participants, who worked in teams of two, were exposed to either pleasant or unpleasant simultaneous visual and tactile stimuli.

While participant 1, for example, could see a picture of maggots and feel slime with her hand, participant 2 saw a picture of a puppy and could feel soft, fleecy fur on her skin. “It was important to combine the two stimuli. Without the tactile stimulus, the participants would only have evaluated the situation ‘with their heads’ and their feelings would have been excluded,” explains Claus Lamm. The participants could also see the stimulus to which their team partners were exposed at the same time.

The two participants were then asked to evaluate either their own emotions or those of their partners. As long as both participants were exposed to the same type of positive or negative stimuli, they found it easy to assess their partner’s emotions. The participant who was confronted with a stinkbug could easily imagine how unpleasant the sight and feeling of a spider must be for her partner.

Differences only arose during the test runs in which one partner was confronted with pleasant stimuli and the other with unpleasant ones. Their capacity for empathy suddenly plummeted. The participants’ own emotions distorted their assessment of the other person’s feelings. The participants who were feeling good themselves assessed their partners’ negative experiences as less severe than they actually were. In contrast, those who had just had an unpleasant experience assessed their partners’ good experiences less positively.

Particularly quick decisions cause a decline in empathy

The researchers pinpointed the area of the brain responsible for this phenomenon with the help of functional magnetic resonance imaging, generally referred to as a brain scanning. The right supramarginal gyrus ensures that we can decouple our perception of ourselves from that of others. When the neurons in this part of the brain were disrupted in the course of this task, the participants found it difficult not to project their own feelings onto others. The participants’ assessments were also less accurate when they were forced to make particularly quick decisions.

Up to now, the social neuroscience models have assumed that we mainly draw on our own emotions as a reference for empathy. This only works, however, if we are in a neutral state or the same state as our counterpart – otherwise, the brain must counteract and correct.