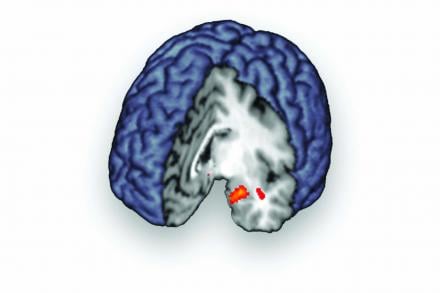 A brain image showing in orange/red one area of the brain where the natural painkiller (opioid) system was highly active in research volunteers who are experiencing social rejection. This region, called the amygdala, was one of several where the U-M team recorded the first images of this system responding to social pain, not just physical pain. Studying this response, and the variation between people, could aid understanding of depression and anxiety. Credited to UofM Health.
Home
Featured

Finding that the opioid system can act to ease social pain, not just physical pain, may aid understanding of depression and social anxiety.

“Sticks and stones may break my bones, but words will never hurt me,” goes the playground rhyme that’s supposed to help children endure taunts from classmates. But a new study suggests that there’s more going on inside our brains when someone snubs us – and that the brain may have its own way of easing social pain.

The findings, recently published in Molecular Psychiatry by a University of Michigan Medical School team, show that the brain’s natural painkiller system responds to social rejection – not just physical injury.

What’s more, people who score high on a personality trait called resilience – the ability to adjust to environmental change – had the highest amount of natural painkiller activation.

The team, based at U-M’s Molecular and Behavioral Neuroscience Institute, used an innovative approach to make its findings. They combined advanced brain scanning that can track chemical release in the brain with a model of social rejection based on online dating. The work was funded by the U-M Depression Center, the Michigan Institute for Clinical and Health Research, the Brain & Behavior Research Foundation, the Phil F Jenkins Foundation, and the National Institutes of Health.

They focused on the mu-opioid receptor system in the brain – the same system that the team has studied for years in relation to response to physical pain. Over more than a decade, U-M work has shown that when a person feels physical pain, their brains release chemicals called opioids into the space between neurons, dampening pain signals.

David T. Hsu, Ph.D., the lead author of the new paper, says the new research on social rejection grew out of recent studies by others, which suggests that the brain pathways that are activated during physical pain and social pain are similar.

“This is the first study to peer into the human brain to show that the opioid system is activated during social rejection,” says Hsu, a research assistant professor of psychiatry. “In general, opioids have been known to be released during social distress and isolation in animals, but where this occurs in the human brain has not been shown until now.”

The study involved 18 adults who were asked to view photos and fictitious personal profiles of hundreds of other adults. Each selected some who they might be most interested in romantically – a setup similar to online dating.

But then, when the participants were lying in a brain imaging machine called a PET scanner, they were informed that the individuals they found attractive and interesting were not interested in them.

Brain scans made during these moments showed opioid release, measured by looking at the availability of mu-opioid receptors on brain cells. The effect was largest in the brain regions called the ventral striatum, amygdala, midline thalamus, and periaqueductal gray – areas that are also known to be involved in physical pain.

The researchers had actually made sure the participants understood ahead of time that the “dating” profiles were not real, and neither was the “rejection.” But nonetheless, the simulated social rejection was enough to cause both an emotional and opioid response.

Hsu notes that the underlying personality of the participants appeared to play a role in how much of a response their opioid systems made.

The more opioid release during social rejection in another brain area called the pregenual cingulate cortex, the less the participants reported being put in a bad mood by the news that they’d been snubbed.

The researchers also examined what happens when the participants were told that someone they’d expressed interest in had expressed interest in them – social acceptance. In this case, some brain regions also had more opioid release. “The opioid system is known to play a role in both reducing pain and promoting pleasure, and our study shows that it also does this in the social environment,” says Hsu.

The new research holds more importance than just pure discovery, note the authors, who also include senior author Jon-Kar Zubieta, M.D., Ph.D., a longtime opioid researcher. Specifically, they are pursuing further research on how those who are vulnerable to, or currently suffering from depression or social anxiety have an abnormal opioid response to social rejection and/or acceptance.

“It is possible that those with depression or social anxiety are less capable of releasing opioids during times of social distress, and therefore do not recover as quickly or fully from a negative social experience. Similarly, these individuals may also have less opioid release during positive social interactions, and therefore may not gain as much from social support,” Hsu theorizes.

Hsu also notes that perhaps new opioid medications without addictive potential may be an effective treatment for depression and social anxiety. Although such medications are not yet available, he adds, “increasing evidence for the neural overlap of physical and social pain suggests a significant opportunity to bridge research in the treatment of chronic pain with the treatment of psychiatric disorders.”

If nothing else, perhaps knowing that our response to a social snub isn’t “all in our heads” can help some people understand their responses and cope better, Hsu says. “The knowledge that there are chemicals in our brains working to help us feel better after being rejected is comforting.”