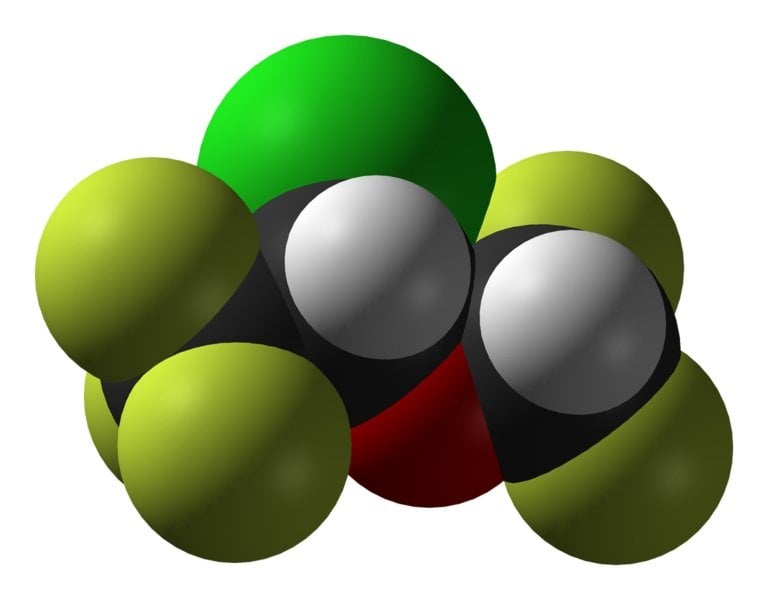 In a recent pilot study conducted with patients who suffered drug resistant depression, researchers compared the results of 20 patients who had undergone ECT with 8 patients who received Isoflurane treatment. Both techniques significantly reduced symptoms of depression. However, patients who were treated with the anesthetic showed no real impairment of memory or processing speeds, and greater improvements in cognitive testing over those treated with conventional ECT. This image is a 3D representation of Isoflurane.
Home
Featured

Although electroconvulsive therapy (ECT) has long been considered the most effective treatment of medication-resistant or refractory depression, millions of people who might benefit don’t take advantage of it because of the treatment’s side effects and public misperception of the procedure.

If the results of a campuswide collaboration of University of Utah researchers are borne out by larger studies and trials, patients with refractory depression might one day have an alternative that is as effective as ECT but without the side effects – the surgical anesthetic drug isoflurane.

“We need to expand our research into a larger, multicenter trial, but if the results of our pilot study pan out, it would change the face of treating depression,” says Howard R. Weeks, M.D., assistant professor of psychiatry and first author on a study published in Friday, July 26, 2013, in the journal PLOS One online.

Also known as shock therapy, ECT is effective in 55 percent to 90 percent of depression cases, with significant reductions in symptoms typically occurring within two to four weeks. When medications work, they can take six to eight weeks to become effective. But ECT is associated with side effects including amnesia, concentration and attention problems, and other cognitive issues. Many people also mistakenly believe ECT is painful and causes brain damage, which has given the treatment a social stigma that makes millions of patients reluctant to have the therapy. Isoflurane potentially offers an alternative to ECT that could help many of those people, according to Weeks and his colleagues from eight University of Utah departments and programs.

In a pilot study with 20 patients who received ECT treatments compared to eight patients who received the isoflurane treatments, the researchers found that both therapies provided significant reduction in symptoms of depression. Immediately following the treatments, ECT patients showed declines in areas of memory, verbal fluency, and processing speed. Most of these ECT-related deficits did resolve by four weeks. However, autobiographical memory, or recall of personal life events, remained below pretreatment levels for ECT patients four weeks after the treatment. In contrast, the patients treated with isoflurane showed no real impairment but instead had greater improvements in cognitive testing than ECT patients both immediately and four weeks after the treatments.

Recently, another anesthetic, Ketamine, has drawn interest as a potential treatment for depression. But studies so far have not shown long-lasting effects from using Ketamine. In contrast, isoflurane showed continued antidepressant effects four weeks after the treatments.

In the mid-1980s, researchers in Europe studied isoflurane as a potential depression therapy. Later studies by other scientists, however, failed to confirm the results of the original work and isoflurane research fell out of favor. But these later studies didn’t adhere to the first study’s protocol regarding type of anesthetic, dosing size and number of treatments, according to Weeks, and he believes that’s why isoflurane’s antidepressant effects weren’t confirmed in subsequent trials. For their research, Weeks and his University colleagues followed the original study’s protocol. “Our data reconfirm that isoflurane had an antidepressant effect approaching ECT with less adverse neurocognitive effects, and reinforce the need for a larger clinical trial,” the researchers wrote.

Researchers don’t know what produces the relief of depression symptoms from ECT or isoflurane. Weeks believes further study might identify a molecular pathway that both therapies target and is responsible for the improvement in depression. One common effect of both ECT and isoflurane treatments is a brief state of low electrical activity in which the brain becomes unusually quiet. ECT induces a seizure to reach that state, but isoflurane does not. After inhaling the anesthesia, patients are “under” for about 45 minutes, with 15 minutes of that time being a deep state of unconsciousness, according to Weeks. This period of electrical rest for the brain may be a potential explanation for why ECT and isoflurane improve depression.

If isoflurane proves to be a viable alternative to ECT, a device invented by three University of Utah anesthesiology faculty members can make the anesthetic an even more attractive therapy. The Aneclear™ device (Anecare, Salt Lake City, UT) invented by Dwayne R. Westenskow, Ph.D., Derek J. Sakata, M.D., and Joseph A. Orr, Ph.D., from the University of Utah Department of Anesthesiology, uses hyperventilation and allows patients to rebreathe their own carbon dioxide (C02). Hyperventilation removes anesthesia from the lungs and C02 encourages blood flow to the brain, which encourages quicker removal of anesthetic. The Aneclear™ also minimizes or even eliminates vomiting, nausea and extreme fatigue that some patients experience from anesthesia.

“With the Aneclear™, we can wake people up from the anesthesia much quicker,” Weeks says. “This makes the treatment a potentially viable clinical treatment by reducing the time required in an operating room.”

Weeks and his co-researchers now are looking for grants to fund a larger study that will include several U.S. centers.

Notes about this neuropharmacology and depression research