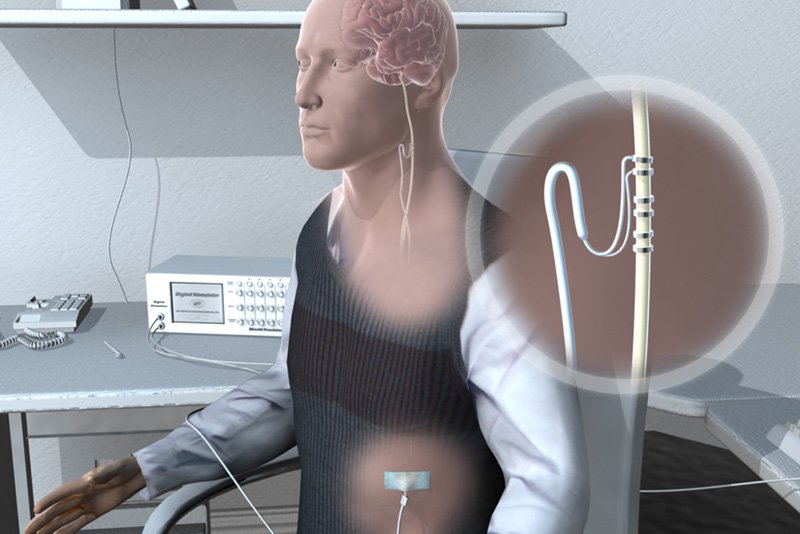 For the study, a stimulation electrode was implanted directly on the vagus nerve of 10 tinnitus sufferers. They received 2 ½ hours of daily treatment for 20 days.
Home
Featured

UT Dallas researchers have demonstrated that treating tinnitus, or ringing in the ears, using vagus nerve stimulation-tone therapy is safe and brought significant improvement to some of the participants in a small clinical trial.

Drs. Sven Vanneste and Michael Kilgard of the School of Behavioral and Brain Sciences used a new method pairing vagus nerve stimulation (VNS) with auditory tones to alleviate the symptoms of chronic tinnitus. Their results were published on Nov. 20 in the journal Neuromodulation: Technology at the Neural Interface.

VNS is an FDA-approved method for treating various illnesses, including depression and epilepsy. It involves sending a mild electric pulse through the vagus nerve, which relays information about the state of the body to the brain.

“The primary goal of the study was to evaluate safety of VNS-tone therapy in tinnitus patients,” Vanneste said. “VNS-tone therapy was expected to be safe because it requires less than 1 percent of the VNS approved by the FDA for the treatment of intractable epilepsy and depression. There were no significant adverse events in our study.”

According to Vanneste, more than 12 million Americans have tinnitus severe enough to seek medical attention, of which 2 million are so disabled that they cannot function normally. He said there has been no consistently effective treatment.

The study, which took place in Antwerp, Belgium, involved implanting 10 tinnitus sufferers with a stimulation electrode directly on the vagus nerve. They received 2 ½ hours of daily treatment for 20 days. The participants had lived with tinnitus for at least a year prior to participating in the study, and showed no benefit from previous audiological, drug or neuromodulation treatments. Electrical pulses were generated from an external device for this study, but future work could involve using internal generators, eliminating the need for clinical visits.

Half of the participants demonstrated large decreases in their tinnitus symptoms, with three of them showing a 44-percent reduction in the impact of tinnitus on their daily lives. Four people demonstrated clinically meaningful reductions in the perceived loudness of their tinnitus by 26 decibels.

Five participants, all of whom were on medications for other problems, did not show significant changes. However, the four participants who benefited from the therapy were not using any medications. The report attributes drug interactions as blocking the effects of the VNS-tone therapy.

“In all, four of the 10 patients showed relevant decreases on tinnitus questionnaires and audiological measures,” Vanneste said. “The observation that these improvements were stable for more than two months after the end of the one month therapy is encouraging.”

Notes about this neurology and DBS research

Researchers Visualize the Intricate Branching of the Nervous System

Researchers at the University Hospital Antwerp, Belgium, and MicroTransponder Inc. also contributed to the study.