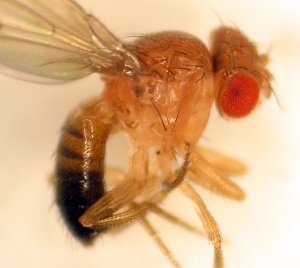 Laboratory fruit flies are used for quick screening of candidate drug treatments for Duchenne muscular dystrophy. The researchers used the Drosophila melanogaster fruit fly, an image of which is posted above.
Home
Featured

A trace substance in caramelized sugar, when purified and given in appropriate doses, improves muscle regeneration in a mouse model of Duchenne muscular dystrophy. The findings are published today, Aug. 1, in the journal Skeletal Muscle.

Morayma Reyes, professor of pathology and laboratory medicine, and Hannele Ruohola-Baker, professor of biochemistry and associate director of the Institute for Stem Cell and Regenerative Medicine, headed the University of Washington team that made the discovery. The first authors of the paper were Nicholas Ieronimakis,UW Department of Pathology; and Mario Pantoja, UW Department of Biochemistry.

They explained that the mice in their study, like boys with the gender-linked inherited disorder, are missing the gene that produces dystrophin, a muscle-repair protein. Neither the mice nor the affected boys can replace enough of their routinely lost muscle cells. In people, muscle weakness begins when the boys are toddlers, and progresses until, as teens, they can no longer walk unaided. During early adulthood, their heart and respiratory muscles weaken. Even with ventilators to assist breathing, death usually ensues before age 30. No cure or satisfactory treatment is available. Prednisone drugs relieve some symptoms, but at the cost of severe side effects.

The disabling, then lethal, nature of the rare disease in young men presses scientists to search for better therapeutic agents. Reyes and Ruohola-Baker are seeking ways to suppress the disorder’s characteristic functional and structural muscle defects.

Ruohola-Baker’s lab originally identified the sphingosine 1-phosphate (S1P) pathway as a critical player in ameliorating muscular dystrophy in flies. Her lab did this through a large genetic suppressor screen using the fruit fly, Drosophila melanogaster. Sphingosine 1-phosphate is found in the cells of most living beings from yeasts to mammals. Named after the enigmatic sphinx, this cell signal is important in many activities of living cells, from migration to proliferation. The multi-talented, bioactive lipid is essential, Reyes said, in turning stem cells into specific types of cells, in regenerating damaged tissue, and in inhibiting cell death. Without cell receptors for sphingosine 1-phosphate, an embryo would fail to develop.

Instead, Reyes and Ruohola-Baker sought to prevent the sphingosine 1-phosphate occurring naturally in the body from degrading. A fruit fly model of Duchenne muscular dystrophy allowed Ruohola-Baker’s lab to rapidly score small molecule therapy candidates for raising the level of sphingosine 1-phosphate. Flies with the genetic defect act normally after they hatch and fly around, but in a few weeks, due to muscle degeneration, they are flightless. By using insect activity monitors, the scientists assessed the effects of drug and gene therapy candidates on the flies’ ability to move.

This screening tool led to the discovery that a small molecule with a long name, 2-acetyl4 (5)-tetrahydroxybutyl imidazole, or THI for short, blocks an enzyme that breaks down sphingosine 1-phosphate.

“It’s interesting to note that THI is a trace component of Caramel Color III, which the U.S. Food and Drug Administration categories as ‘generally recognized as safe’,” said Reyes. The substance is also found in very tiny amounts in burnt sugar, brown sugar, beer, cola and some candies.

The researchers added a purified, concentrated form of THI to the food of young flies with the muscular dystrophy-like mutation. They confirmed that the THI alleviated muscle wasting in the flies. A few other drugs, including a THI derivative and an unrelated drug now in clinical trials for rheumatoid arthritis, also showed beneficial effects in fruit flies.

The study of THI then switched from insects to mammals. Reyes lab began by treating old dystrophic mice with direct injection of THI. Later, the researchers simply added the compound to the drinking water in the habitats of young dystrophic mice. These mice were comparable in developmental stage to human teens who have muscular dystrophy genetic variation.

“We observed that treatment with THI significantly increased muscle fiber size and muscle-specific force in our affected mice,” Reyes said. “We also saw that other hallmarks of impaired muscle regeneration – fat deposits and fibrosis [scar tissue] accumulation – were also lower in the THI-treated mice.”

The research team linked the desired regenerative effects in the mice to the response of muscle-forming cells and the subsequent regrowth of muscle fibers. A type of sphingosine 1-phosphate, and cell receptors for it, also were observed in the cells in the regenerating muscle fibers. The researchers proposed that sphingosine 1-phosphate turned up the dial on the regulators for the biochemical pathways that mediate skeletal muscle mass and muscle function.

Now that they have shown proof-of-concept, the researchers hope to conduct additional animal studies on THI and other compounds that protect the body’s supply of sphingosine 1-phosphate necessary for muscle cell regeneration. If THI continues to show promise as a nutraceutical or food-based drug, medical scientists will head into pre-clinical studies of effectiveness and safety before advancing to human trials. In addition to muscular dystrophy treatment research, similar studies might also be conducted in the future on loss of muscle strength during normal or accelerated aging.

While excited about the preliminary findings, the scientists cautioned that they are still at the very earliest stages of research, and that much more work needs to be done before any conclusions can be drawn about the potential of THI as a muscular dystrophy treatment.

Notes about this Muscular Dystrophy research

The researchers have filed a federal patent on sphingosine 1-phosphate-promoting therapies for muscular dystrophy. They have not received any benefits from any organization with a financial stake in the research and have no competing financial interests in analyzing and reporting their findings.

The work was supported by the University of Washington Department of Pathology and Department of Laboratory Medicine, a Provost Bridge grant, a Nathan Shock Center of Excellence in the Basic Biology of Aging, Genetic Approaches to Aging Training Grant, and the American Recovery and Reinvestment Act of 2009 Challenge Grants 5RC1AR058520, R01GM083867, R01GM097372, and 1P01GM081619.

The researchers would like to thank the many patients with muscular dystrophy and their families and friends who encourage and support the scientists in their efforts.