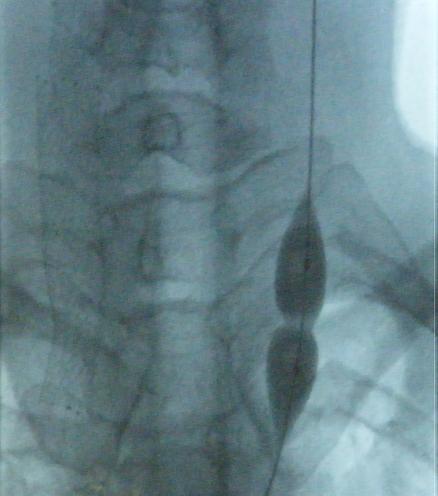 Using both ultrasound and catheter venography to examine the veins of MS patients, their siblings and unrelated healthy people, researchers found at least two-thirds of each group had extracranial vein narrowing which was greater than 50%. The differences in rates of venous narrowing between all groups was not significantly significant. This image, which is not connected to the research and is for illustrative purposes only, shows a balloon dilatation of stenosis of the left internal jugular vein in a patient with CCSVI.
Home
Featured

Study Finds No Link Between Venous Narrowing and Multiple Sclerosis

A study led by Dr. Anthony Traboulsee of the University of British Columbia and Vancouver Coastal Health to see whether narrowing of the veins from the brain to the heart could be a cause of multiple sclerosis has found that the condition is just as prevalent in people without the disease.

The results, published in the U.K. medical journal The Lancet, call into question a controversial theory that MS is associated with a disorder proponents call chronic cerebrospinal venous insufficiency (CCSVI).

The study used both ultrasound and catheter venography (an x-ray of the vein after injecting it with a dye) to examine the veins of people with MS, their unrelated siblings and unrelated healthy volunteers. Catheter venography is considered the most accurate, “gold standard” technology for revealing the size and shape of veins, says Traboulsee, an associate professor of Neurology at UBC and director of the MS Clinic at UBC Hospital of Vancouver Coastal Health.

By comparing the width of veins between the brain and the heart with a normal reference point taken from below the jaw, the researchers showed that at least two-thirds of each of the groups had narrowing of the extracranial veins that was greater than 50 per cent. Differences in rates of venous narrowing between the groups were not statistically significant.

“Our results confirm that venous narrowing is a frequent finding in the general population, and is not a unique anatomical feature associated with multiple sclerosis,” Traboulsee says. “This is the first study to find high rates of venous narrowing in a healthy control group, as well as the first to show that the ultrasound criteria usually used to ‘diagnose’ CCSVI are unreliable. The connection between venous narrowing and MS remains unknown, and it would certainly appear to be much more complicated than current theories suggest.”

The CCSVI theory: First put forth by Dr. Paolo Zamboni of Italy in 2009, the theory holds that narrowing of the extracranial veins between the brain and the heart leads to MS, and that angioplasty to widen those veins – sometimes called the “liberation procedure” – can be an effective treatment for some people with the disease.

Study team: The UBC-Vancouver Coastal Health study was done in collaboration with the University of Saskatchewan and funded by the MS Society of Canada.

Drink Coffee After Breakfast, Not Before, for Better Metabolic Control

Study design: The researchers examined the extracranial veins of 79 people with MS, 55 of their unaffected siblings, and 43 unrelated healthy volunteers (controls), using both ultrasound and catheter venography.

“Death knell”: In a related commentary in The Lancet, Dr. Friedemann Paul of Germany and Dr. Mike Wattjes of the Netherlands suggest that the new results sound a “death knell” for the hypothesis of CCSVI as a disease entity. “If chronic cerebrospinal venous insufficiency actually existed, the ultrasound findings of this study and previous studies would suggest that up to half of the general and otherwise healthy population should be judged to be seriously ill because of venous insufficiency of the cervical veins,” they write. “The fact that some changes in the venous system have been described in association with multiple sclerosis does not imply causality.”