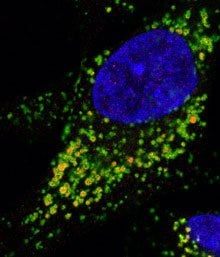 A Step Towards Early Alzheimer’s Diagnosis

If Alzheimer’s disease is to be treated in the future it requires an early diagnosis, which is not yet possible. Now researchers at higher education institutions such as Linköping University have identified six proteins in spinal fluid that can be used as markers for the illness.

Alzheimer’s causes great suffering and has a one hundred percent fatality rate. The breakdown of brain cells has been in progress for ten years or more by the time symptoms begin to appear. Currently there is no treatment that can stop the process.

Most researchers now agree that one cause of the illness is toxic accumulations – plaques – of the beta amyloid protein. In a healthy brain, the cells are cleansed of such surplus products through lysosomes, the cells’ “waste disposal facilities”.

“In victims of Alzheimer’s, something happens to the lysosomes so that they can’t manage to take care of the surplus of beta amyloid. They fill up with junk that normally is broken down into its component parts and recycled,” says Katarina Kågedal, reader in Experimental Pathology at Linköping University. She led the study that is now being published in Neuromolecular Medicine.

The researchers’ hypothesis was that these changes in the brain’s lysosomal network could be reflected in the spinal fluid, which surrounds the brain’s various parts and drains down into the spinal column. They studied samples of spinal marrow from 20 Alzheimer’s patients and an equal number of healthy control subjects. The screening was aimed at 35 proteins that are associated with the lysosomal network.

“Six of these had clearly increased in the patients; none of them were previously known as markers for Alzheimer’s,” says Kågedal.

Her hope is that the group’s discovery will contribute to early diagnoses of the illness, which is necessary in the first stage in order to be able to begin reliable clinical tests of candidates for drugs. But perhaps the six lysosomal proteins could also be “drug targets” – targets for developing drugs.

“It may be a question of strengthening protection against plaque formation or reactivating the lysosomes so that they manage to break down the plaque,” Kågedal says.

The study was conducted on 20 anonymised, archived spinal marrow samples and the results were confirmed afterwards on an independent range of samples of equal size. All samples were provided by the Laboratory for Clinical Chemistry at Sahlgrenska University Hospital.