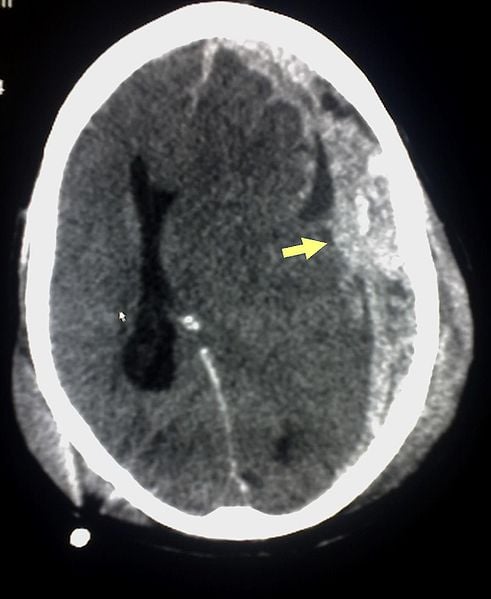 Researchers evaluated the pathological impact of both single incident TBI, such as those sustained during combat, and mild, repetitive TBI, commonly seen in boxers and football players. They hoped to better understand what measures need to be taken in order to identify risk, early instances of TBI and to reduce long term complications.The image is a CT scan of a subdural hemorrhage caused by traumatic brain injury.
Home
Featured

One of the most controversial topics in neurology today is the prevalence of serious permanent brain damage after traumatic brain injury (TBI). Long-term studies and a search for genetic risk factors are required in order to predict an individual’s risk for serious permanent brain damage, according to a review article published by Sam Gandy, MD, PhD, from the Icahn School of Medicine at Mount Sinai in a special issue of Nature Reviews Neurology dedicated to TBI.

About one percent of the population in the developed world has experienced TBI, which can cause serious long-term complications such as Alzheimer’s disease (AD) or chronic traumatic encephalopathy (CTE), which is marked by neuropsychiatric features such as dementia, Parkinson’s disease, depression, and aggression. Patients may be normal for decades after the TBI event before they develop AD or CTE. Although first described in boxers in the 1920s, the association of CTE with battlefield exposure and sports, such as football and hockey, has only recently begun to attract public attention.

“Athletes such as David Duerson and Junior Seau have brought to light the need for preventive measures and early diagnosis of CTE, but it remains highly controversial because hard data are not available that enable prediction of the prevalence, incidence, and individual risk for CTE,” said Dr. Gandy, who is Professor of Neurology and Psychiatry and Director of the Center for Cognitive Health at Mount Sinai. “We need much more in the way of hard facts before we can advise the public of the proper level of concern.”

Led by Dr. Gandy, the authors evaluated the pathological impact of single-incident TBI, such as that sustained during military combat; and mild, repetitive TBI, as seen in boxers and National Football League (NFL) players to learn what measures need to be taken to identify risk and incidence early and reduce long-term complications.

Mild, repetitive TBI, as is seen in boxers, football players, and occasionally military veterans who suffer multiple blows to the head, is most often associated with CTE, or a condition called “boxer’s dementia.” Boxing scoring includes a record of knockouts, providing researchers with a starting point in interpreting an athlete’s risk. But no such records exist for NFL players or soldiers on the battlefield.

Dr. Gandy and the authors of the Nature Reviews Neurology piece suggest recruiting large cohorts of players and military veterans in multi-center trials, where players and soldiers maintain a TBI diary for the duration of their lives. The researchers also suggest a genome-wide association study to clearly identify risk factors of CTE. “Confirmed biomarkers of risk, diagnostic tools, and long-term trials are needed to fully characterize this disease and develop prevention and treatment strategies,” said Dr. Gandy.

Amyloid imaging, which has recently been approved by the U.S. Food and Drug Administration, may be useful as a monitoring tool in TBI, since amyloid plaques are a hallmark symptom of AD-type neurodegeneration. Amyloid imaging consists of a PET scan with an injection of a contrast agent called florbetapir, which binds to amyloid plaque in the brain, allowing researchers to visualize plaque deposits and determine whether the diagnosis is CTE or AD, and monitor progression over time. Tangle imaging is expected to be available soon, complementing amyloid imaging and providing an affirmative diagnosis of CTE. Dr. Gandy and colleagues recently reported the use of amyloid imaging to exclude AD in a retired NFL player with memory problems under their care at Mount Sinai.

Clinical diagnosis and evaluation of mild, repetitive TBI is a challenge, indicating a significant need for new biomarkers to identify damage, report the authors. Measuring cerebrospinal fluid (CSF) may reflect damage done to neurons post-TBI. Previous research has identified a marked increase in CSF biomarkers in boxers when the CSF is taken soon after a fight, and this may predict which boxers are more likely to develop detrimental long-term effects. CSF samples are now only obtained by invasive lumbar puncture; a blood test would be preferable.

“Biomarkers would be a valuable tool both from a research perspective in comparing them before and after injury and from a clinical perspective in terms of diagnostic and prognostic guidance,” said Dr. Gandy. “Having the biomarker information will also help us understand the mechanism of disease development, the reasons for its delayed progression, and the pathway toward effective therapeutic interventions.”

Currently, there are no treatments for boxer’s dementia or CTE, but these diseases are preventable. “With more protective equipment, adjustments in the rules of the game, and overall education among athletes, coaches, and parents, we should be able to offer informed consent to prospective sports players and soldiers. With the right combination of identified genetic risk factor, biomarkers, and better drugs, we should be able to dramatically improve the outcome of TBI and prevent the long-term, devastating effects of CTE,” said Dr. Gandy.

Mount Sinai is one of five medical centers in the country selected to be part of the new Neurological Care Program for retired NFL players. The Center for Cognitive Health provides expert care for patients struggling with memory and other cognitive impairments, across a full range of ages and disorders. The Center brings together internationally-recognized neurologists, psychiatrists, neuropsychologists, neuroscientists, and patient care managers as one team, skilled in providing thorough diagnosis, customized treatment, and access to clinical trials.

Notes about this neurological dysfunction and TBI research