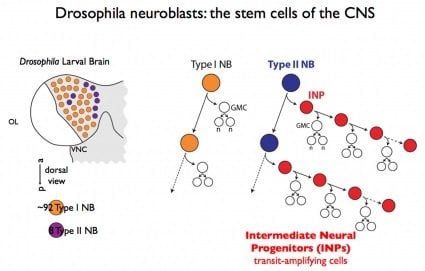 The study concludes that neuroblasts and INP patterning act together to generate increased neural diversity within the central complex of the fruit fly and that progenitors in the human cerebral cortex may use similar mechanisms to increase neural diversity in the human brain. One long-term application of the research may be to eventually pinpoint stem cell treatments to target specific diseases and disorders. Credited to Chris Doe, University of Oregon.
Home
Featured

A new study examining the brains of fruit flies reveals a novel stem cell mechanism that may help explain how neurons form in humans. A paper on the study by researchers at the University of Oregon appeared in the online version of the journal Nature in advance of the June 27 publication date.

“The question we confronted was ‘How does a single kind of stem cell, like a neural stem cell, make all different kinds of neurons?'” said Chris Doe, a biology professor and co-author on the paper “Combinatorial temporal patterning in progenitors expands neural diversity.”

Researchers have known for some time that stem cells are capable of producing new cells, but the new study shows how a select group of stem cells can create progenitors that then generate numerous subtypes of cells.

“Instead of just making 100 copies of the same neuron to expand the pool, these progenitors make a whole bunch of different neurons in a particular way, a sequence,” Doe said. “Not only are you bulking up the numbers but you’re creating more neural diversity.”

The study, funded by the Howard Hughes Medical Institute and the NIH National Institute of Child Health and Human Development, builds on previous research from the Doe Lab published in 2008. That study identified a special set of stem cells that generated neural progenitors. These so-called intermediate neural progenitors (INPs) were shown to blow up into dozens of new cells. The research accounted for the number of cells generated, but did not explain the diversity of new cells.

“While it’s been known that individual neural stem cells or progenitors could change over time to make different types of neurons and other types of cells in the nervous system, the full extent of this temporal patterning had not been described for large neural stem cell lineages, which contain several different kinds of neural progenitors,” said lead author Omar Bayraktar, a doctoral student in developmental neurobiology who recently defended his dissertation.

The cell types in the study, Bayraktar said, have comparable analogs in the developing human brain and the research has potential applications for human biologists seeking to understand how neurons form.

The Nature paper appears alongside another study on neural diversity by researchers from New York University. Together the two papers provide new insight into the processes involved in producing the wide range of nerve cells found in the brains of flies.

For their study, Bayraktar and Doe zeroed in on the stem cells in drosophila (fruit flies) known as type II neuroblasts. The neuroblasts, which had previously been shown to generate INPs, were shown in this study to be responsible for a more complex patterning of cells. The INPs were shown to sequentially generate distinct neural subtypes. The research accounted for additional neural diversity by revealing a second axis in the mechanism. Instead of making 100 neurons, as had been previously thought, a stem cell may be responsible for generating some 400 or 500 neurons.

The study concludes that neuroblasts and INP patterning act together to generate increased neural diversity within the central complex of the fruit fly and that progenitors in the human cerebral cortex may use similar mechanisms to increase neural diversity in the human brain. One long-term application of the research may be to eventually pinpoint stem cell treatments to target specific diseases and disorders.

“If human biologists understand how the different types of neurons are made, if we can tell them ‘This is the pathway by which x, y and z neurons are made,’ then they may be able to reprogram and redirect stem cells to make these precise neurons,” Doe said.

The mechanism described in the paper has its limits. Eventually the process of generating new cells stops. One of the next questions to answer will be what makes the mechanism turn off, Doe said.

“This vital research will no doubt capture the attention of human biologists,” said Kimberly Andrews Espy, vice president for research and innovation and dean of the UO graduate school. “Researchers at the University of Oregon continue to further our understanding of the processes that undergird development to improve the health and well-being of people throughout the world.”

Notes about this neural stem cell an neuroscience research