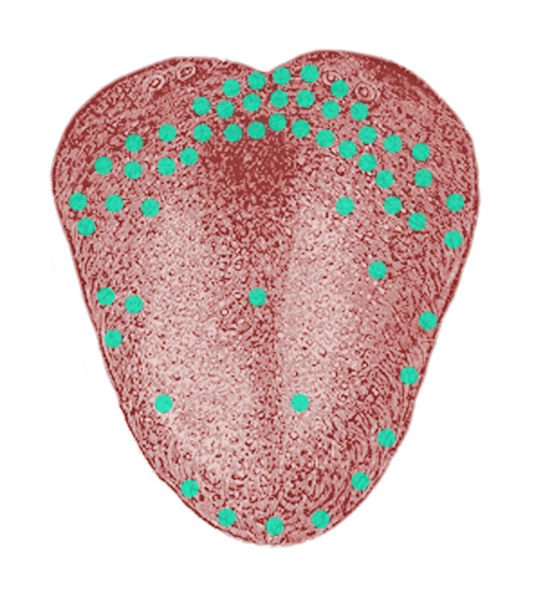 Researchers discover a person's sensitivity to bitter taste is not only shaped by taste genes, but also how much mRNA their cells produce. This image shows the location of the bitter taste buds on the tongue.
Home
Featured

Do you love chomping on raw broccoli while your best friend can’t stand the healthy veggie in any form or guise? Part of the reason may be your genes, particularly your bitter taste genes.

Over the past decade, scientists at the Monell Center and elsewhere have made headway in understanding how variants of bitter taste receptor genes can help account for how people differ with regard to taste perception and food choice.

However, some perplexing pieces of the puzzle remained, as two people with exactly the same genetic makeup can still differ markedly regarding how bitter certain foods and liquids taste to them.

Now, findings from Monell reveal that a person’s sensitivity to bitter taste is shaped not only by which taste genes that person has, but also by how much messenger RNA – the gene’s instruction guide that tells a taste cell to build a specific receptor – their cells make.

Under normal circumstances, people whose taste receptor cells make more messenger RNA (mRNA) for a given gene make more of the encoded receptor.

The findings add a new level of complexity to our understanding of the cellular mechanisms of taste perception, which may ultimately lend insight into individual differences in food preferences and dietary choices.

“The amount of messenger RNA that taste cells choose to make may be the missing link in explaining why some people with ‘moderate-taster’ genes still are extremely sensitive to bitterness in foods and drinks,” said Monell taste geneticist Danielle Reed, PhD, who is an author on the study.

In the study, reported online in the American Journal of Clinical Nutrition, small biopsies of papillae – the little bumps on the tongue that contain taste receptors – were taken from 18 people known to have the same moderate-taster (heterozygous) genotype for the TASR38 bitter taste receptor and the amount of mRNA expression for this genotype was measured.

Before the biopsy, people rated the intensity of various bitter and non-bitter solutions, including broccoli juice. Even though the subjects had the same ‘middle-of-the road’ genotype, their responses to some of the bitter substances varied over four orders of magnitude. Analyses revealed a direct relationship between mRNA expression and bitterness ratings of broccoli juice, with subjects having the most mRNA rating the juice as most bitter.

Do Our Genes Determine What We Eat?

“The next step involves learning more about what causes these individual differences in mRNA expression; does diet drive expression or is it the reverse? And, can differences in expression explain why children are more sensitive to bitter than adults with the same genotype?” said co-author Julie Mennella PHD, a developmental psychobiologist at Monell.

Notes about this neurogenetics and taste research