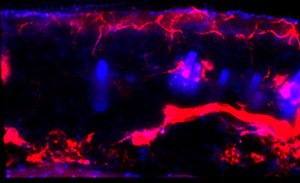 In genetically engineered mice that are prone to chronic itching, researchers identified elevated signaling (shown in red) in nerve cells involved in both itch and in pain.
Home
Featured

Anyone who has suffered through sleepless nights due to uncontrollable itching knows that not all itching is the same. New research at Washington University School of Medicine in St. Louis explains why.

Working in mice, the scientists have shown that chronic itching, which can occur in many medical conditions, from eczema and psoriasis to kidney failure and liver disease, is different from the fleeting urge to scratch a mosquito bite.

The new discovery may lead to more effective treatments for chronic itching that target activity in neurons involved in both pain and itch. The research is reported online Oct. 15 in The Journal of Clinical Investigation and will appear in the November print issue.

“In normal itching, there’s a fixed pathway that transmits the itch signal,” said senior investigator Zhou-Feng Chen, PhD, who directs Washington University’s Center for the Study of Itch. “But with chronic itching, many neurons can be turned into itch neurons, including those that typically transmit pain signals. That helps explain why chronic itching can be so excruciating.”

Chen, a professor of anesthesiology, and his colleagues generated mice in which a protein called BRAF always is active and continually sends signals inside itch neurons. The BRAF gene and the protein it makes are involved in the body’s pain response, but scientists didn’t know whether the gene also played a role in itch.

“We thought the animals might be prone to feeling pain rather than itching,” Chen explained. “To our great surprise, the mice scratched spontaneously. At first, we didn’t know why they were scratching, but it turns out we developed a mouse model of chronic itch.”

Further studies discovered that the BRAF protein could turn on many itch genes, and they showed similar changes of gene expression in mice with chronic itch induced by dry skin and in mice with allergic contact dermatitis, two of the skin conditions that frequently cause people to scratch incessantly.

The findings suggest that targeting proteins in the BRAF pathway may open new avenues for treating chronic itch, a condition in which few therapies are effective. One possibility includes using drugs that are prescribed to treat pain.

“Certain drugs are used to inhibit some of the same targets in patients with chronic pain, and those medications also may quiet down itch,” Chen said.

In earlier studies, Chen identified gastrin-releasing peptide (GRP), a substance that carries itch signals to a gene called GRPR (gastrin-releasing peptide receptor) in the spinal cord. In the new study, GRP and GRPR activity was doubled in the genetically altered mice, which could account for some of the increase in the intensity of itching. But other genes that normally are activated by pain also were turned on in the itch pathway, further intensifying the itch sensation.

Surprisingly, however, the mice had a normal response to pain, indicating that the pain and itch pathways are very different.

Unlike scratching a mosquito bite, which usually is only a temporary sensation, chronic itch can persist much longer, according to Chen, also a professor of psychiatry and of developmental biology. His team found that the mice in this study not only scratched spontaneously but also had more severe responses when exposed to substances that normally would induce acute itching.

“In people, chronic itching can last for weeks, months or even years,” Chen said. “These mice are helping us to understand the pathways that can be involved in transmitting itch signals and the many contributors to chronic itching. There are many pathways leading from BRAF, and all of these could be potential targets for anti-itch therapies.”