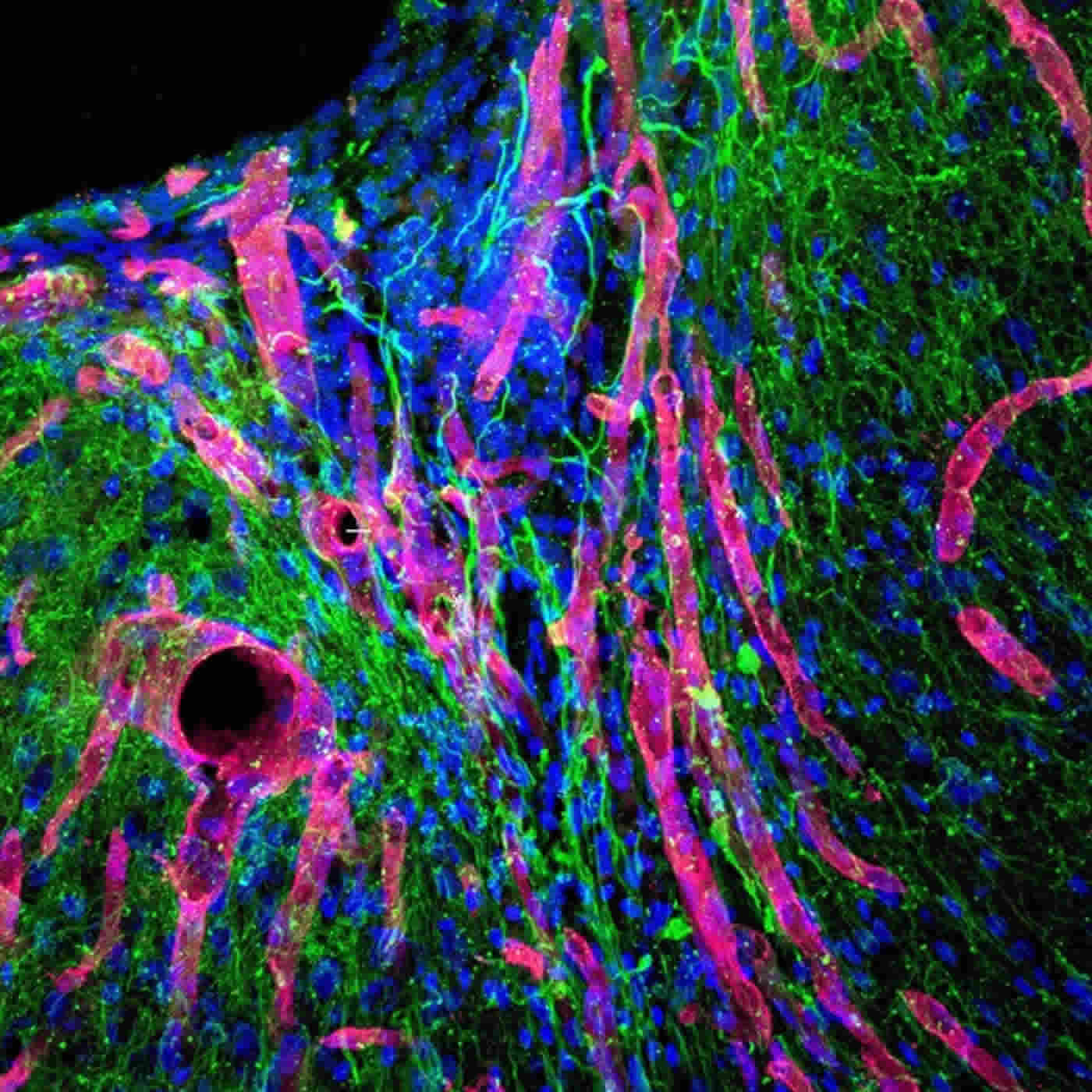 In a first-of-its-kind finding, a new stroke-healing gel helped regrow neurons and blood vessels in mice with stroke-damaged brains, UCLA researchers report in the May 21 issue of Nature Materials.

“We tested this in laboratory mice to determine if it would repair the brain in a model of stroke, and lead to recovery,” said Dr. S. Thomas Carmichael, Professor and Chair of neurology at UCLA. “This study indicated that new brain tissue can be regenerated in what was previously just an inactive brain scar after stroke.”

The results suggest that such an approach may someday be a new therapy for stroke in people, said Dr. Tatiana Segura, a former Professor of Chemical and Biomolecular Engineering at UCLA who is now a professor at Duke University. Carmichael and Segura collaborated on the study.

The brain has a limited capacity for recovery after stroke and other diseases. Unlike some other organs in the body, such as the liver or skin, the brain does not regenerate new connections, blood vessels or new tissue structures. Tissue that dies in the brain from stroke is absorbed, leaving a cavity, devoid of blood vessels, neurons or axons, the thin nerve fibers that project from neurons.

To see if healthy tissue surrounding the cavity could be coaxed into healing the stroke injury, Segura engineered a gel to inject into the stroke cavity that thickens to mimic the properties of brain tissue, creating a scaffolding for new growth.

The gel is infused with molecules that stimulate blood vessel growth and suppress inflammation, since inflammation results in scars and impedes regrowth of functional tissue.

After 16 weeks, stroke cavities in mice contained regenerated brain tissue, including new neural networks – a result that had not been seen before. The mice with new neurons showed improved motor behavior, though the exact mechanism wasn’t clear.

“The new axons could actually be working,” said Segura. “Or the new tissue could be improving the performance of the surrounding, unharmed brain tissue.”

The gel was eventually absorbed by the body, leaving behind only new tissue.

This research was designed to explore recovery in acute stroke, or the period immediately following stroke – in mice, that is five days; in humans, that is two months. Next, Carmichael and Segura are determining if brain tissue can be regenerated in mice long after the stroke injury. More than 6 million Americans are living with the long-term outcomes of stroke, known as chronic stroke.

Funding: The study was supported by funds from the National Institutes of Health.

In addition to Carmichael and Segura, other authors of the paper are Lina Nih and Shiva Gojgini, both of UCLA.

Stroke is the primary cause of disability due to the brain’s limited ability to regenerate damaged tissue. After stroke, an increased inflammatory and immune response coupled with severely limited angiogenesis and neuronal growth results in a stroke cavity devoid of normal brain tissue. In the adult, therapeutic angiogenic materials have been used to repair ischaemic tissues through the formation of vascular networks. However, whether a therapeutic angiogenic material can regenerate brain tissue and promote neural repair is poorly understood. Here we show that the delivery of an engineered immune-modulating angiogenic biomaterial directly to the stroke cavity promotes tissue formation de novo, and results in axonal networks along thee generated blood vessels. This regenerated tissue produces functional recovery through the established axonal networks. Thus, this biomaterials approach generates a vascularized network of regenerated functional neuronal connections within previously dead tissue and lays the groundwork for the use of angiogenic materials to repair other neurologically diseased tissues.