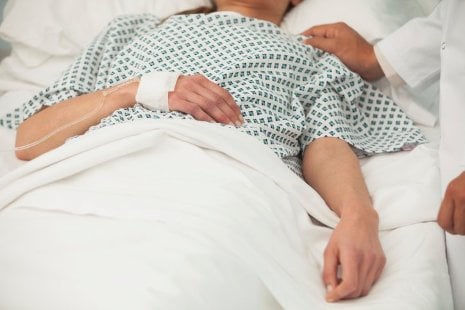 Not everyone who seems unconscious is unaware. Syd Johnson says it's critical to pursue ways to communicate with people who appear unresponsive, particularly since decisions made on their behalf are often a matter of life and death.
Home
Featured

Researcher Seeks to Help Those Who Can’t Speak for Themselves

When people appear comatose, how can we know their wishes?

A Michigan Technological University researcher says many non-communicative individuals may actually be able to express themselves better than is widely thought.

Syd Johnson, assistant professor of philosophy, has just published a paper in the American Journal of Bioethics: Neuroscience that argues that even patients with severe brain injuries could have more self-determination and empowerment. “New research with people using just their brains to communicate reveals that more of them might be able to make their own decisions,” she says.

Those decisions can literally be life and death, and the first question a caregiver should ask is “How do we determine if they are capable—as an ordinary person would be—of making these decisions?” Johnson asks.

She says because of their brain injuries, many have limited attention spans or movement/speech disorders that make it very difficult to communicate. “That’s why it’s important to find ways of assessing their wellbeing other than by asking them,” she says. “Being able to do that would open up the possibility of assessing quality of life even in those who have never been able to communicate, such as infants or people born with severe cognitive disabilities.”

And that leads to the tough questions, Johnson points out.

“Who makes the decision that someone desires, or not, to live in this state? Who makes the life assessment for people: to treat them or to allow them to die.”

The range of potential patients runs the gamut from grandparents to infants, Johnson says. Sometimes you can’t ask them, including those with cognitive disabilities, but sometimes you can.

She acknowledges the complexity of the issue, especially when decisions involve quality of life. “We assume they don’t want to live that way, but sometimes, are they okay?”

She uses the example of locked-in syndrome, where patients can blink “yes” or “no.” A majority says they are doing okay.

“So, then do we make a decision based on what we think it is like to be in that position?” Johnson says.

Many people adjust to this new way of life, she says, and it’s important for caregivers to get into their mind, to recognize what might be a foreign viewpoint for an able-bodied person.

“Then there are the misdiagnosed,” Johnson says. “As many as 40 percent could be conscious at some level, even in a permanent vegetative state. Even in a nursing home, it can be that no one is assessing them, and they might improve. Nobody is diagnosing anymore, and they are treated as if they are not ever going to get better.”

Researchers around the globe have begun to address these issues, and new evidence is coming in, thanks in part to fMRI: functional magnetic resonance imaging—a technique that directly measures the blood flow in the brain that can provide information on brain activity.

“Even EEGs [electroencephalograms, which measure electrical activity in the brain] can be used,” she says. “The patients can be asked questions and given two things to think about for answers: playing tennis for yes, walking around in their house for no. And different parts of their brain will light up. People can be conscious while appearing outwardly unconscious.”

The end-result could mean reassessing the quality of life, Johnson says. Some patients can be asked—the so-called “covertly aware” patients who are conscious but can communicate only with technological assistance.

“Just as importantly, we might be able to use technology to objectively measure aspects of quality of life even in patients who cannot communicate at all,” Johnson says.

“A person’s quality of life is inherently subjective, and the aim of quality of life assessment has always been to find ways to objectively measure that subjective state of being,” she says. “New technologies like fMRI might be able to provide a different kind of objective assessment of subjective wellbeing—by looking at brain activity—in those individuals who are unable to tell us how they’re doing.”

Notes about this neuroethics and brain injury research