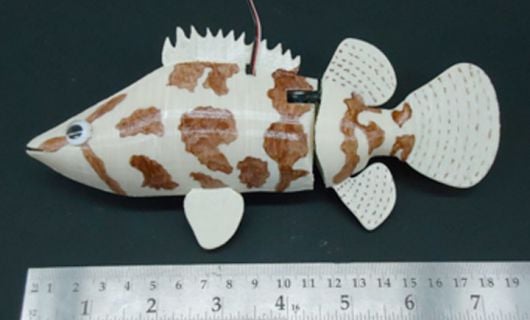 Researchers hypothesized that robots could be used to induce fear as well as affinity and designed a robot mimicking the morphology and locomotion pattern of the Indian leaf fish, a natural predator of the zebrafish. This image shows the robotic Indian leaf fish.
Home
Featured

Robots Strike Fear in the Hearts of Fish

The latest in a series of experiments testing the ability of robots to influence live animals shows that bio-inspired robots can not only elicit fear in zebrafish, but that this reaction can be modulated by alcohol. These findings may pave the way for new methodologies for understanding anxiety and other emotions, as well as substances that alter them.

Maurizio Porfiri, associate professor of mechanical and aerospace engineering at the Polytechnic Institute of New York University (NYU-Poly) and Simone Macrì, a collaborator at the Istituto Superiore di Sanità in Rome, Italy, published their findings in PLOS ONE, an international, peer-reviewed, open-access, online publication.

This latest study expands Porfiri and Macrì’s efforts to determine how bio-inspired robots can be employed as reliable stimuli to elicit reactions from live zebrafish. Previous studies have established that zebrafish show a strong affinity for robotic members designed to swim and appear as one of their own and that this preference can be abolished by exposing the fish to ethanol.

Porfiri and Macri, along with students Valentina Cianca and Tiziana Bartolini, hypothesized that robots could be used to induce fear as well as affinity and designed a robot mimicking the morphology and locomotion pattern of the Indian leaf fish, a natural predator of the zebrafish. In the lab, they simulated a harmless predatory scenario, placing the zebrafish and the robotic Indian leaf fish in separate compartments of a three-section tank. The other compartment was left empty. The control group uniformly avoided the robotic predator, showing a preference for the empty section.

To determine whether alcohol would affect fear responses, the researchers exposed separate groups of fish to different doses of ethanol in water. Ethanol has been shown to influence anxiety-related responses in humans, rodents and some species of fish. The zebrafish exposed to the highest concentrations of ethanol showed remarkable changes in behavior, failing to avoid the predatory robot. Acute administration of ethanol causes no harm and has no lasting effect on zebrafish.

“These results are further evidence that robots may represent an exciting new approach in evaluating and understanding emotional responses and behavior,” said Porfiri. “Robots are ideal replacements as independent variables in tests involving social stimuli—they are fully controllable, stimuli can be reproduced precisely each time, and robots can never be influenced by the behavior of the test subjects.”

To validate their findings and ensure that the zebrafish behavior being modulated was, in fact, a fear-based response, Porfiri and his collaborators conducted two traditional anxiety tests and evaluated whether the results obtained therein were sensitive to ethanol administration.

They placed test subjects in a two-chamber tank with one well-lit side and one darkened side, to establish which conditions were preferable. In a separate tank, they simulated a heron attack from the water’s surface—herons also prey on zebrafish—and measured how quickly and how many fish took shelter from the attack. As expected, the fish strongly avoided the dark compartment, and most sought shelter very quickly from the heron attack. Ethanol exposure significantly modulated these fear responses as well, abolishing the preference for the light compartment and significantly slowing the fishes’ retreat to shelter during the simulated attack.

“We hoped to see a correlation between the robotic Indian leaf fish test results and the results of the other anxiety tests, and the data support that,” Porfiri explained. “The majority of control group fish avoided the robotic predator, preferred the light compartment and sought shelter quickly after the heron attack. Among ethanol-exposed fish, there were many more who were unaffected by the robotic predator, preferred the dark compartment and were slow to swim to shelter when attacked.”

Porfiri and his colleagues believe zebrafish may be a suitable replacement for higher-order animals in tests to evaluate emotional responses. This novel robotic approach would also reduce the number of live test subjects needed for experiments and may inform other areas of inquiry, from collective behavior to animal protection.

Notes about this neurobotics and behavioral neuroscience research

This research was supported by the National Science Foundation, the Honors Center of Italian Universities and the Mitsui USA Foundation.

How Stress and Anxiety Contribute to Youth Violence