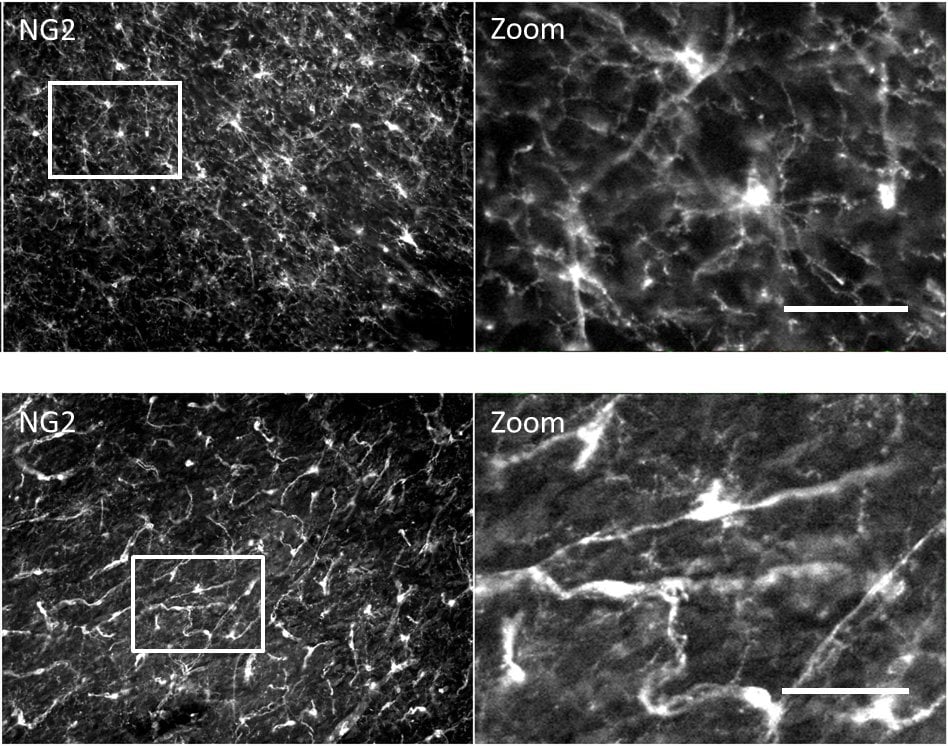 Researcher Decode Mechanisms of Cell Orientation in the Brain

Transmembrane protein NG2 controls orientation of cell migration toward the wound. Publication in the prestigious Journal of Neuroscience.

When the central nervous system is injured, oligodendrocyte precursor cells (OPC) migrate to the lesion and synthesize new myelin sheaths on demyelinated axons. Scientists at the Institute of Molecular Cell Biology at Johannes Gutenberg University Mainz (JGU) have now discovered that a distinct protein regulates the direction and movement of OPC toward the wound. The transmembrane protein NG2, which is expressed at the surface of OPCs and down-regulated as they mature to myelinating oligodendrocytes, plays an important role in the reaction of OPC to wounding. The results of this study have recently been published in the renowned Journal of Neuroscience.

The myelin sheath functions to electrically isolate axons of many nerve fibers and is synthesized by oligodendrocytes which mature from the OPC. In the case of injury, neural cells send out signaling molecules which attract the OPC. The NG2 protein helps OPCs to react to some of these and move in a directed and orientated fashion. “We were able to prove in cell biological experiments that NG2 orientates OPC toward the lesion and ensures targeted OPC migration toward the wound through the regulation of cell polarity”, explained Dr. Fabien Binamé, lead author of the study. Supported by funding of the German Research Foundation (DFG), Dr. Fabien Binamé is currently carrying out his research at the Institute of Molecular Cell Biology headed by Professor Jacqueline Trotter.

“The function and mode of operation of NG2 is not yet fully understood”, added co-author Dominik Sakry, who was also involved in the study. “But it looks as if the NG2-associated regulatory mechanism becomes apparent only in cases of injury of the nervous system.”

Diseases such as Multiple Sclerosis or brain tumors go hand in hand with damage of nerve tissue. “The results of our study on NG2-mediated basic mechanisms of cell orientation and migration could aid in understanding the repair of damaged demyelinated tissue, or be important for treatment of highly active migratory brain tumors which often express high levels of NG2”, said Professor Jacqueline Trotter, head of the JGU Institute of Molecular Cell Biology.