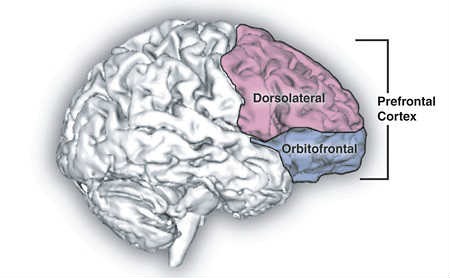 In the pups deprived of fathers, researchers identified defects in the prefrontal cortex. This area of the brain help control cognitive and social activity. The image shows the location of the prefrontal cortex in the human brain and is for illustrative purposes only.
Home
Featured

Dads: How Important Are They?

New MUHC research highlights the value of fathers in both neurobiology and behavior of offspring.

Even with today’s technology, it still takes both a male and a female to make a baby. But is it important for both parents to raise that child? Many studies have outlined the value of a mother, but few have clearly defined the importance of a father, until now. New findings from the Research Institute of the McGill University Health Centre (RI-MUHC) show that the absence of a father during critical growth periods, leads to impaired social and behavioural abilities in adults. This research, which was conducted using mice, was published today in the journal Cerebral Cortex. It is the first study to link father absenteeism with social attributes and to correlate these with physical changes in the brain.

“Although we used mice, the findings are extremely relevant to humans,” says senior author Dr. Gabriella Gobbi, a researcher of the Mental Illness and Addiction Axis at the RI-MUHC and an associate professor at the Faculty of Medicine at McGill University. “We used California mice which, like in some human populations, are monogamous and raise their offspring together.”

“Because we can control their environment, we can equalize factors that differ between them,” adds first author, Francis Bambico, a former student of Dr. Gobbi at McGill and now a post-doc at the Centre for Addiction and Mental Health (CAMH) in Toronto. “Mice studies in the laboratory may therefore be clearer to interpret than human ones, where it is impossible to control all the influences during development.”

Dr. Gobbi and her colleagues compared the social behaviour and brain anatomy of mice that had been raised with both parents to those that had been raised only by their mothers. Mice raised without a father had abnormal social interactions and were more aggressive than counterparts raised with both parents. These effects were stronger for female offspring than for their brothers. Females raised without fathers also had a greater sensitivity to the stimulant drug, amphetamine.

“The behavioural deficits we observed are consistent with human studies of children raised without a father,” says Dr. Gobbi, who is also a psychiatrist at the MUHC. “These children have been shown to have an increased risk for deviant behaviour and in particular, girls have been shown to be at risk for substance abuse. This suggests that these mice are a good model for understanding how these effects arise in humans.”

In pups deprived of fathers, Dr. Gobbi’s team also identified defects in the mouse prefrontal cortex, a part of the brain that helps control social and cognitive activity, which is linked to the behaviourial deficits.

“This is the first time research findings have shown that paternal deprivation during development affects the neurobiology of the offspring,” says Dr. Gobbi. These results should incite researchers to look more deeply into the role of fathers during critical stages of growth and suggest that both parents are important in children’s mental health development.

Notes about this neurobiology and psychology research

Our Attention Is Captured by Eye-Glance