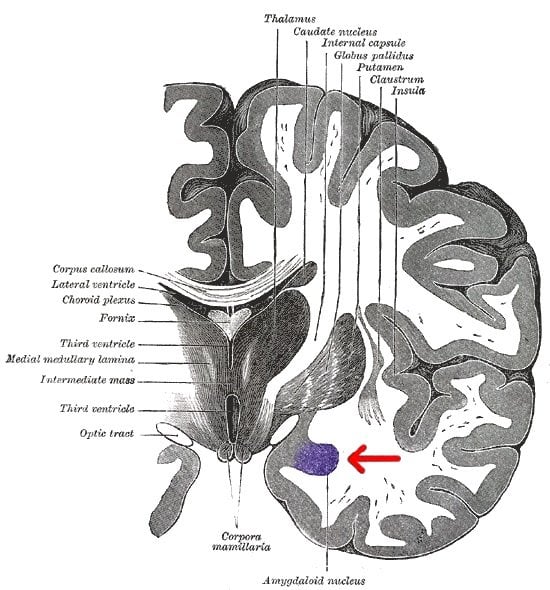 The central amygdala also contains a high concentration of a class of neurotransmitters called dynorphins, which bind to kappa opioid receptors. The diagram shows the location of the amygdala in the brain.
Home
Featured

Scientists at The Scripps Research Institute (TSRI) have found evidence that an emotion-related brain region called the central amygdala—whose activity promotes feelings of malaise and unhappiness—plays a major role in sustaining cocaine addiction.

In experiments with rats, the TSRI researchers found signs that cocaine-induced changes in this brain system contribute to anxiety-like behavior and other unpleasant symptoms of drug withdrawal—symptoms that typically drive an addict to keep using. When the researchers blocked specific brain receptors called kappa opioid receptors in this key anxiety-mediating brain region, the rats’ signs of addiction abated.

“These receptors appear to be a good target for therapy,” said Marisa Roberto, associate professor in TSRI’s addiction research group, the Committee on the Neurobiology of Addictive Disorders. Roberto was the principal investigator for the study, which appears in the journal Biological Psychiatry.

In addition to its clinical implications, the finding represents an alternative to the pleasure-seeking, “positive” motivational circuitry that is traditionally emphasized in addiction.

While changes in these pleasure-seeking brain networks may dominate the early period of drug use, scientists have been finding evidence of changes in the “negative” motivational circuitry as well—changes that move a person to take a drug not for its euphoric effects but for its (temporary) alleviation of the anxiety-ridden dysphoria of drug withdrawal. George F. Koob, chair of TSRI’s Committee on the Neurobiology of Addictive Disorders, has argued that these “dark side” brain changes mark the transition to a more persistent drug dependency.

In a series of recent studies, TSRI researchers including Roberto and Koob have highlighted the role of one of these dark-side actors: the receptor for the stress hormone CRF. Found abundantly in the central amygdala, CRF receptors become persistently overactive there as drug use increases, and that overactivity helps account for the negative symptoms of drug withdrawal.

The central amygdala also contains a high concentration of a class of neurotransmitters called dynorphins, which bind to kappa opioid receptors. Much like the CRF system, the dynorphin/kappa opioid system mediates negative, dysphoric feelings—and there have been hints from previous studies that CRF doesn’t work alone in producing such feelings during addiction.

“Our hypothesis was that the dynorphin/kappa opioid receptor system in the central amygdala also becomes overactive with excessive cocaine use,” said Marsida Kallupi, first author of the paper, who was a postdoctoral research associate in Roberto’s laboratory at the time of the study.

Such overactivity would be expected to arise as the brain struggles to maintain “reward homeostasis”—a middle-of-the-road balance between pleasure and displeasure—despite frequent drug-induced swerves toward euphoria. “Dynorphin possibly acts to balance the euphoric effects produced by other opioid systems during recreational drug use,” said Scott Edwards, who is a research associate in the Koob laboratory and a co-author of the study.

When the TSRI researchers gave rats extended access to cocaine, the rats escalated their daily intake as many human users would. Sensitive electrophysiological measurements revealed signs of a persistent functional overactivity of the GABAergic system in the rats’ central amygdalae—which corresponds to an anxiety-like state in the animals. Probing with compounds that activate or block kappa opioid receptors, the scientists found signs that these receptors, like CRF receptors, do indeed help drive the central amygdala into overactivity during excessive cocaine use.

These results give Roberto and her colleagues hope that a similar treatment might help human cocaine addicts feel less compelled to keep using. Kappa opioid receptor blockers are already being developed for the treatment of depression and anxiety.

Notes about this addiction and neurobiology research

Other contributors to the study, “Kappa Opioid Receptor-Mediated Dysregulation of GABAergic Transmission in the Central Amygdala in Cocaine Addiction,” were Sunmee Wee of the Department of Molecular Therapeutics at TSRI’s Florida campus and Tim W. Whitfield Jr., Christopher S. Oleata, George Luu and Brooke E. Schmeichel of the Committee on the Neurobiology of Addictive Disorders at TSRI’s California campus.