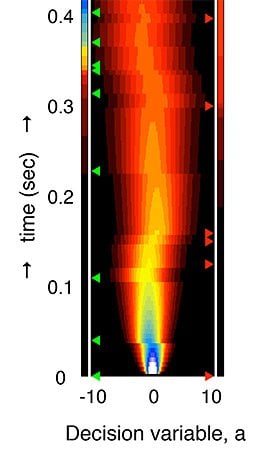 Princeton University researchers found that poor information is more at fault for bad decisions than brain processing. In experiments, humans and rats listened to clicking sounds coming from the left and the right. They then indicated which side had the greater number of clicks based on a running tally from each side. By matching the behavior of the test subject with the series of clicks played, the authors created graphs to describe how a decision is gradually formed. Green arrows represent left clicks and red arrows represent right clicks. The colored area in the center represents the probability, at each point in time, that the subject will accurately tally the clicks. At the beginning of the trial, it is highly likely that the subject will make the correct choice, but the correct answer becomes less likely over time. Credited to Brody Lab, Princeton University.
Home
Featured

Making decisions involves a gradual accumulation of facts that support one choice or another. A person choosing a college might weigh factors such as course selection, institutional reputation and the quality of future job prospects.

These findings address a fundamental question among neuroscientists about whether bad decisions result from noise in the external information — or sensory input — or because the brain made mistakes when tallying that information. In the example of choosing a college, the question might be whether a person made a poor choice because of misleading or confusing course descriptions, or because the brain failed to remember which college had the best ratings.

Previous measurements of brain neurons have indicated that brain functions are inherently noisy. The Princeton research, however, separated sensory inputs from the internal mental process to show that the former can be noisy while the latter is remarkably reliable, said senior investigator Carlos Brody, a Princeton associate professor of molecular biology and the Princeton Neuroscience Institute (PNI), and a Howard Hughes Medical Institute Investigator.

“To our great surprise, the internal mental process was perfectly noiseless. All of the imperfections came from noise in the sensory processes,” Brody said. Brody worked with first author Bingni Brunton, now a postdoctoral research associate in the departments of biology and applied mathematics at the University of Washington; and Matthew Botvinick, a Princeton associate professor of psychology and PNI.

The test subjects mostly chose the correct side but occasionally made errors. By comparing various patterns of clicks with the volunteers’ responses, researchers found that all of the errors arose when two clicks overlapped, and not from any observable noise in the brain system that tallied the clicks. This was true in experiment after experiment utilizing different click patterns, in humans and rats.

“Before we conducted this study, we did not have a way of looking at this process without inserting electrodes into the brain,” Brody said. “Now thanks to our model, we have an estimation of what is going on at each moment in time during the formation of the decision.”

The study suggests that information represented and processed in the brain’s neurons must be robust to noise, Brody said. “In other words, the ‘neural code’ may have a mechanism for inherent error correction,” he said.

“The new work from the Brody lab is important for a few reasons,” said Anne Churchland, an assistant professor of biological sciences at Cold Spring Harbor Laboratory who studies decision-making and was not involved in the study. “First, the work was very innovative because the researchers were able to study carefully controlled decision-making behavior in rodents. This is surprising in that one might have guessed rodents were incapable of producing stable, reliable decisions that are based on complex sensory stimuli.

“This work exposed some unexpected features of why animals, including humans, sometimes make incorrect decisions,” Churchland said. “Specifically, the researchers found that errors are mostly driven by the inability to accurately encode sensory information. Alternative possibilities, which the authors ruled out, included noise associated with holding the stimulus in mind, or memory noise, and noise associated with a bias toward one alternative or the other.”

Notes about this decision making and neuroscience research

The paper, “Rats and Humans Can Optimally Accumulate Evidence for Decision Making,” was published online by Science April 4. The work was funded by the Howard Hughes Medical Institute, Princeton University and National Institutes of Health training grants. 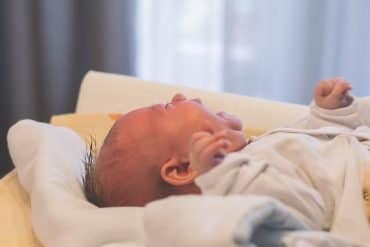 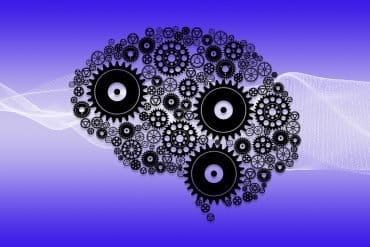