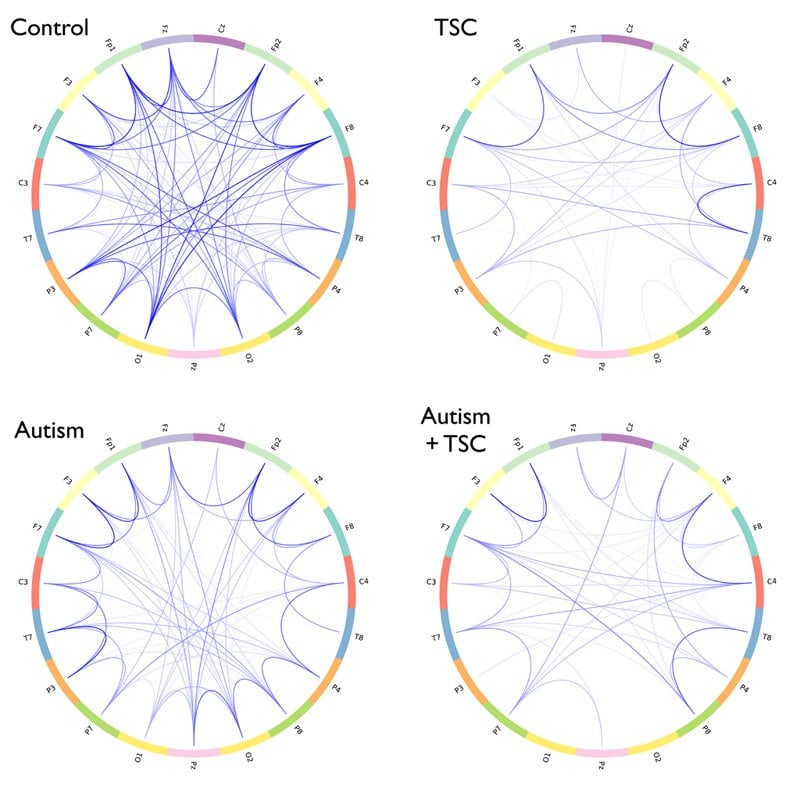 Brain Connections in Autism: This image illustrates connectivity between 19 different brain regions, based on EEG data from healthy neurotypical children and children with autism and/or tuberous sclerosis (TSC). Both groups of children with TSC show fewer brain connections overall, while both groups with autism have more connections between adjacent areas of the brain and fewer connections across distant areas. Children with both TSC and autism have a “double hit.” Credited to Boston Children's Hospital.
Home
Autism

Network Analysis of the Brain may Explain Features of Autism

A look at how the brain processes information finds a distinct pattern in children with autism spectrum disorders. Using EEGs to track the brain’s electrical cross-talk, researchers from Boston Children’s Hospital have found a structural difference in brain connections. Compared with neurotypical children, those with autism have multiple redundant connections between neighboring brain areas at the expense of long-distance links.

The study, using a “network analysis” like that used to study airlines or electrical grids, may help in understanding some classic behaviors in autism. It was published February 27 in BioMed Central’s open access journal BMC Medicine, accompanied by a commentary.

“We examined brain networks as a whole in terms of their capacity to transfer and process information,” says Jurriaan Peters, MD, of the Department of Neurology at Boston Children’s Hospital, who is co-first author of the paper with Maxime Taquet, a PhD student in Boston Children’s Computational Radiology Laboratory. “What we found may well change the way we look at the brains of autistic children.”

Peters, Taquet and senior authors Simon Warfield, PhD, of the Computational Radiology Laboratory and Mustafa Sahin, MD, PhD, of Neurology, analyzed EEG recordings from two groups of autistic children: 16 children with classic autism, and 14 children whose autism is part of a genetic syndrome known as tuberous sclerosis complex (TSC). They compared these readings with EEGs from two control groups—46 healthy neurotypical children and 29 children with TSC but not autism.

In both groups with autism, there were more short-range connections within different brain region, but fewer connections linking far-flung areas.

A brain network that favors short-range over long-range connections seems to be consistent with autism’s classic cognitive profile—a child who excels at specific, focused tasks like memorizing streets, but who cannot integrate information across different brain areas into higher-order concepts.

“For example, a child with autism may not understand why a face looks really angry, because his visual brain centers and emotional brain centers have less cross-talk,” Peters says. “The brain cannot integrate these areas. It’s doing a lot with the information locally, but it’s not sending it out to the rest of the brain.”

Network analysis, a hot emerging branch of cognitive neuroscience, showed a quality called “resilience” in the children with autism—the ability to find multiple ways to get from point A to point B through redundant pathways.

“Much like you can still travel from Boston to Brussels even if London Heathrow is shut down, by going through New York’s JFK airport for example, information can continue to be transferred between two regions of the brain of children with autism,” says Taquet. “In such a network, no hub plays a specific role, and traffic may flow along many redundant routes.”

This quality of redundancy is consistent with cellular and molecular evidence for decreased “pruning” of brain connections in autism. While it may be good for an airline, it may indicate a brain that responds in the same way to many different kinds of situations and is less able to focus on the stimuli that are most important.

The study showed that both groups of children with tuberous sclerosis complex had reduced connectivity overall, but only those who also had autism had the pattern of increased short-range versus long-range connections.

Under a recently announced NIH Autism Center of Excellence Grant, Peters and his colleagues will repeat the analysis as part of a multicenter study, taking EEG recordings prospectively under uniform conditions.

The current study builds on recent work by Peters, Sahin and colleagues, which imaged nerve fibers in autistic patients and showed structural abnormalities in brain connectivity. Other recent work at Boston Children’s, led by Frank Duffy, PhD, of Neurology, looked at “coherence,” or the degree of synchrony between any two given EEG signals, and found altered connectivity between brain regions in children with autism.

Yet another recent study, led by Boston Children’s informatics researcher William Bosl, PhD, and Charles A. Nelson, PhD, research director of the Developmental Medicine Center, looked at the degree of randomness in EEG signals, an indirect indicator of connectivity, and found patterns that distinguished infants at increased risk for autism from controls.