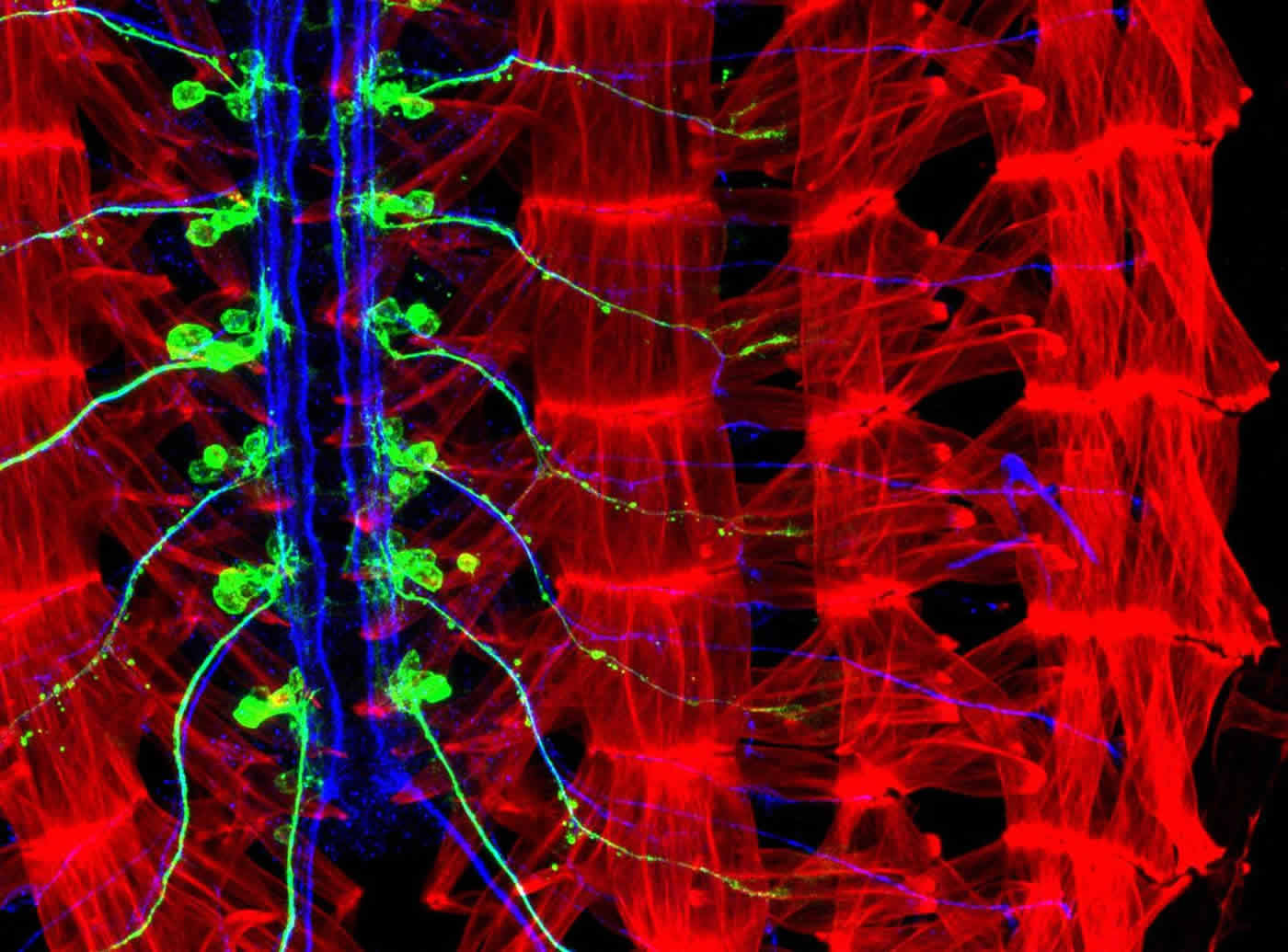 This is a confocal microscopy image of the young Drosophila (fruitfly) nervous system. The green label shows the neurons where the microRNA investigated in our study exerts its actions. The red signal shows the embryonic muscles and the blue label shows other neurons involved in motor control. Credit: Claudio Alonso.

A Novel Link Between Movement Control and Genetics

A small molecule in cells that was previously believed to have no impact on animal behaviour could in fact be responsible for controlling precise movements, according to new University of Sussex research.

The team at Sussex, led by Dr Claudio Alonso, found that fruit flies had difficulty in righting themselves when placed upside down after changes were made to tiny pieces of their genetic material encoding microRNAs (miRNAs).

MiRNAs are molecules encoded in the genome of all animals, including humans, that regulate the activity of individual genes.

MiRNAs have been shown to affect the formation of the nervous system, but the Sussex-led research due to be published on-line in Science on Thursday (22 October) is the first to show that they might also have very specific roles in controlling certain movements.

Dr Alonso, a Wellcome Trust Investigator and Reader in Developmental Genetics in the School of Life Sciences, explains: “We know very little about how simple movements are encoded in the genome.

“Yet, the survival of all animals – including humans – strongly depends on our ability to perform simple movements since the moment of birth, such as primitive reflexes essential for feeding.”

“This knowledge might in the long-term contribute to the understanding of the underlying mechanisms of human disorders of the nervous system that lead to loss of movement coordination, such as Parkinson’s disease.”

The researchers had originally tried ‘switching off’ individual microRNA molecules to investigate how this affected the formation of fruit flies’ nervous systems.

This was when they discovered that fruit flies lacking a specific miRNA could not correct their position when placed upside down.

Dr Alonso and his team are now turning their attention to whether different miRNA molecules could be responsible for other movements both in the fruit fly and in other organisms.

Fruit flies are small insects that are often used for genetic research as they reproduce quickly, are easy to breed in laboratory conditions and share many of the same fundamental mechanisms and pathways found in more complex organisms such as humans.

The research was primarily carried out by Dr Joao Picao-Osorio and Dr Alonso, and was further strengthened by Dr Jamie Johnston (also at Sussex) and Drs Matthias Landgraf and Jimena Berni at the University of Cambridge.

Funding: The work was supported by the Wellcome Trust, Biotechnology and Biological Sciences Research Council.

The relationship between microRNA regulation and the specification of behavior is only beginning to be explored. Here we find that mutation of a single microRNA locus (miR-iab4/8) in Drosophila larvae affects the animal’s capacity to correct its orientation if turned upside-down (self-righting). One of the microRNA targets involved in this behavior is the Hox gene Ultrabithorax whose derepression in two metameric neurons leads to self-righting defects. In vivo neural activity analysis reveals that these neurons, the self-righting node (SRN), have different activity patterns in wild type and miRNA mutants while thermogenetic manipulation of SRN activity results in changes in self-righting behavior. Our work thus reveals a microRNA-encoded behavior and suggests that other microRNAs might also be involved in behavioral control in Drosophila and other species.

A Good Night’s Sleep Is a Tonic to Remember