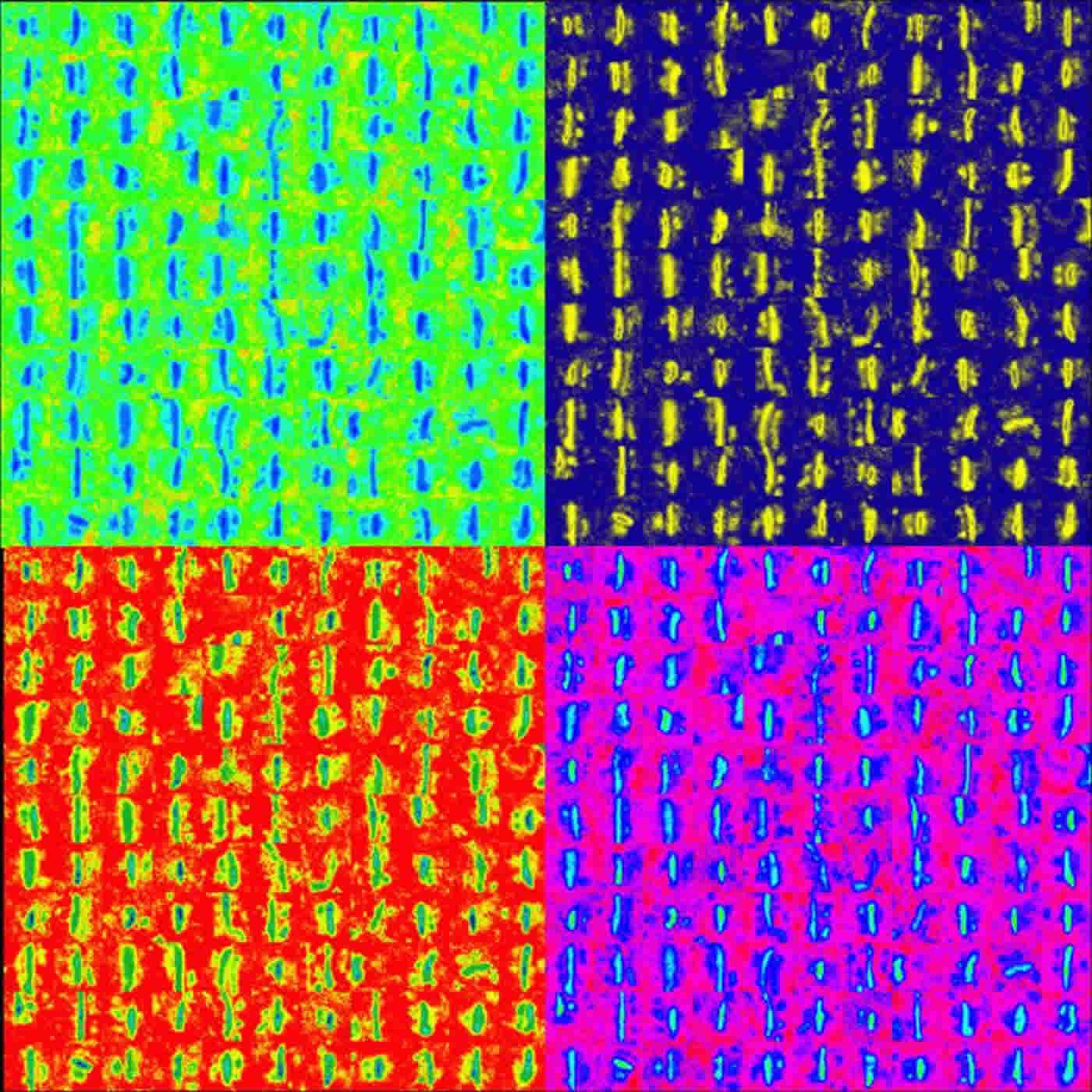 This image shows synapses in the somatosensory cortex stained with ethanolic phosphotungstic acid and visualized using electron microscopy. Synapses were identified using a Carnegie Mellon-developed machine learning algorithm that enables a high-throughput analysis of experience-dependent changes in synapse properties across the cortical column. For this image, candidate synapses were selected from electron micrographs and aligned, then pseudocolored for contrast. Credit: Saket Navlakha and Alison Barth; the Journal of Neuroscience.

Carnegie Mellon University researchers have developed a new approach to broadly survey learning-related changes in synapse properties. In a study published in the Journal of Neuroscience and featured on the journal’s cover, the researchers used machine-learning algorithms to analyze thousands of images from the cerebral cortex. This allowed them to identify synapses from an entire cortical region, revealing unanticipated information about how synaptic properties change during development and learning. The study is one of the largest electron microscopy studies ever carried out, evaluating more subjects and more images than prior researchers have attempted.

As the brain learns and responds to sensory stimuli, its neurons make connections with one another. These connections, called synapses, facilitate neuronal communication, and their anatomic and electrophysiological properties contain information vital to understanding how the brain behaves in health and disease. Researchers use different techniques, including electron microscopy, to identify and analyze synapse properties. While electron microscopy can be a useful tool for reconstructing neural circuits, it is also data and labor intensive. As a result, researchers have only been able to use it to study small, targeted areas of the brain until now.

Studying a large section of the brain using traditional electron microscopy techniques would result in terabytes of unwieldy data, given that the brain has billions of neurons, each with hundreds to thousands of synaptic connections. The new technique developed at Carnegie Mellon simplifies this problem by combining a specialized staining process with machine learning.

“Instead of getting perfect information from a tiny part of the brain, we can now get lower-resolution information from a huge region of the brain,” said Alison Barth, professor of biological sciences and interim director of Carnegie Mellon’s BrainHub neuroscience initiative. “This could be a great tool to see how disease progresses, or how drug treatments alter or restore synaptic connections.”

This research is the latest example of how researchers with Carnegie Mellon’s BrainHub research initiative are combining their expertise in biology and computer science to create new tools to advance neuroscience. The technique uses a special chemical preparation that deeply stains the synapses in a sample of brain tissue. When the tissue is imaged using an electron microscope, only the synapses can be seen, creating an image that can be easily classified by a computer program. Researchers then use machine learning algorithms to identify and compare synapse properties across a column of the cerebral cortex.

To test the effectiveness of their technique, the researchers, led by Santosh Chandrasekaran, examined how synapses across a complex circuit, composed of hundreds of interconnected neurons, would change with altered somatosensory input. In the past, Barth has used this model to study how neurons behave and synapses form in both learning and development. But traditional techniques only allowed her to look at neurons in a very small area of the neocortex.

“It was like looking for the perfect gift, but only going to one store. We might have been able to find something at that first location, but it was always possible that we might find something else – maybe even something better – at another place,” said Barth, who is a member of the joint Carnegie Mellon/University of Pittsburgh Center for the Neural Basis of Cognition (CNBC). “This new technique allows us to look across all six layers of the neocortex, and to see how synapses across different parts of the circuit change together.”

The researchers analyzed close to 25,000 images and 40,000 synapses, exponentially more than they were ever able to look at before using traditional methods. They found that the technique could be used to determine increases in synapse density and size during development and learning. Most notably, they found that synapse properties changed in a coordinated way across the entire region of the neocortex examined.

“Some of the cortical layers we saw were most affected have never been examined systematically before,” explains Barth. “We’ve got a lot of great leads to follow up on.”

The researchers are now beginning to use this data to develop new hypotheses about how synapses are organized in the neocortex in response to sensory input.

Funding: This research was funded by the National Institutes of Health (DA017188, MH099784), the McKnight Foundation, the Society for Neuroscience, the National Science Foundation (135-6505) and the James S. McDonnell Foundation.

Neocortical circuits can be altered by sensory and motor experience, with experimental evidence supporting both anatomical and electrophysiological changes in synaptic properties. Previous studies have focused on changes in specific neurons or pathways—for example, the thalamocortical circuitry, layer 4–3 (L4–L3) synapses, or in the apical dendrites of L5 neurons— but a broad-scale analysis of experience-induced changes across the cortical column has been lacking. Without this comprehensive approach, a full understanding of how cortical circuits adapt during learning or altered sensory input will be impossible. Here we adapt an electron microscopy technique that selectively labels synapses, in combination with a machine-learning algorithm for semiautomated synapse detection, to perform an unbiased analysis of developmental and experience-dependent changes in synaptic properties across an entire cortical column in mice. Synapse density and length were compared across development and during whisker-evoked plasticity. Between postnatal days 14 and 18, synapse density significantly increases most in superficial layers, and synapse length increases in L3 and L5B. Removal of all but a single whisker row for 24 h led to an apparent increase in synapse density in L2 and a decrease in L6, and a significant increase in length in L3. Targeted electrophysiological analysis of changes in miniature EPSC and IPSC properties in L2 pyramidal neurons showed that mEPSC frequency nearly doubled in the whisker-spared column, a difference that was highly significant. Together, this analysis shows that data-intensive analysis of column-wide changes in synapse properties can generate specific and testable hypotheses about experience-dependent changes in cortical organization.

SIGNIFICANCE STATEMENT Development and sensory experience can change synapse properties in the neocortex. Here we use a semiautomated analysis of electron microscopy images for an unbiased, column-wide analysis of synapse changes. This analysis reveals new loci for synaptic change that can be verified by targeted electrophysiological investigation. This method can be used as a platform for generating new hypotheses about synaptic changes across different brain areas and experimental conditions.