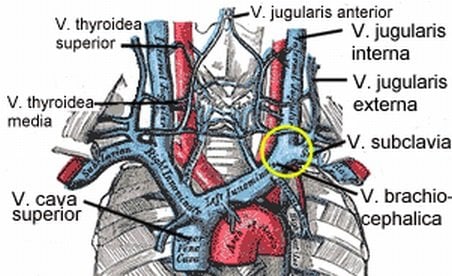 Neuroscientist Paolo Zamboni, described CCSVI as a disorder in which the veins draining the CNS are abnormal. The image shows Veins of the neck. V.jugularis interna is stenosed or has a malformed valve that leads to CCSVI. The smaller veins that provide collateral circulation are visible in patients with CCSVI on the MRV investigation. Credited to Grays Anatomy.
Home
Featured

Results of a study using several imaging methods showed that CCSVI (chronic cerebrospinal venous insufficiency) occurs at a low rate in both people with multiple sclerosis (MS) and non-MS volunteers, contrary to some previous studies. The research by an interdisciplinary team at The University of Texas Health Science Center at Houston (UTHealth) was published in the Annals of Neurology.

“Our results in this phase of the study suggest that findings in the major veins that drain the brain consistent with CCSVI are uncommon in individuals with MS and quite similar to those found in our non-MS volunteers,” said Jerry Wolinsky, M.D., principal investigator and the Bartels Family and Opal C. Rankin Professor of Neurology at The UTHealth Medical School. “This makes it very unlikely that CCSVI could be the cause of MS, or contribute in an important manner to how the disease can worsen over time.” Wolinsky is also a member of the faculty of The University of Texas Graduate School of Biomedical Sciences at Houston and director of the UTHealth MS Research Group.

CCSVI has been described by Italian neurosurgeon Paolo Zamboni, M.D., as a new disorder in which veins draining the central nervous system are abnormal. Zamboni’s published research linked CCSVI to MS. Not all researchers have been able to duplicate his results.

UTHealth was one of three institutions in the United States to receive an initial grant to study CCSVI in multiple sclerosis (MS). The grant was part of a $2.3 million joint commitment from the National MS Society and the MS Society of Canada.

The UTHealth team tested several imaging methods including ultrasound, magnetic resonance imaging with an intravenous contrast agent, and direct radiologic investigation of the major veins by direct injection of veins with radio-opaque contrast. The goal was to validate a consistent, reliable diagnostic approach for CCSVI, determine whether CCSVI was specific to MS and if CCSVI contributed to disease activity.

The team was blinded to the participant’s diagnosis throughout the study. Doppler ultrasound was used to investigate venous drainage in 276 people with and without MS. Using the criteria described by Zamboni for the diagnosis of CCVSI, UTHealth researchers found less prevalence of CCVSI than in some previous studies and no statistical difference between those with MS and those without MS. Detailed experience with the other imaging approaches are being readied for publication.

Multiple sclerosis is an unpredictable, often disabling disease of the central nervous system, interrupting the flow of information within the brain and from the brain to the body. It affects more than 400,000 people in the United States and 2.1 million in the world.

New Gene Implicated in ALS and Other Motor Neuron Diseases